At the beginning of the series, we hear Izuku Midoriya say, “all men are not created equal.” Even though he is referring to quirks (superpowers), I believe we, as Christians, do the same. We put ourselves down when we compare ourselves to others. We compare their gifts to ours, or we examine what they have to what we don’t. Unfortunately for some, they have been led astray because they don’t feel ‘good enough,’ but in Christ, this is not the case. 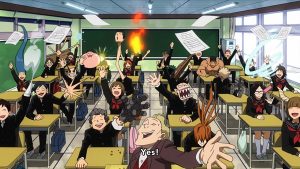 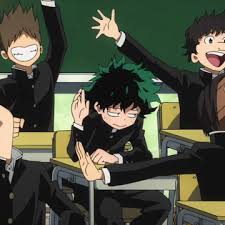 In the first season of My Hero Academia, we are constantly reminded of Midoriya’s quirklessness. Everywhere he goes, he is shown to be weak. In the classroom, Midoriya is the only student without powers. He even carries a ‘Hero Analysis for the Future’ notebook despite being told that he will never have a quirk. Regardless, he still holds onto a dream that may never come true. Then one day, Izuku runs into All Might, his childhood hero, and asks him:

Izuku: “Could I ever hope to be someone like you?”

All Might:  “…No, I honestly don’t think you can become a hero without a quirk.”

After Izuku’s encounter with All Might, Izuku is distraught. He always knew the chance of him becoming a hero was slim to none, but after All Might denied him, he felt like there was no hope for him. As Izuku walks home, sulking in the denial he just received, he sees a crowd of people. He looks to see a villain ravaging and raging in a small alleyway as it tries to absorb Katsuki Bakugo’s body and power. No hero present can help in this situation; they somehow don’t have the quirk to stop it. Before Izuku could realize how dangerous the situation is, he runs quirkless towards the trouble because he couldn’t just “stand there and watch [Bakugo] die.” 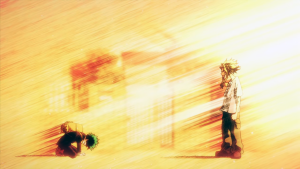 After getting scolded by the heroes about his reckless actions, Izuku is met by All Might on his way home. As All Might reflects on the day’s events, he tells Izuku that when he “saw this timid, quirkless boy try to save a life, It inspired [All Might] to act too.” After this, Izuku is chosen to be the next heir to All Might’s quirk, One-For-All.

As Christians, we all should aspire to be used by God. We all should desire to glorify Him with our gifts, but as I said earlier, some of us may lack gifts. In a world where people have extraordinary talents, sometimes we wonder if God can use us. In light of the first two episodes of My Hero Academia, All Might doesn’t choose Midoriya because of a ‘quirk’; neither does God choose us because of a gift.

Our gifts don’t cause God to choose us; It’s our hearts. When God had sought a king for Israel, he rejected what Samuel saw. He rejected man’s standard to a king because man saw what looked good while God saw what is good. In 1 Samuel 13, it says that the Lord had sought out a man after His own heart (someone who seeks to please the Lord); That man was David. 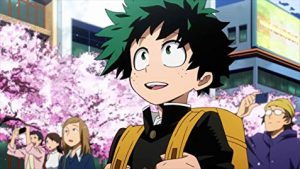 This is the standard that God uses for us to be chosen. When Izuku Midoriya was selected to inherit the quirk of All Might, Izuku had nothing to add to it. He had no quirk of his own, yet he was chosen because he had the heart of a hero. When God sent Samuel to Jesse’s house, God chose David, not because of his gifts, but because he had a heart after God. Gifts aren’t the reason God chooses to use us; it’s our hearts.