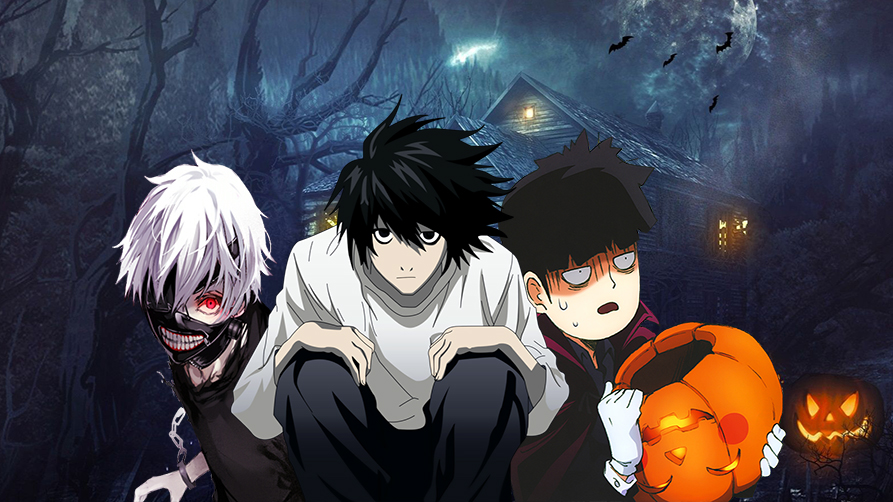 When I introduced the idea of a community article around the theme of Halloween, I knew it would be necessary to cast a wide net for the topic. Horror in anime is handled much differently than we are familiar with here in America. We have various articles on the site that explore how Christians should feel about Halloween, such as “Why You Shouldn’t Fear Halloween,” but we are not here to tackle that topic again. We chose these shows because they happened to take elements that the holiday is associated with and applied them well in their unique ways.

For this occasion, we chose to use the word “spooky” because it fits the range we were aiming for. We’ll explore the horrors of living among flesh-eating beings, mysterious books, and characters with psychic abilities. We also pull some biblical themes from a show that some might consider an honorary anime. Lastly, if you don’t participate in Halloween, we hope you’ll read on for some great recommendations.

Continue reading to find out our favorite spooky anime!

Horror isn’t my genre, neither animated or live-action. I’ve never been a fan of feeling scared or the adrenaline that comes from tense situations. That being said, what is Halloween, or spooky things in general, without ghouls? I used this opportunity to watch Tokyo Ghoul finally, and it fit the bill perfectly.

The show follows Ken Kaneki in a version of Tokyo that has ghouls living among regular human beings. This living situation wouldn’t be a problem except for the ghouls’ hunger only being satisfied by human flesh. Without spoiling specifics, Kaneki is a human who wakes up after an accident and finds that he has become a ghoul. He is joined by a ghoulish cast of supporting characters as he tries to figure out what happens now that his entire life has changed. 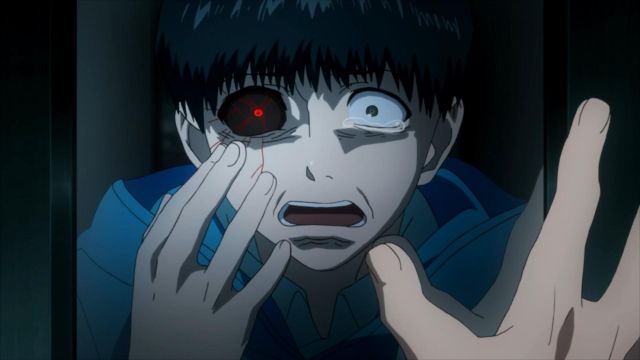 Tokyo Ghoul doesn’t fit into the horror genre, but the dark themes, violence, gore, and the setting of a world where people are always in danger, but also a world where the dangers and horrors have become normal, definitely keeps the tone in the spooky category. There were moments during the first season that made me uncomfortable, and I find myself thinking about several of the questions that the show brings up. Whether it’s wondering if ghouls deserve to live their lives like regular human beings or even getting into themes of self-sacrifice and if you should let go of things/people who are taking advantage of you.

Ghouls, monsters, and dark themes throughout? This is a show worth watching during this spooky season, but don’t be surprised if it keeps you up at night.

Can you imagine a world where someone can kill you at a moment’s notice, simply by writing your name in a notebook? That’s the premise of Death Note; high school student Light Yagami discovers a notebook capable of just that. The supernatural origins and powers of the notebook and the heavy involvement of shinigami are what led us to decide that Death Note qualifies as a spooky anime. But that’s not what terrifies me about this show.

Do you know those moments in horror movies, where you cringe and turn away because a character has no idea they’re about to get axed? Now, have you ever thought about how you cringe and turn away in the same manner when you can’t believe a character would do something so awful, right before they do it? Death Note is the second kind of cringe. Light becomes obsessed with his godlike powers, and the lengths he goes to protect those powers are only matched by the lengths world-class detective L and his allies will go to find the culprit. For example, those who have seen the show might remember a particularly terrifying car ride or the many people that Light is willing to use, abuse, and cast aside for the sake of his power-as-ideology. 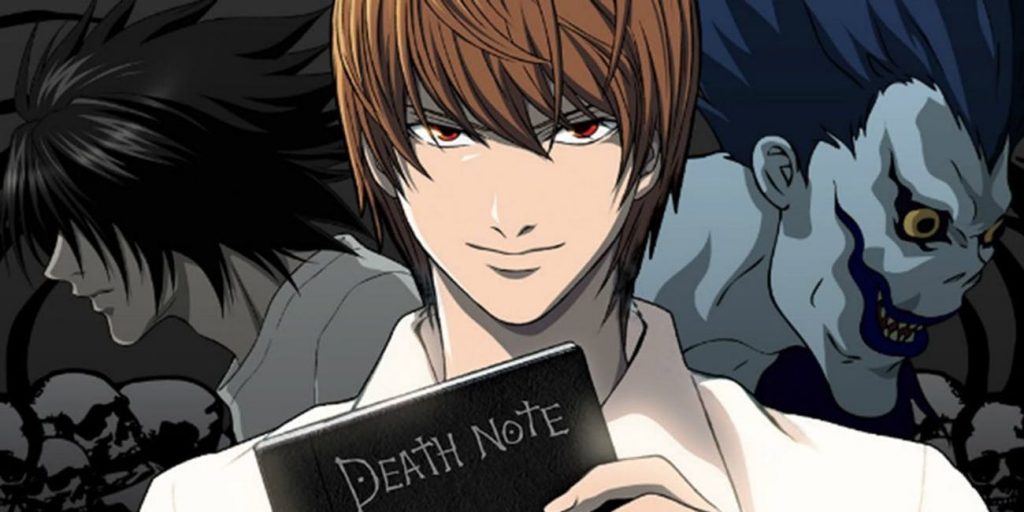 In traditional television, there’s often pressure to “raise the stakes” in a season finale, and it often becomes unbelievable when the writers don’t follow up on that premise in the next season. In Death Note, the stakes are quite real, and they’re continuously taken as far as they go. Quite appropriately, that’s how the show ends. I found myself cringing and turning away even then, asking myself, “Is this really how it has to end?”. Death Note won’t give you nightmares full of scary monsters like Attack on Titan would, but it will leave you adequately spooked if you, like the writers, stop and think about the evils of which humanity is truly capable.

Dracula stands out as one of the all-time best monsters of Halloween. Take a look around at the Halloween decorations, and it only takes a few seconds to find an image of Dracula or a vampire because they are an essential part of Halloween. Netflix released a Castlevania animated series based partly on the classic NES game Castlevania 3. It’s a highly recommended series which you can read more about in this article by Tyrone Barnes. The Castlevania series explores the background and lives of its characters, and it also dives into themes about religion versus humanism and the church versus science. Unfortunately, the series takes the view that religion and the church are trying to hold back progress, which could bring help to people, but I would encourage you to watch the series to see for yourself. One of the more poignant scenes in the series late in the first season between the Bishop and a demon got me thinking when I watched it. 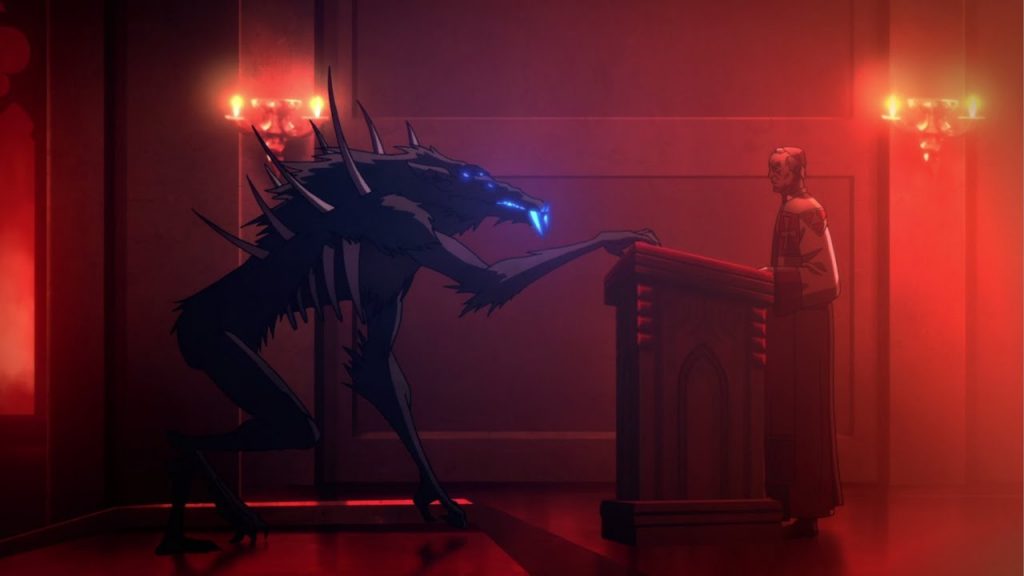 I find this exchange interesting since I agree with some of what the demon is saying because a church is just a building, and there is nothing special that God grants the structure just because it’s a church. In Matthew 18:15-20, Jesus sets out the steps that a Christian must take to confront a fellow Christian. I want to focus on the end of the passage, which states, “For where two or three are gathered in my name, there am I among them.” We strengthen each other when we gather together as believers, and the importance of gathering together with other believers is so crucial. What the Bishop lacks in the scene, first of all, is any real faith, but after that, he requires fellow believers to come around him and support him. We need to remember that God wants us to build each other up.

Mob Psycho 100 is about a student by the nickname of Mob with extraordinary psychic abilities. However, he expresses very little emotion to prevent himself from using those abilities since he cannot control them. With his skillset comes the supernatural ability to see and exorcise spirits in our world.

What I enjoy most about this show is the comedy, though there is much more to it. The character of Reigan is the main comic relief—a fraud psychic that Mob has reached out to in hopes that he can learn to control his powers. Of course, Mob doesn’t know his true colors, and it is entertaining to watch Reigan fake his way out of every situation. 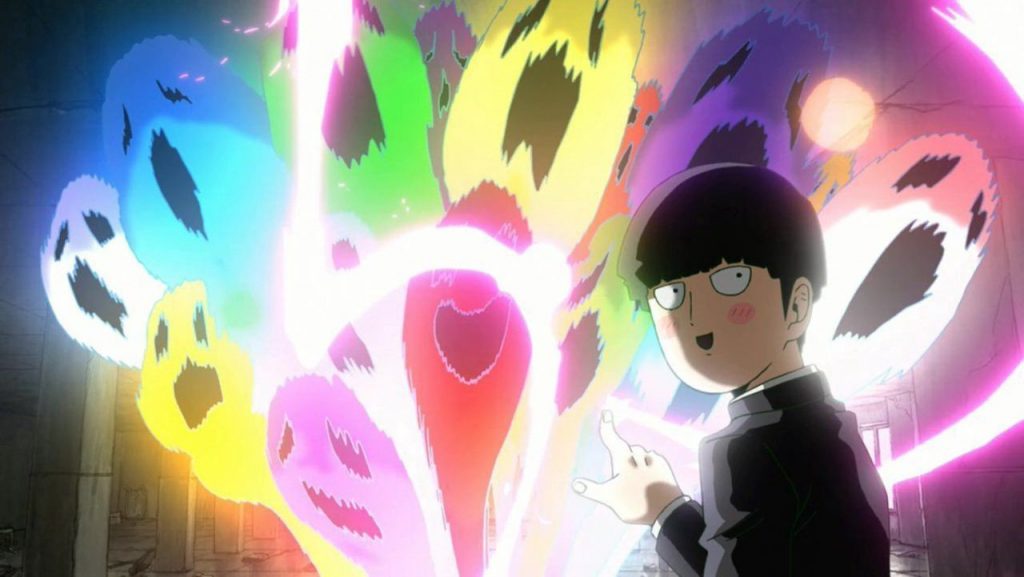 I enjoy the action and serious moments, as well. Most of the episodes build up to the moment that Mob unleashes his true strength, hence the “100” in Mob Psycho 100. I’d love to share one of my favorite scenes here, but I’d rather not spoil it for anyone who hasn’t watched the show yet, but the development of a particular character takes a turn that I never saw coming.

Due to the supernatural themes, I thought this show was a great fit when putting together this article.

Do you have a favorite “Spooky” anime? Tell us in the comments!