Prepared to Take A Stand at Otakon 2014 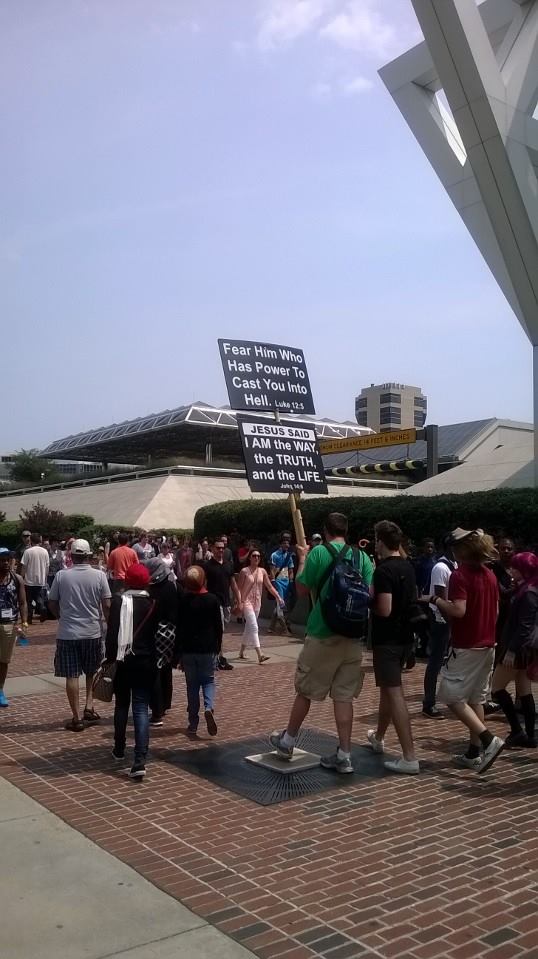 This past weekend, I attended my eleventh Otakon in a row. It’s a summer tradition I started in 2004 when I was sixteen, and I haven’t missed one since. While some years are more fun than others, I always leave with the anticipation of the next year in mind (though praise God that He healed me from my absurd depressive states that used to ensue when the convention ended!). This year brought something I haven’t witnessed in previous years: street preachers. While I previously called them protestors (referring in particular to one guy who stood outside the convention center itself, although my friend who actually saw them said there were two), it doesn’t look like they targeted Otakon alone, so I don’t think it fair to say that they were protesting Otakon.

Anyway, there were a total of three groups present this year: the guy pictured above, who my friend posted a picture of on Friday; the Baltimore Israelites, who stood near my hotel on Saturday; and an unnamed group, who simply held signs on a street corner on Sunday. The focus of everything here is on the guy pictured above because (and especially at the time) I was under the impression that he was specifically targeting Otakon.

As I heard it from my friend, what he was preaching was essentially the gloom-and-doom “you’re all going to hell” type of message. In my opinion, this is poor witnessing. At best, you may coerce people to come to God out of fear, but what happens when that fear wears off? At worst, you just give people the occasion to mock the Gospel. I’m not saying that we should be soft on sin, but what good is preaching if it lacks the good news? Again, I will admit that I spent the weekend thinking this guy was specifically targeting Otakon attendees, so what I did (and what I’m about to share) came from that.

Every year, on the last day of the convention, Otakon has a feedback panel, where attendees can line up and share what they liked or didn’t like about the convention with members of Otakorp, the organization that runs Otakon. I hadn’t intended to go this year, but when the dealer’s room closed I wasn’t quite ready to leave, so my wife and I went up to the feedback panel anyway. At some point, a thought occurred to me, and I acted on it. I stood up, got in line, and waited. And waited. And waited. Hey, there were a lot of people. When I finally got my turn on the microphone, this is the gist of what I said:

This is my eleventh Otakon, and it was the first time I have ever seen Christian protestors at the convention. I bring this up because, two years ago, I became a Christ-follower myself, and as you can see I’m still here. Are there things that I see at Otakon that I don’t agree with? Yes, but I deal with them on my own. I don’t take them out on other people. As I understand it, this guy was preaching a gloom-and-doom message, and I just want to say that we’re not all like that. If you felt hated, if you felt condemned, if you felt unloved, then on behalf of all Christendom I apologize.

To be clear (because I worry about lying), the above is not word-for-word what I said. It’s my best attempt at recollecting the general point I was making. Now, in my mind, I figured I might get a round of applause from the room and walk away feeling content that I spoke up. I was not prepared for what actually happened. First off, one of the Otakorp people thanked me for saying that, and then the expected round of applause ensued. As I headed back to my seat, though, a woman stopped me. While I won’t share her story (because it’s not my place), I will say that she was a Catholic who was going through some tough spiritual troubles. I had the privilege to listen to her and, as best I could, counsel her in her worries. I won’t say I did a great job, but I definitely felt like I at least had some answers for her. At the end of it, I was given the privilege to pray for her.

During this time, I also had another woman approach me (it should be mentioned that I mentioned Geeks Under Grace at the microphone to make a point that there are Christians who are into geeky stuff, and that they didn’t have to just take my word for it) who talked to me briefly and said she would be creating an account on the site. A few more people even approached me and thanked me for what I said. In short, it seemed like what I intended to be a simple statement touched a few more people more deeply than I intended. By the end of it all, I was simply blown away (and at one point ready to cry even).

My point in sharing this is that I was able to do something for God in all of this that I never imagined. Sure, my wife and I (well, mostly my wife, because she’s more assertive than I) handed out tracts throughout the weekend, but whether people actually bothered to read them or not I’ll never know. I do know, though, that the people in that room heard what I said. I know that I created an opportunity for doors to be opened and seeds to be planted–that maybe, just maybe, these people will get curious about God from what I said–or, if nothing else, maybe I broke down some stereotypes and showed people that there’s more to Christianity than scary signs and bullhorns (or whatever he was using). I don’t really know how it touched the majority of the people in that room, and that’s okay. What is important is that what seemed like a small, simple gesture at first turned into a much bigger opportunity.

To summarize and conclude, I’ll say this: God can use anything to give you a testimony. There was a time where public speaking scared me to death, and I just didn’t want to do it. Put me in karaoke though, and that was a different story…. anyway. I won’t say I wasn’t nervous up there, because that would be a lie, but I didn’t let that stop me, and as a result I was able to make a potential impact for God. That’s one of the hardest parts about this whole thing for me: keeping it about God. Even now, I feel like there may be too much “me” and not enough “Him” in this article, and I don’t really want it to be that way. Even as I was leaving the convention center, I felt myself being drawn to that point of wanting more people to acknowledge what I did. It’s a struggle, to be sure. I didn’t write this article to glorify myself, or to receive praise. My whole intention was to share this experience, and to share just how amazed I was by it. Blown away is really the best description I have.