Review: Aldnoah.Zero, Episode 13: This Side of Paradise 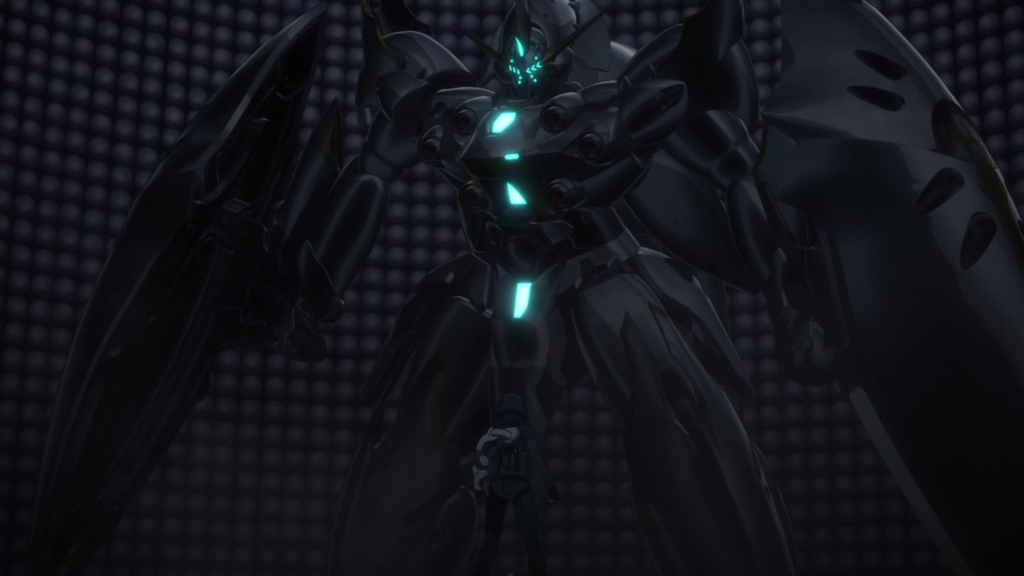 When we last left the story of Aldnoah.Zero, the Earth forces had managed to shut down the Versian invasion, and Princess Asseylum, Inaho, and Count Saazbaum were presumably dead. Now, we pick up 19 months later, with a brief reply to the ending events of episode twelve. Though the Earth forces may have gained a victory, thanks to Asseylum and Inaho, the war appears to be far from over, and our rag-tag group of high school kids are still very much enlisted in the army. Of course, the war doesn’t stop the animators from bringing us back to these characters via light fanservice, as three female characters are shown lounging on the beach early on. One must question the logic of this—after all, lull or no, beach lounging in the middle of a war just seems like a bad idea. This doesn’t last for long, though, and we are soon brought back into the action that we have come to expect from this series.

Elsewhere, we see that Slaine has made his decision about where he will go. The ending of the twelfth episode sort of left the viewers hanging in regards to Slaine’s fate, as he stood alone in a room with three, presumably dead, people. Now, of course, we know. On top of this, there seems to be a plan that has been hatched by the Martians, wherein Princess Asseylum appears to be advocating for further war against the Earthlings and total domination of the Earth. This also lends to the introduction of a new character, and a thus-far unanswered question for this viewer: specifically, how a certain character managed to reunite with the Vers. You’ll figure out to whom I’m referring when you watch, I’m sure.

Okay, now for some spoiler commentary. Read past this point at your own discretion.

One thing worth commenting on is the fact that Inaho ultimately comes back alive, and not only alive but also seemingly healed, save for a cybernetic eyeball. While it would be easy to jump on the criticism train and call the writers weak for not having the guts to kill off a protagonist a la George R.R. Martin, I have to say that I’m quite fond of Inaho and didn’t want him to be dead. Sure, the part of me that enjoys a good plot twist is probably disappointed, but I think the part of me that wanted Inaho alive was greater. Plus, Inaho’s classmates prove that they are pretty useless against the Martian Kataphrakts without him, especially evidenced by the fact that they struggle against one such unit in this episode, only to have Inaho come along, determine its weakness, and dispatch it within minutes.

On the other side of things is Slaine. As of now, I can’t say his change of character makes much sense. We see that he has ultimately sided with Count Saazbaum, who is somehow alive despite the number that Slaine did on him at the end of episode twelve. Hopefully, we will get some kind of explanation as to why Slaine has sided with someone who should realistically be his enemy. After all, Saazbaum helped orchestrate the failed murder of Asseylum, and then attempted to murder her with his own hands. We see in a flashback that were mere moments between Slaine pumping Saazbaum full of lead and then ultimately deciding to side with him. What changed? I would like to know, and I hope this will be further explored as we go along.

By the end of this episode, you are likely to have some questions. Maybe not many, but certainly some. Hopefully, we will begin to get answers as the second half of this series begins to flesh out. Until then, welcome back to the world of Aldnoah.Zero! Let’s see what other shocking surprises may be in store for us.

We see in this episode that Slaine has ultimately chosen to side with the Martians. The people who belittled him for being a Terran, attempted to kill his beloved princess, and then seemingly killed said princess in front of his eyes, are now his allies. Yes, I know that last one comes out in the wash, but still. Slaine has no logical reason for siding with the Martians, and, as of now, we have no idea why he chose to do so. I have an idea, though:

During his time with Count Saazbaum, Slaine heard why the Martians were choosing the path they were. At this point, I can only assume that Slaine was deluded into seeing the Martian plan as something noble or cause-worthy. The fact of the matter, though, is that the Martians chose to go about their plans through the murder and betrayal of their own princess, and the murder of millions (billions?) of innocent lives. No matter how noble their cause may be, their ends do not justify their means. However, looking back at our verse, we see that bad company corrupts good character. Time spent among such mindsets could certainly pervert Slaine’s thinking and convince him that these people had a logical justification for their actions. Remember that, as of now, this is all speculation on my part.

Life can be like that, though. We find ourselves dead set against something, but if we’re not careful—if we listen to the other voices without having a firm foundation in our own beliefs and/or without also surrounding ourselves with like-minded believers—we can slowly begin to slide into the other camp. At the very least, we begin to straddle the line, deciding that something we were once morally opposed to may not be “so bad,” at least in some circumstances. I’m not saying there aren’t times where we are wrong and need to be corrected; what I am referring to here are those issues that we should be uncompromising on while the unsaved world holds the opposing opinion and would love nothing more then for us to give up the fight. Listening to the other side can certainly give us insight as to why they feel the way they do, and may even strengthen our own position as we research the dissenting arguments and reaffirm why we believe what we believe, but we must also be vigilant to insure that we do not abandon the correct course of action in the process.

Nudity/Sex/Fanservice: Three female characters are shown relaxing on a beach—one in a t-shirt and bikini bottoms, one in a bikini (which shows cleavage; one shot also shows her maneuver in her chair, providing a close up of her bikini-clad butt), and one in a bikini, lying on her stomach—there is a brief close up of her butt as well

Violence: A character is shot twice; a space battle between human Kataphrakts and Vers ships shows exchanges of gunfire; a Versian Kataphrakt blows up several Terran Kats; a Martian Kat freezes and then steps on a human kat; a human kat engages a Versian kat with plenty of explosions, followed up by a close-up bullet barrage ending in a gigantic explosion