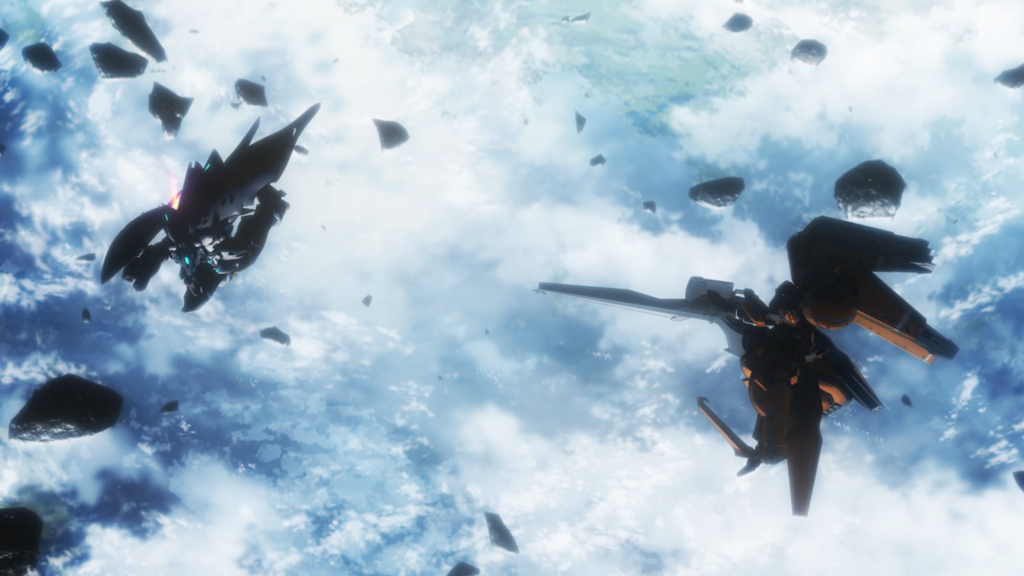 Aldnoah.Zero would more accurately be called “Inaho: The One Man Army.” Seriously. Despite the fact that he is surrounded by his classmates and soldiers, who are far more experienced, Inaho is seemingly the only one who can actually hit an enemy. This may change as time goes on—after all, the first half of the series did have times where Inaho needed his teammates in order to succeed—but thus far it seems as if Inaho is the one-man demolition team.

Okay, moving away from the over-powered nature of Inaho’s character, we also see more of Slaine in this episode. While I still don’t think we have a well-defined reason for his choosing to side with Saazbaum, there is an interesting exchange between the two of them following a conversation with the Vers emperor. It seems there may still be more to Saazbaum’s plan that what we have already seen.

There is a new plot element introduced which, without spoiling anything, will probably level the playing field a bit with respect to Inaho’s new implant-induced abilities. I think this is still very much a show centered on Inaho (and now the Inaho/Slaine rivalry), so at least there is now something that will present an on-going challenge for him.

While there wasn’t a lesson that stuck out to me for this particular episode, I think we can learn a little something about humility from Inaho. He has always been the star of the team—the brains, the one with the skills, the guy who gets the job done. Now he has a cybernetic eye, which provides him with even more of an advantage on the battle field. Despite all of this, we never get a feeling of pride from Inaho. He seems mission-focused and set on defeating his enemies, to be sure, but he never seems to mistreat his teammates or look down on them because his skills are better than theirs. As Christians, we should be the same: though we may excel in some area that others struggle with, we should not gloat, but rather come alongside them and support them, using our abilities to help them instead of putting them down.

Alcohol/Drug Use: The intro shows a character holding what appears to be a bottle of liquor

Blood/Gore: A brief shot of blood near the beginning of the intro; Inaho is shown with blood around one of his eyes in the intro