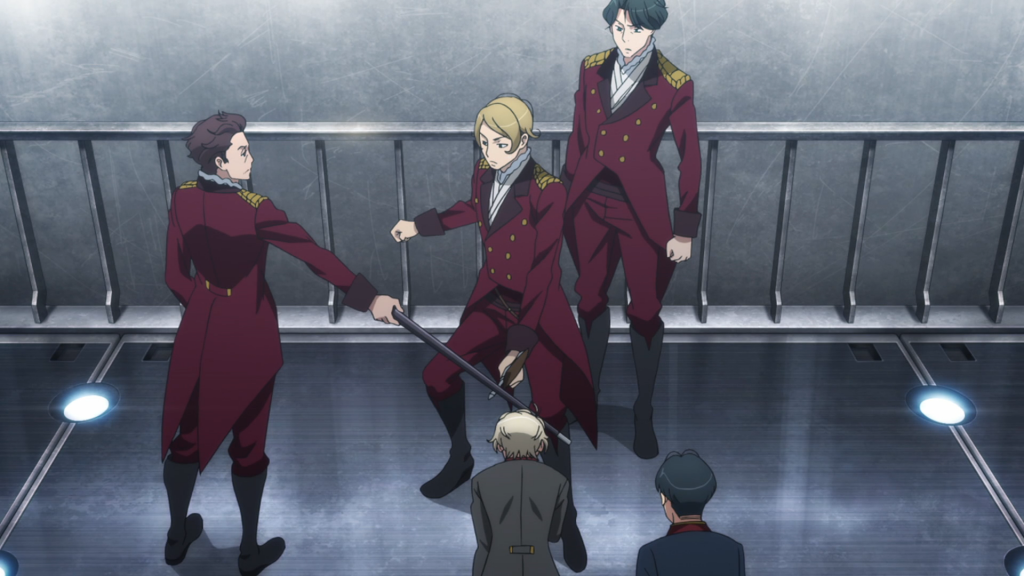 If Aldnoah.Zero was getting a little too predictable for you, then this episode should cure that disease. While the entire episode may not be filled with unexpected twists and turns, it is bookended with events that certainly fit that description. Early into the episode, we see that rank does not exclude Slaine from the anti-Terran attitude of some of his Versian allies. On the other side of the fence, we see the Earth forces preparing for the upcoming assault. There’s not much to say here; it’s not really a boring section of the episode, but there’s nothing noteworthy that comes to mind about it, either. The events in Slaine’s life are certainly much more exciting during this portion of the show.

The best parts of this episode are definitely the combat scenes, though. As should be expected, Inaho steals the spotlight during the fight, but when the combat ultimately boils down to Inaho vs. Slaine (which, let’s face it, is the ultimate rivalry in this show) then it makes sense that these scenes would follow Inaho’s exploits. It is during this portion of the episode that things get particularly tense, as one character shows up during a fairly intense scene and could certainly be seen getting killed off. The ultimate result, without spoiling anything, is quite unexpected and signals a turn in the overall events of the story. Where things will go from here is anybody’s guess.

Proverbs 10:10 – Whoever winks maliciously causes grief, and a chattering fool comes to ruin.

This may be a bit of an abstract application, but within this episode we see a character who was well-trusted by another betray that trust—ultimately for his own gain. When I think of the verse mentioned above, I think of someone who is a close friend saying something to someone else and then winking at you as an inside signal so you know what they say is false. That’s not exactly how things go in this episode, especially since we are not let in on the deception until it happens, but the idea of being betrayed by someone who pretended to be close to you is still there.

Violence: A flashback shows a character being shot; a man tries to hit Slaine with a sword scabbard, but is intercepted by Saazbaum; shots are exchanged in space combat; explosions and the general exchange of combat between enemy kataphrakts