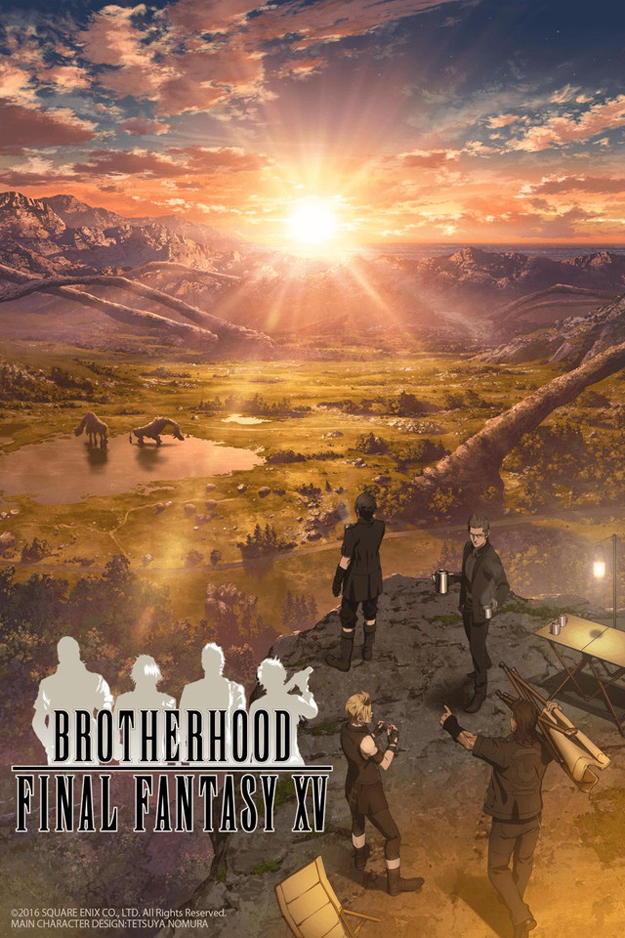 Final Fantasy XV has been in development for the past 10 years, and Square Enix is pulling out all the stops now that the release date is just around the corner. The upcoming game has already received a CGI film, Kingsglaive, and now released an anime adaptation, Brotherhood. (The last numbered installment to get that kind of treatment was the immortal Final Fantasy VII—and that was eight years after its original release.)

I’ve greatly enjoyed Square’s past Final Fantasy anime adaptations, Final Fantasy VII: Last Order and On the Way to a Smile—both lovely bonus materials for fans looking to revisit the tragedies of Nibelheim and the Sector Seven plate, but definitely more of a homage to nostalgia than stand-alone storylines. Going into Brotherhood, I expected a linear plot that would entertain fans (throwing in flashy fights for attention) but disinterest most outsiders. With the advent of Final Fantasy XV and its spin-off content, however, it’s clear that Square Enix has learned a lot since the days of polygonal protagonists and 8-bit fanfares.

Positive Content: Brotherhood makes good on its title, centering on themes of comradeship, loyalty, and interdependence. The four-man squad learns to overcome their individual fears as they find themselves thrust into a battle so much bigger than they are—and are all the more faithful to each other for it. Brotherhood portrays human weakness and error as part of the ebb and flow of life, and explores how bonds are deepened through vulnerability.

Each character features a unique set of admirable virtues which cleverly complement those of the other party members. Prompto, for example, is a caring soul who halts the road trip to tend to a wounded puppy on the roadside; a flashback into his childhood reveals it’s not his first experience nurturing wounded animals. It’s during this blast from the past that we’re shown Prompto’s persistence in overcoming childhood obesity (in a refreshingly healthy and realistic manner), and how that persistence translates into his willingness to doggedly follow Noctis to the end.

Despite angsty appearances, Noctis is revealed to be a very kind person. As a child, he’s shown to take responsibility for a younger playmate when she gets lost on the royal grounds. His is ultimately the story of a boy learning to rise to manhood. He’s pressured to excel because he knows the weight of his father the king’s responsibilities, and that those responsibilities will soon be on his own shoulders. Noctis’ relationship with his father is one of love and trust—almost Christ-like in its sense of guidance and provision—and culminates in a poignant display of spiritual protection. 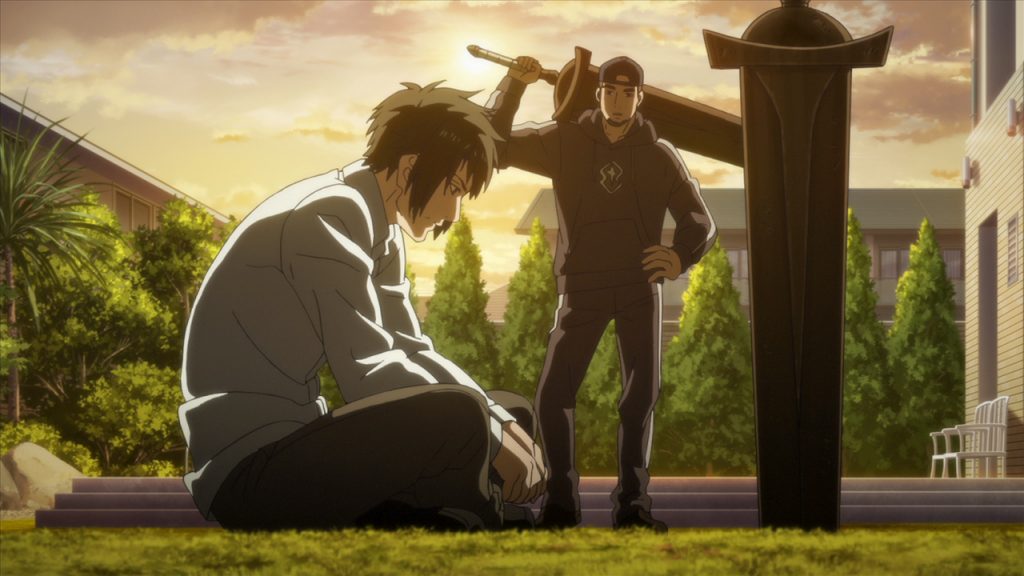 Coping with loss and accepting responsibility are our hero’s lot–struggles which will no doubt be expanded on in Final Fantasy XV.

Spiritual Content: A half-serpent, half-human monster is referred to as a daemon (archaic spelling of “demon”), though the creature is portrayed as evil and has no spiritual associations with Christianity’s understanding of demons. In any case, the use of daemons appears to be taboo in the world of Final Fantasy XV.

There are obscure references to magical walls which are powered by (and take a toll on) the king’s strength, as well as some magical-y attacks involving teleportation. All magic appears to be ingrained within the world itself and not the result of anything remotely occult.

Violence: Blades clash and shatter (mostly bloodlessly) off of furry and scaly monsters. Mechanical humanoids are trampled to pieces, shot, bisected, and dismembered amidst denting metal, snapping electrical cords, and buzzing wires (though not so much as oil spews in place of less pleasant innards).

When our heroes aren’t battling with androids, however, blood is realistically (though not gratuitously) shed. Humans are cut down in bloody swords strokes, with one pair stabbed multiple times while trapped in their car seats (we see their bloodied bodies afterward, though without graphic detail). Blood pools under a dead body, soaking a young boy at its side. While the boy’s chest and hand become coated in blood (and drips from his upheld fingers), his only injury is betrayed by a thin strip of red running between his eyes. A creature is slashed across the face and then forced off a cliff to its apparent death. Blood flows from an underwater wound. A half-humanoid, serpentine monster has multiple arms sliced off amidst purple waves of blood, followed by a very dramatic decapitation.

A car bursts into flames and explodes with drivers implied to be inside, though no bodies are shown. A curtain of blood pours over the screen of an arcade game, a la “game over.” A puppy is seen with a bloody cut on its leg (Prompto observes that the little guy can’t move due to a thorn stuck in the injury). 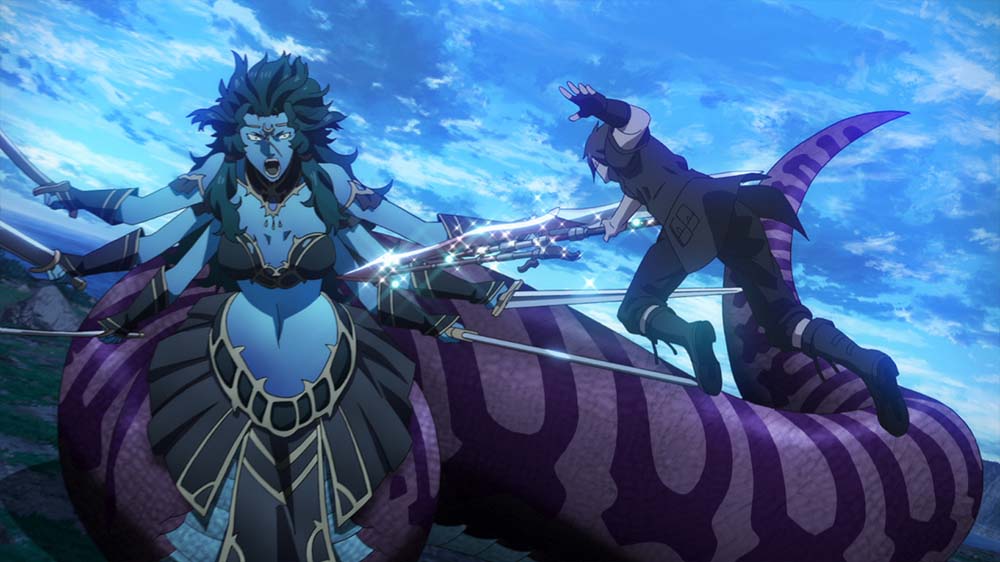 Ugly, scaly, and she doesn’t even drop loot.

Sexual Content: A humanoid serpent wears a bikini top, revealing modest cleavage and a bare midriff. This look is later sported by a couple of female NPCs, who Prompto takes innocent interest in.

Drug/Alcohol Reference: Nothing to note.

Brotherhood aims to introduce Final Fantasy XV’s four-man RPG party. That macho title isn’t just for show, either. In-between all the fist-bumping and back-slapping, there’s a hearty friendship at play—one that tactfully avoids fujoshi bait in all but the longest of shots. Each young man is treated as a character, rather than a pretty plot point, and given a 12-minute episode in the spotlight, with two bookend episodes tying everything in-between together. 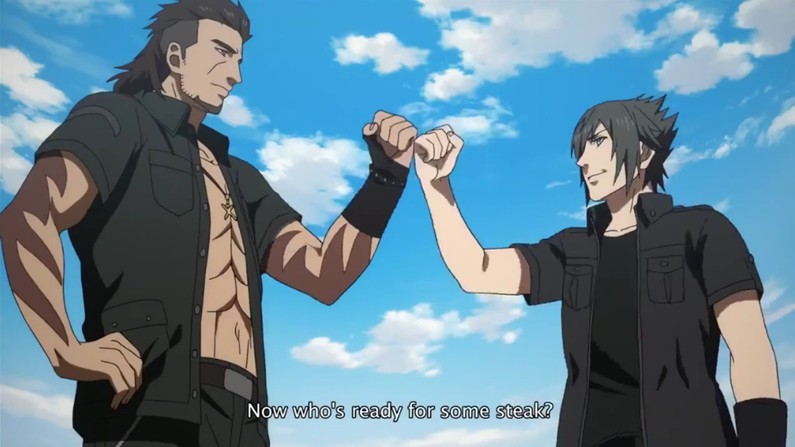 Pictured: the manliest screencap in the series.

At a glance, the characters seem archetypal, but there’s a surprising amount of individuality built upon their cookie-cutter foundations. Our hero, Noctis, is a moody, broody dude-y—somewhere between Squall Leonhart and Cloud Strife on the tragedy spectrum (and sporting a haircut that would do Sasuke Uchiha credit)—but Brotherhood convincingly lays out the rationale behind his angst (and pulls at a few heartstrings in the process). 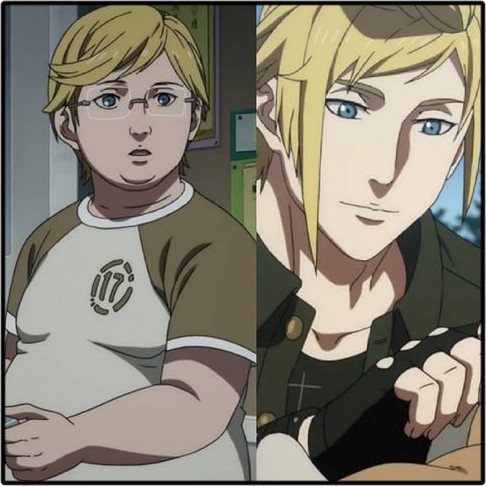 Be careful who you call ugly in middle school.

The cast, Noctis especially, are gradually molded through the unique perspectives of their bros-in-arms. Viewers aren’t so much told what to feel about the characters as they are shown how to feel about them based on their relationships with others. This results in a much more natural and well-rounded picture of the cast. Most of the development is conveyed through backstory, but in a manner that is neither cheap nor lazy. By the final episode, I felt like I’d taken a journey with these characters in about an hour’s time—something that many a 13-episode series has failed to accomplish.

Brotherhood appears to be the start of a Square Enix trend in truly individualizing characters beyond their backstories, affiliations, and goals; and diving into the down-to-earth hobbies, interests, and struggles that humanize them. The anime shrugs off its storyline in favor of its characters—and to great effect. Yes, there are smatterings of political intrigue involving magical walls and inter-kingdom wars, and more than a few flashy battles with serpentine monsters and mechanical minions, but far more time is dedicated to not-so-fantastical things—Prompto’s struggle with childhood obesity, for example. Brotherhood doesn’t shy away from intensity and navigates its darker moments well, but it’s at its best when the brooding curtain of destiny is stripped away and the cast is allowed to cut up, rescue puppies, ruin frying pans, and pick the lettuce off of their fast food. More than one moment of character-based comedy brought a genuine smile to my face. 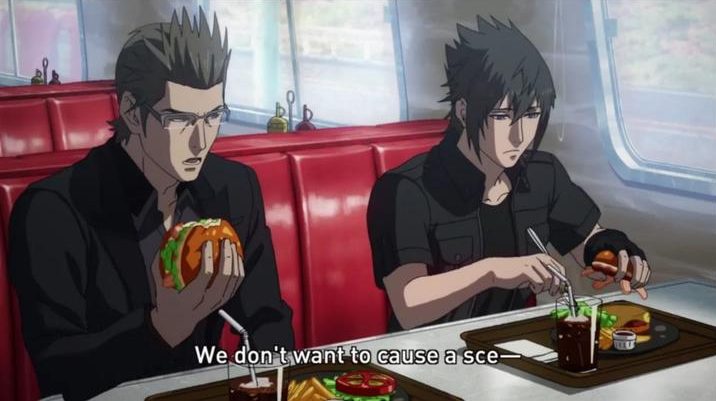 Understandably, with its focus on the four-man party, almost no development goes into side characters, including Noctis’ fiancé. Fortunately, Lady Lunafreya will be getting her own animated episode as an exclusive to Final Fantasy XV’s Ultimate Collector’s Edition.

Animation capabely handles the narrative, giving action scenes and sparse moments of violence more than a few effective angles, though nothing jaw-dropping. I was surprised not to see Ufotable or Studio Wit-level action-scenes here, given Square’s reputation for next-gen graphics. That’s not to say Brotherhood isn’t pretty to look at. Backgrounds often showcase a Ghibli-inspired level of cultural detail, and vehicles reflect the sun with iridescent realism. Clever writing overlaps with effective cinematics in ways that avoid cheap narrative tropes and outright “telling.” 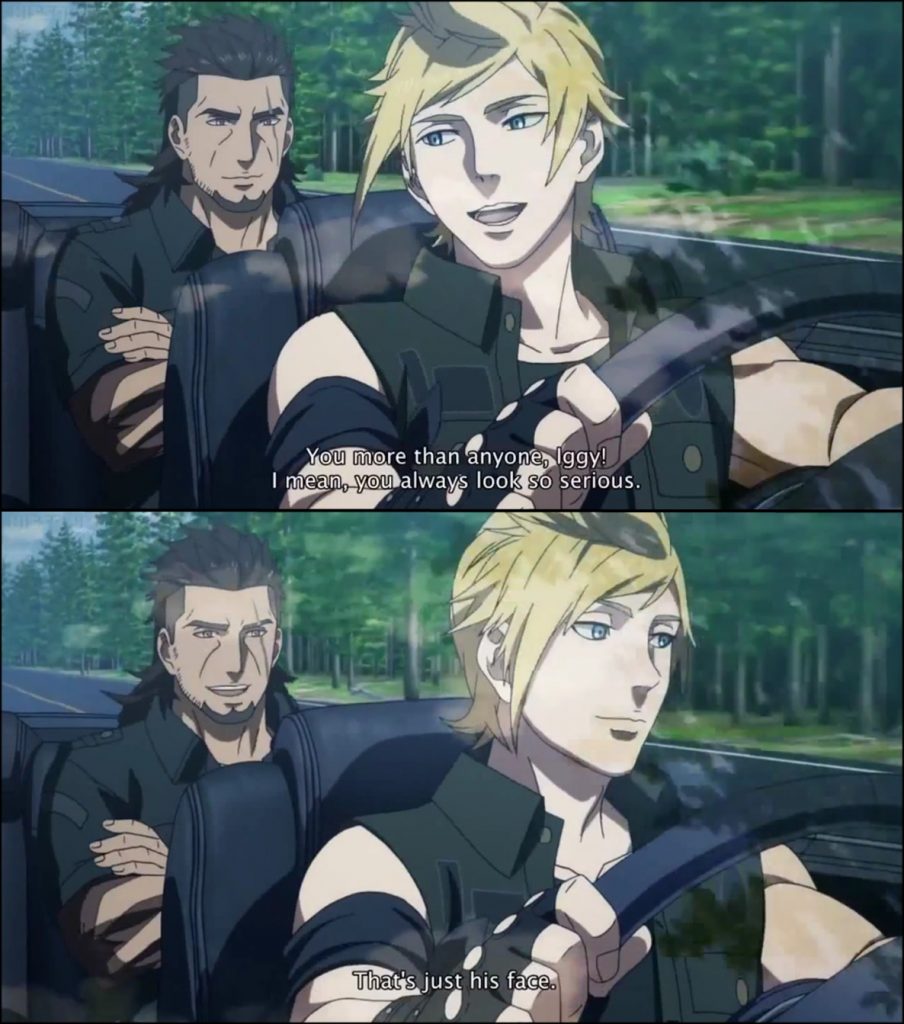 At that moment, Ignis became my spirit animal.

For example, it’s first revealed that Noctis is a prince-on-the-run from a fallen kingdom when the gang pit-stops at a local diner and a news piece airs on a nearby television. In order to stress the kingdom’s downfall on Noctis’ emotions, the camera captures his vibrating vision while the TV drones off into white noise. For a moment, a predictable PTSD flashback seems in store for the viewer’s information, only for the camera to rip away and reveal that the tremors are actually the real threat of an enemy ship passing by overhead. Cue the gang abandoning their lunch.

On the auditory side, the franchise’s award-winning orchestral soundtracks continue to work their magic, with acoustic vibes bringing out the laidback road-trip motif. I assume that all of the scores are taken directly from the game’s soundtrack, as I recognized many of them from gameplay demos, though a few of the more cinematic pieces were new to me. (Perhaps they were even anime originals?) Voice actors give satisfactory performances (though the subs are another story; I’m pretty sure “itadakimasu” doesn’t mean “My favorite!”).

At 12 minutes each, this 5-episode series is easy to knock out in a window of free time, and I highly recommend watching it in one go. The ONA originally released online, once a month, across a 5-month period, and while the middle episodes fared well as one-shots, the two bookend episodes’ connectivity lost a lot of impact due to the gap. 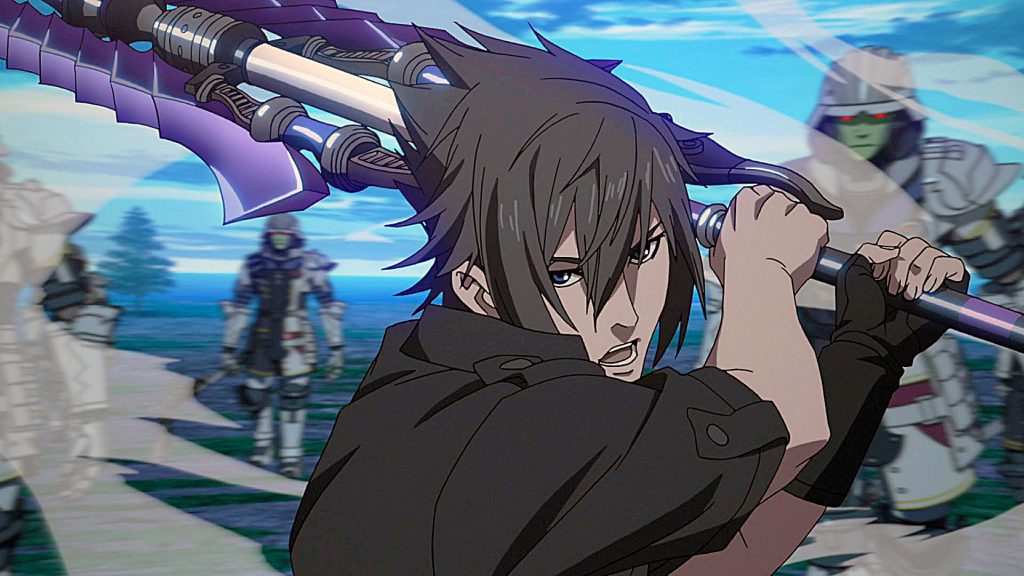 Brotherhood isn’t meant to be a stand-alone anime (and loses points when viewed as such). It’s a shameless teaser, but, as a teaser, it’s surprisingly effective. It doesn’t overstay its welcome, and ends before it runs out of (or over-extends) its ideas. It’s easy to follow as an entry point, though loose plot threads float ever-so-obscurely in the background, implying that the narrative needs Kingsglaive and Final Fantasy XV (specifically the Platinum Demo) in order to properly tie everything together.

Ultimately, Brotherhood achieves its goal of getting gamers invested in characters that they will soon be adventuring 100+ hours alongside. As such, I would consider it an unprecedented success for Square Enix’s multimedia expansion.

Ultimately, Brotherhood achieves its goal of getting gamers invested in characters that they will soon be adventuring 100+ hours alongside. As such, I would consider it an unprecedented success for Square Enix's multimedia expansion.