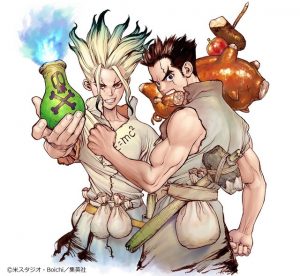 During a recent trip to Tokyo, I picked up a copy of the weekly Jump and saw on the cover a feature for a manga called ‘Dr. STONE‘—and although I didn’t have time to struggle through it with my sub-par Japanese and Google translate, it looked fascinating.

Upon arriving home, I was happy to discover that this manga was soon to be released as an anime on Crunchyroll. In an era of manga and anime that mostly focuses on futuristic, slice of life, and mystical fantasy elements, this appeared at first to be an anime set in the stone age—or rather, a new stone age. Thus the title. The premise is that every living creature in the world has been turned to stone quite abruptly by a light from the sky, which seems to be the only fantasy element for now. The rest of the anime is surprisingly realistic, barring a few bits that will hopefully be explained in more detail in future episodes. The two main characters, for very different reasons, are the only ones (so far) to maintain consciousness for what amounts to thousands of years. Eventually, because of some acid wearing down the rock shell, they break free and start trying to rebuild civilization.

Some positives to start: I like the premise. It’s creative where many anime today seem to copy and paste themes from each other. I can’t think of anything quite like it so far as the world and setting. It’s a strange combination of prehistoric and sci-fi with a dash of ‘Lord of the Flies’ that I can’t help but feel is foreshadowed.

The art is beautiful, reminding me of NieR: Automata‘s world in the best possible way. Cities are overgrown forests sprinkled with still-stone people. The style is well done, the cinematography showcases the new world well. There are some stunning shots that I felt like I could pause the show, screenshot it, and frame it. One scene, in particular, involved picking grapes, and I couldn’t help but pause it. After staring for minutes, it was hard to tell that the grapes were animated. The leaves, vines, and fruit were all meticulously lit, detailed, and shaded in a way that made them look three dimensional (without any RWBY-like 3D generated art) for a shot that lasted 3-4 seconds.

The main characters provide a nice contrast to each other, though in that aspect there’s nothing new. You’ve got a brainy, edgy, scheming one (Senku Ishigami) and an emotional, strong, passionate one (Taiju Ooki) similar to characters like Naruto and Sasuke, Asta and Yuno, Sora, and Riku. It’s a common trope, but not one I can say hurts anything.

On that note, I do have a few complaints. One is with a pattern in general that I’m getting tired of seeing: the ‘screaming all the time’ character. Now, before you come after me saying that screaming has been a part of anime since the beginning, I know. I get it. But there’s a big difference between yelling out passionately during a fight, to power up, as you unleash a final attack and screaming all the time for even minor things. Perhaps this is nitpicky, but I didn’t much like it with Asta in Black Clover, and I don’t like it here. Taiju yells a lot, to be honest, it gave me a headache after a while. But a more serious problem I had is how much suspension of disbelief is required for this show. If not for the fact that this show tries, very hard, to be focused around science, I could let these things slide as ‘it’s just fantasy.’ But the show works so hard to make the plot realistic that some points and coincidences just hurt. The two main characters are the only ones that have woken up because they happened to be near a cave that has acid dripping from the roof. The main character’s love interest happens to survive because a tree grew around her, and despite her clothing (and everyone else’s) being gone or in tatters, and half the people being washed away by storms and nature, for some reason her headphones are still completely intact on her head. 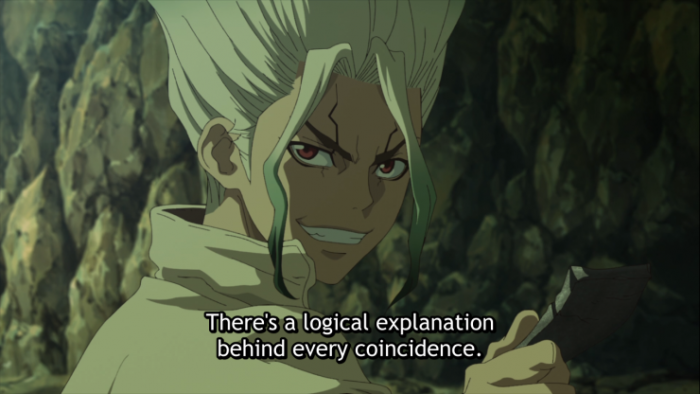 That’s not to mention the plot-relevant problems I have—foremost being, how does this stone thing work? As the world is explored, we see shots of people who have shattered—apparently stone all the way through. A stone arm or head lays on the ground, shattered pieces all around. Okay, so they were stone all the way through, yet when both main characters awaken, it’s like they’re shrugging off a stone shell. Maybe it’s because they stayed conscious? Then they find a way to replicate the acid and pour some on a stone bird. The stone shell falls off, revealing a bird inside. At what point does something become completely stone? Does the acid not only break the outer stone layer but turn the inside back into flesh and blood? How did the main characters stay conscious at all? How did they not go psychologically mad from literally, canonically, thousands of years of isolation and sensory deprivation? If they were stone all the way through, how were their brains even functioning?

To make matters worse, not every creature seems to have been effected- a dog is shown yapping at its owner’s feet, bugs, bats, and some birds (but not others) seem to be still flying around. It’s hard to say whether this has some reasoning or if it’s just whatever is convenient for the plot. I sincerely hope that these concerns are addressed later on, but I fear that there will be no explanation, or the answer will be ‘magic’ take a lot of the charm out of an otherwise fascinating scenario.

That said, I have to say I enjoyed the first episode overall. Though it is with some trepidation, I will certainly be continuing the series. I look forward to seeing what these two high school kids, a genius and a musclehead, could do to rebuild humanity from scratch when they work together. There is a lot of potential for something fantastic, unique, and different, but it could just as quickly go south if the writers take the easy way out at any turn. 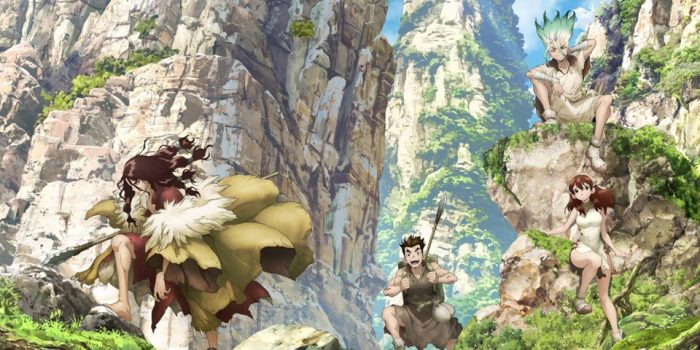 Spiritual Content: A mysterious light from the sky turns everyone to stone- its source is unknown and potentially supernatural. Beyond that, there isn’t much, in its push to be as scientific and realistic as possible, there’s minimal talk of spirits, religion or gods. It affirms that there’s nothing in this world that science can’t explain, eschewing spirituality entirely, although this only one character’s view. He also notes several ‘two million years’ from the stone age to the modern one, and calls himself and Taiju the ‘Adam and Eve of a new world.’

Violence: The aftereffects of everyone turning to stone are shown in a montage. No blood or explicit death is seen, but stone people in car crashes, an airplane exploding with people on board (and a stone head crashing to the ground) and other aftereffects are depicted.  Fragments of stone bodies imply some people have died.

Sexual Content: Clothing has all worn/torn off over the thousands of years, so many stone people are partial to fully nude. Censoring is done by convenient bushes and scraps of clothing, though you’ll still see a couple of stone butts and (undetailed) busts. Nothing explicit is shown, even as Taiju wakes up and walks around nude for a bit before fashioning himself clothing from leaves. Besides this, the amount of sexual material is surprisingly low. Senku tells Taiju not to hug him while naked, and Taiju gets very close to his (stone and bare, though covering herself) crush while confessing his love.

Drug/Alcohol Use: Senku and Taiju create and drink their wine from scratch—something that they note would have been illegal before. They also joke that although it would have counted as underage drinking, they are now thousands of years old, which is questionable at best. However, the primary purpose of the alcohol is for scientific reasons, and drinking it isn’t a focus.

Other Negative Themes: Senku is a little unhinged, tending to be rude to others and just overall mean. He calls people names (idiot, oaf, moron) almost constantly. In the first minute of the show he tries to give Taiju a vial of pure gasoline, telling him that it’s a ‘love potion’ to help him ask his crush out (although he claims he knew Taiju would never drink it).

Positive Content: Taiju’s dedication to his crush is admirable. Both he and his crush display care and mercy even towards animals, going so far as to be late for school to bring a stone bird to a vet in case it was a real sick bird. Taiju and Senku show determination despite setbacks to help save others and restore the world.

Otaku, gamer, children's ministry leader, husband, and bondservant of Jesus Christ. Anime writer at GUG. I love Japanese culture, and I'm (slowly) teaching myself Japanese. Excited to help others see God's goodness and love through the beautiful stories I find in anime!