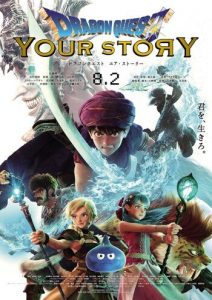 Japanese audiences were treated last fall to an adaptation of one of the most popular JRPG video games of all time with the film Dragon Quest: Your Story. The film received a large amount of negative criticism and floundered at the box office with a measly $13 million gross, but it recently received an international release through Netflix. For fans of the the famed video game series, the movie offers a lot of bizarre and joyful ideas and scenes for them to contemplate. 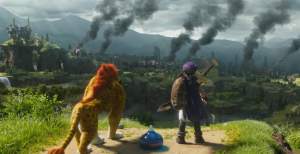 Sometimes a thing is made specifically to appeal to people who are already part of the “in” group. Dragon Quest: Your Story is definitely that. The Dragon Quest games have one of the largest followings of any mainstream JRPG series in Japan, and because of that it was only a matter of time before some sort of movie adaptation was attempted. That said, it’s bizarre that THIS is what we got.

Dragon Quest: Your Story is a loose adaption of the fifth video game in the series which was originally released on the Super Famicom in 1992. That’s a natural pick given that this particular entry is widely considered one of the fan favorite entries in the series in Japan.

It more or less preserves the main beats of the game’s very ambitious story. Like most of the games, it’s set in a vaguely medieval, high fantasy kingdom that’s being lorded over by an all-powerful dark wizard, who is trying to open the door to a dark dimension where his master is trapped. In order to do that, he kidnaps the mother of the playable character who turns out to be the last in a long line of women who know the spell necessary to open the gate. As a result, the hero, his father, and his friends go on a generations long adventure to find a magical sword that can save the day, find true love, and protect those they love.

Dragon Quest games aren’t generally known for their highly original stories. The of the appeal of the Dragon Quest series comes mainly from its aesthetics. The series famously brought on Dragon Ball Z mangaka, Akira Toriyama, to handle the art direction for the series when the first game launched, and his expressive character designs have remained the foundation for the entire series. 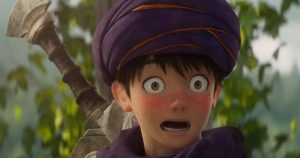 Combine that with the sweeping music and swashbuckling tone of the games and the overall feel is quite engrossing. Having myself only played parts of Dragon Quest 8, I can’t speak to the full breadth or quality of most of the series. I will say though, these games are famously long-winded experiences. Any attempt to boil them down to a reasonable 100 minute narrative is going to involved A LOT of stuff getting left on the cutting room floor.

Here lies problem number one of Dragon Quest: Your Story. The film is EXTREMELY rushed. Despite being a relatively thin narrative, crunching the thirty hour JRPG into such a short runtime makes the plot feel breathless and weightless. You get a few moments in the film where the plot slows down and you get a sense of their personalities and motivations, but it’s not enough. This narrative feels like it could’ve been emotionally crushing if I was experiencing it more gradually over the course of time.

A game can give players dozens of hours of intimate character development which in turn increases personal investment, but a film has to rely on brevity and shorthand to convey complex emotions. Sadly, this means Dragon Quest: Your Story never attains any sort of emotional height for more than a few moments at a time. The plot of this story covers twenty years with two massive time jumps, and covers three generations worth of history surrounding this one family. The ideas are still interesting but they need more room. 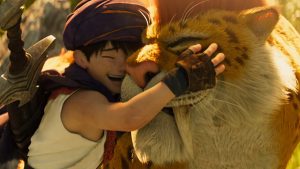 That said, the experience of watching the film was painless. The film is so breathless and colorful that it never gives you room to be bored or disinterested. Even though the plot points are rushed, you still get brief hits of emotion, complete with engaging reveals that kept me invested. Like I said though, the aesthetics of Dragon Quest are the primary appeal that gets people through the door and those are lavishly depicted. Seeing Slimes, monsters, and Akira Toriyama’s famously expressive character designs realized with Pixar levels of detail is absolutely a joy.

That said, the film’s famously insane conclusion throws a lot of what we experience in the film right out the window at the last minute with one of the most poorly conceived TWIST endings I’ve ever seen. I don’t want to fully reveal what it is, but it feels like someone at the writing stage watched The LEGO Movie and thought, “I wanna do that but with Dragon Quest!” The result is an emotional beat that’s insanely pretentious, barely foreshadowed, and doesn’t markedly improve the preceding ninety minutes of film.

I can’t imagine going into this film without ANY investment in the Dragon Quest series. This is not the movie to send to your friends to convince them that the RPG series you’ve loved and adored for years is something they should dedicate themselves to getting into. As it stands, the film’s ending is so OUT THERE that I can’t imagine Dragon Quest fans will appreciate it either. At its best, Dragon Quest: Your Story is a curiosity for fans of the series and little more. That said, what is there that works is lovely. 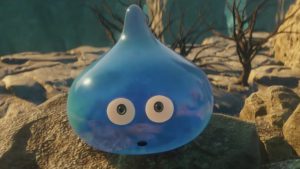