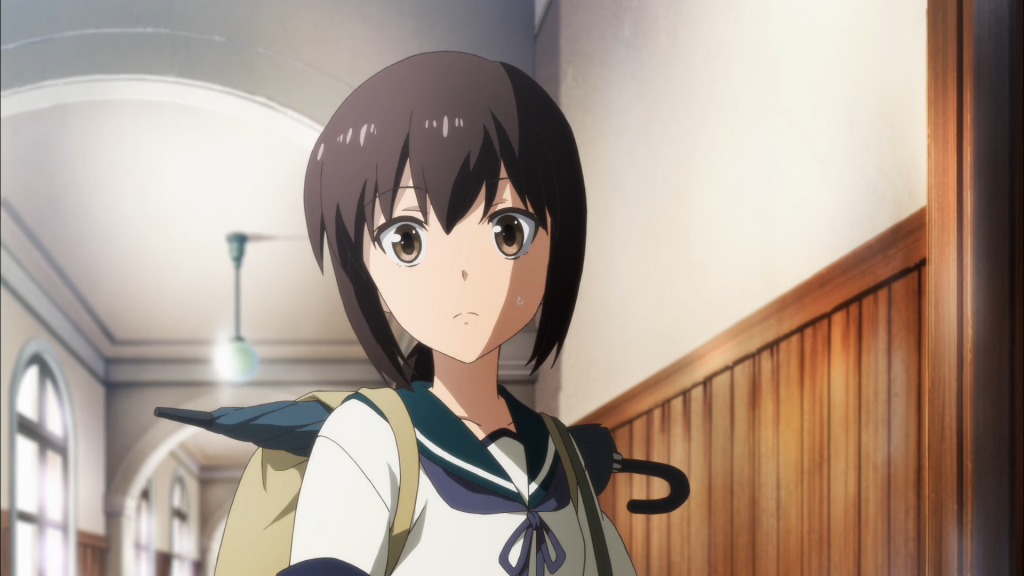 KanColle is a show about girls who possess the souls of old warships. Go back and read that again, because yes, you read it right. These warship girls use their powers to battle the Abyssal, which are some kind of monster-esque sea things that have chased humanity from the seas. Many of them look like giant sea monsters (maybe whales?) that fire cannons from their mouths, although at least one looks very much like a human woman who prefers little in the way of clothing. Our heroines fight on the open seas by equipping themselves with ship parts and armaments, then essentially surfing on the water. You just have to see it. How do they survive getting hit by enemy fire with basically no armor, just regular clothing? Hey, your guess is as good as mine. How do one girl’s arrows turn into warplanes? See my answer to the previous question. It’s crazy, it’s out there, and it certainly has plenty of action for those who want it.

Now that we have the general premise out of the way, let’s take a look under the hood, shall we? In terms of visuals, the show looks great. The characters, weaponry, scenery, enemies, and battles are all well-animated and pleasing to the eyes. Where the show may cause trouble is in its content. Now, to be fair, I went into this with my defenses up, as I had previously read speculation that it would be filled with fanservice. It is truly a mixed bag. At first, the show doesn’t have much to worry about, save for a distant shot of women in a bath, which shows no detail. During the second half of the show, though, we are visited with several panty shots (probably more than what I have included in the content guide, because I didn’t pause during every fall and action scene to see if there was one, I only noted what was obvious to the naked eye… no pun intended). If I had to extend one saving grace to the show, it’s that at least these moments make sense in terms of physics, but then again this is a show about girls arming themselves with battleship weaponry, surfing on the sea, and fighting monsters… so, yeah. In truth, the total number of fanservice moments isn’t all that much when compared to the overall run time of the episode; I have just included a lot of detail in my content guide section so you know what to expect.

The other side of the spectrum with this is that the cast appears to be all female. Now, I may have my guard up mainly because 1) Of the previous opinion I heard and 2) Because it bears a resemblance to Strike Witches in premise, but this leads me to believe that they may go for scenes of implied lesbianism, as well. One scene between two cast members does not lessen my suspicions, either. With all of this said, it certainly sounds like a good case for not watching this show; however, I will reserve my judgment until I have seen at least one more episode. If you are using my reviews as a basis for whether or not to try it, then perhaps wait until next week before even venturing into it. I hope at that point I will be able to make a solid case for or against this show.

The premise of the show is interesting, to say the least, and the visuals are great. Sure, it’s a bit goofy when you really think about it, but as a show it is entertaining. The deal maker or breaker will ultimately be how it handles fanservice from here. Will it be an ever increasing thing, or will the animation move away from that in favor of focusing more on the plot and characters? The former will almost certainly get the show dropped, while the latter may keep me in for the rest of the season.

To be honest, I didn’t really give much thought to this one. I was actually ready to just write off doing a Christian perspective until I knew whether I was sticking with the show, but I can salvage a little something.

Let’s take a look at lying. In this episode, Fubuki gets herself into a bit of trouble thanks to her own lie. When asked about how many battles she was in, she tries to answer, only to be misunderstood by her friends. Now, granted, she does try to clear up the situation to no avail, so perhaps it isn’t fair to accuse her of lying. Still, instead of trying to resolve the matter, she ultimately decides to launch with her fleet, only then revealing that she has never fought before—when she can no longer hide it.

The problem with lying is that a lie tends to grow. There may be times where a lie is a one-off situation; there are also times where one lie begets another lie in order to maintain the previous lie, and so on. It has been my experience (as a repentant habitual liar) that eventually a lie will come back on you. It may not be until years later, when someone brings it up again and you’ve completely forgotten about the lie you made up, but it will. On top of that, the Bible has a pretty harsh sentence for liars: “But the cowardly, the unbelieving, the vile, the murderers, the sexually immoral, those who practice magic arts, the idolaters and all liars–they will be consigned to the fiery lake of burning sulfur. This is the second death.” (Revelation 21:8).

The long in the short of this is: lying is bad, don’t do it.

Nudity/Sex/Fanservice: One Abyssal woman is shown wearing what might as well be a bikini; three girls are shown in a bath, but it is from a distance and you don’t see any details; two women are shown wearing shirts that reveal their midriff; a girl is shown running in a short skirt, with two straps sticking out above the skirt (can’t say for sure what they’re supposed to be, but you can probably speculate); another bath scene is shown, this time closer up, which shows the equivalent of cleavage on at least three women; another female Abyssal is shown, wearing very little clothing—her top covers the center of her breasts, but not the entirety; one scene during Fubuki’s arming sequence shows her skirt being blown up from behind, revealing her underwear; there is another brief underwear shot during Kaga’s arming sequence; another quick underwear shot as Fubuki falls in the water; there is a very brief underwear flash during a battle; one girl is hit with a shot and her clothes are tattered in the aftermath—you can see a small portion of the side of her breast, while a later shot shows her from a different angle, showing a portion of the front of her breast (there is something on her chest in this shot, although whether it’s supposed to be dirt or a crude drawing of a nipple is beyond me)

Violence: War planes and Abyssals fight—explosions, a giant shark thing dies, and the like; plenty of firepower and explosions between the girls and the Abyssals

Other: Two girls are shown to be very close, but whether this is meant to be a friendship or something more isn’t clear