Review: KanColle, Episode 5: Don’t Compare Me to the Girls in Carrier Group 5! 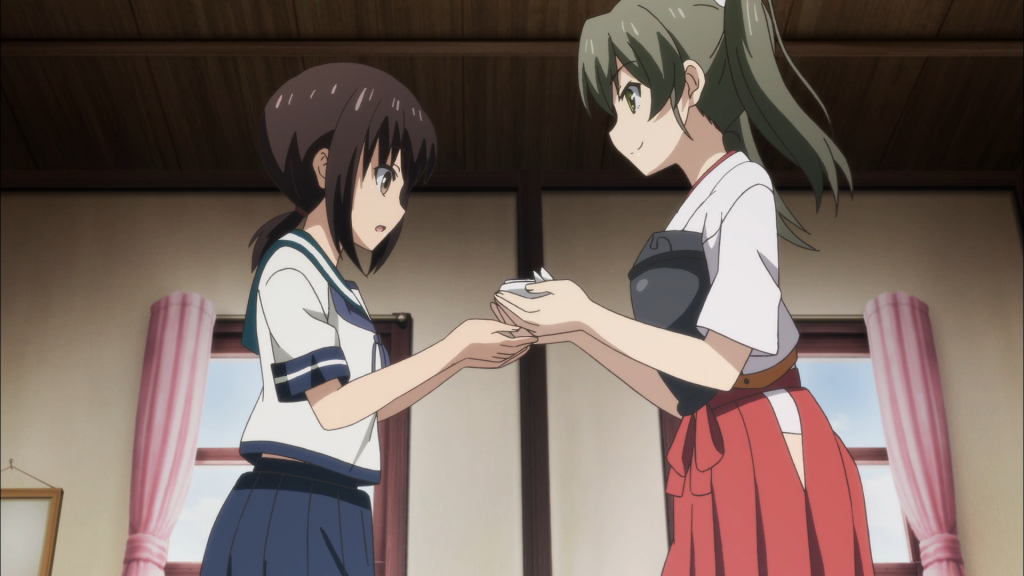 Fubuki just can’t catch a break. Launched into a battle before she was truly capable of fighting, going through some intense training, losing a team mate, and almost losing her own life is a summary of her experiences in the first four episodes of the show. Now she is being split up from the girls (ships) that she has come to know and being reassigned to a new fleet. While not all of the girls are “new” (at the very least, we know Kongou from the previous episode, and both Ooicchi and Kitakami have shown up previously), this is the first time some of them get any serious screen time.

For the most part, the episode focuses on the tension that is going on within the new fleet. Ooicchi is only concerned with being glued to Kitakami, and Kaga and Zuikaku can’t stand each other. Amidst all of this, poor Fubuki can’t even find a room to stay in, and another issue ends up being raised: Who will be the flagship for their new fleet? This leads to a series of bath scenes that follow the failed attempts of several of the girls to prove their worthiness as a flagship. Thankfully, these scenes are not particularly graphic (see the content guide for more detail), but their inclusion could be bothersome for some viewers.

In the end, the fleet is forced to go into battle before having the chance to select a flagship; however, in the midst of the battle, one girl naturally rises to the challenge and leads the rest of the squad to victory. As a result, she is elected as the group’s flagship despite the seemingly absurdness of her current class, and what starts as a seemingly hopeless fleet is seen as having some positive prospects, as we see Fubuki bringing Kaga and Zuikaku together, albeit a bit reluctantly.

Acts 8:1 – On that day a great persecution broke out against the church in Jerusalem, and all except the apostles were scattered throughout Judea and Samaria.

In this episode, the girls are split up from the fleets that they’ve come to know and love. They have undoubtedly gotten comfortable working with the same girls and would probably prefer to stay with those they are comfortable with; however, that is not what is necessarily best for the mission at hand (the destruction of the Abyssals), so they are split up into new fleets and must learn to grow outside of their comfort zones. The disciples’ experience was probably similar: Jesus had returned to them, and they expected Him to set up His kingdom right then and there, only to have Him taken from them again. Then, later, they are dispersed from Jerusalem, where they were presumably quite comfortable. In both cases, we see people who are being forced to grow and move into changing circumstances for the purpose of serving a greater good.

Nudity/Sex/Fanservice: Short skirt, midriff shirt on the usual character(s); Kongou is shown in the bath (you only see a brief shot of what amounts to cleavage) along with the other girls from her fleet—some of whom you can also see what amounts to cleavage 15:39 – 15:51; various brief Zuikaku panty shots from about 15:55 – 15:59; bath scene, similar to the previous, 16:07 – 16:26; bath scene 16:30 – 16:38 (no real exposure below the shoulders this time); 16:48 – 17:22 another bath scene, similar to the first, but during one section one of the girl’s breasts is more exposed (you see a brief side shot, at least); a female Abyssal is shown in a midriff-revealing top

Other: Fubuki has a fantasy about Akagi patting her head and telling her she did a good job; Ooicchi and Kitakami are shown to have been assigned to the same room, with Oicchi acting romantically towards Kitakami (who otherwise seems apathetic)–this is the relationship that I usually refer to, as it seems the writers intend for there to be a romance between the two girls (although whether there really is or whether Ooicchi just fawns over Kitakami–making it one-sided–really isn’t clear); Ooicchi insults another girl by calling her “Flight-Deck Chest”