Review: Your Lie In April, Episode 10: The Scenery I Shared With You 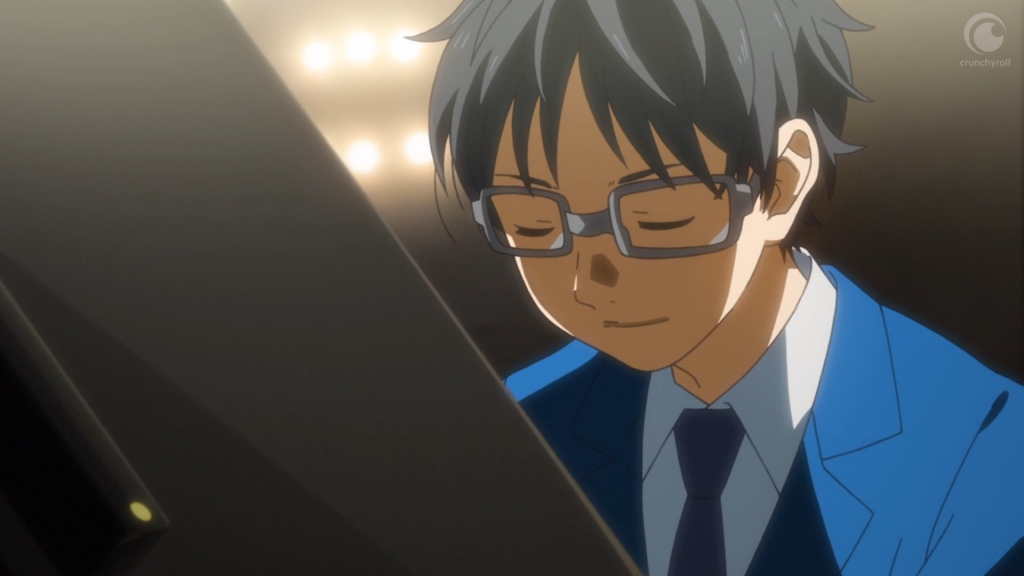 To be honest, this is a review that I really don’t know how to write. Pretty much the entire episode is taken up by Kousei playing the piano while we listen to introspection from Kousei himself, along with that of some of the other characters. It’s the kind of an episode that, by itself, probably wouldn’t be all that interesting, but as a culmination of all the events leading up to, it actually manages to hold the viewer’s attention. At first, Kousei continues to struggle, and his thoughts ultimately lead him down the destructive road of forfeiture. It’s certainly something we can all probably relate to: a challenge that just seems so much bigger than us and causes us throw in the towel. Thankfully, Kousei doesn’t stop there. It is in this struggle, though, that he finally finds freedom. Whether this means that he had to get to the point he reaches in order to fully abandon the pianist he used to be, or whether it means something else, I’m not sure. I’m suspecting that the meaning of this episode is deeper than I’m capable of understanding.

One thing that I can say is that Kousei’s determination is admirable. Personally, I would probably have just quit. Once my hands hit my side, I probably would have gotten up, walked off the stage, and called it quits. Kousei is clearly more inspirational than I am. To go a bit deeper, though, it seems that he only finds the strength to continue (and, ultimately, grow) when he abandons whatever previous reasons he had for playing and begins to focus on his one true reason. It is at this point that his playing transforms and becomes something new. This kind of parallels the Christian life: at first we go about making a mess of our lives until we finally surrender and start living for the One who matters.

The oddest thing about this episode is the fact that Emi, at the very least, is able to see what Kousei is imagining while he plays. I don’t know if this is supposed to be literal, or if the idea is that Kousei is able to communicate his emotions and whatnot by the way he’s playing. It doesn’t really hurt anything, but it does sort of jar the realism of the show, unless there’s something about music I’m just not getting. All in all, if you’ve watched up until this point, then you will not want to miss this episode.

Okay, so I threw a mini one into the review this week. What I want to touch on here is something Watari says at the beginning of the episode:

“In the face of adversity, that’s when you know if someone’s the real deal or not”

This one sentence is applicable to many things, and the Christian life is certainly one of them. Let’s face it: this is not an easy life. It was never promised to be, and if you think it’s easy then there will inevitably come a time when that image is shattered. Jesus promised that if they persecuted Him, then they would persecute us (John 15:20), so we should not be surprised when that happens. Depending on where you live in the world, you may be more familiar with persecution than some. The point, though, isn’t how much persecution we face, or how harsh it is, but how we react to it. If our faith is real and strong, then it should endure. We should come out on the other side still believing, still professing Christ, and still loving Him. I don’t want to say that someone who fumbles was never the real deal, simply because I don’t know if that’s a universally true statement. Is the issue really that black and white? I don’t know. The only thing I can say for sure is that, when adversity comes, the person who sticks with Christ no matter what the cost is, in fact, the “real deal.”

Blood/Gore: Young Kousei is shown with blood running down his face