Review: Your Lie In April, Episode 11: Light of Life 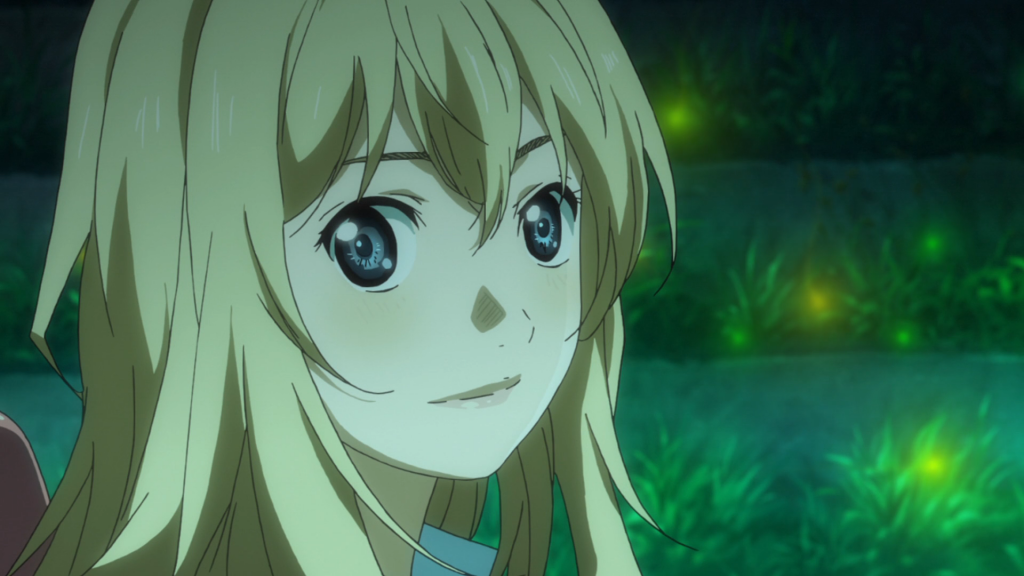 In the aftermath of his confusing performance, Kousei is faced with a number of reactions, the greatest of which comes from newly-introduced character, Hiroko Seto. It appears that Hiroko may be the very reason Kousei’s mom ever started him on the piano, and, though it’s not stated in the show, it would suggest that she is ultimately the reason why Kousei went through everything that he did. The other major reaction (beyond that of Kousei himself) comes from Takeshi, whose internal feelings towards Kousei are given a short examination. This is, undoubtedly, a transitional episode, as suggested by Kousei’s response to Takeshi as well as Kousei’s acquiring of a new piano teacher. Add on Kaori’s cryptic comment at the end of the episode and it’s safe to say that everything is just beginning.

The episode does a fairly decent job of wrapping up the current storyline while setting up the next. The conclusion of Kousei’s first competition in two years feels neither rushed nor drawn out, and the reactions from all of the characters seem to fit. Takeshi feels betrayed by his hero (quite literally, if we consider his internal monologues), and Kousei exhibits the typical emotional rollercoaster that seems to be so common for someone at that age. One minute he seems to wear a cool facade that says he’s okay with the results, the next minute he’s running and screaming next to a train. In the previous episode he seemed to be internally confessing his feelings for Kaori (and externally through the music), while in this episode he is brushing those feelings off as mere gratitude.

Hiroko’s introduction also works out quite well. It probably helps that she was very briefly introduced (though not by name) in the previous episode, so that her introduction serves as more of an explanation than a new character coming out of the blue. Regardless, she does not feel shoehorned into the story. What kind of impact she will have on Kousei remains to be seen, but it’s probably safe to assume that she will not be like Kousei’s mother when it comes to being Kousei’s piano teacher. We still don’t know enough about her character, but she certainly feels like a good fit for this quirky cast we’ve been given.

Fans of Your Lie In April will not be disappointed by this installment. New resolve, new challenges, and new opportunities have come along to carry Kousei into the next arc of his journey, and if all that is not enough, just wait until the end of the episode!

We could stand to learn a thing or two from Takeshi’s view of Kousei—both as Christians and as human beings in general. While we already know that Takeshi held a high opinion of Kousei, this episode takes it even further, suggesting that Takeshi saw Kousei as some sort of hero. We also see that Takeshi feels as if Kousei has fallen, which does not sit well with him because heroes aren’t supposed to lose. This seems to leave Takeshi confused and angry because, ultimately, his hero did not live up to his expectations. We can all probably sympathize with Takeshi on some level because we’ve all probably done this at least once in our lives: we’ve found someone we look up to, who we wish to emulate. We feel as if this person can do no wrong, until they do. Then our whole image of them falls apart, and perhaps our own lives, too, depending on how much stock we placed in that person. The Bible has something to say about this:

Do not put your trust in princes, in human beings, who cannot save. – Psalm 146:3

No matter what, our human heroes will fail us. Perhaps we will put too much on them in the way of personal expectations, which they could never live up to, or perhaps they will fail because they, too, are fallen human beings, tempted in their flesh like any other human. Regardless, the point stands: human heroes will fail us. Thankfully, we have One on whom we can put our trust—a true Hero Who will never fail. That Hero is, of course, Jesus. We can look to Him and see the pattern we are supposed to follow. We can come to Him with our problems and have faith that, if we belong to Him, He will hear us and help us. We know that there is nothing that can stand against Him or bring Him down. He is truly the only hero who will never fail us, yet so many of us seem to have such a hard time trusting in Him like we do our human heroes.

Nudity/Sex/Fanservice: Kousei is shown curled up in the bath tub

Violence: A scene in the beginning shows a super hero scene