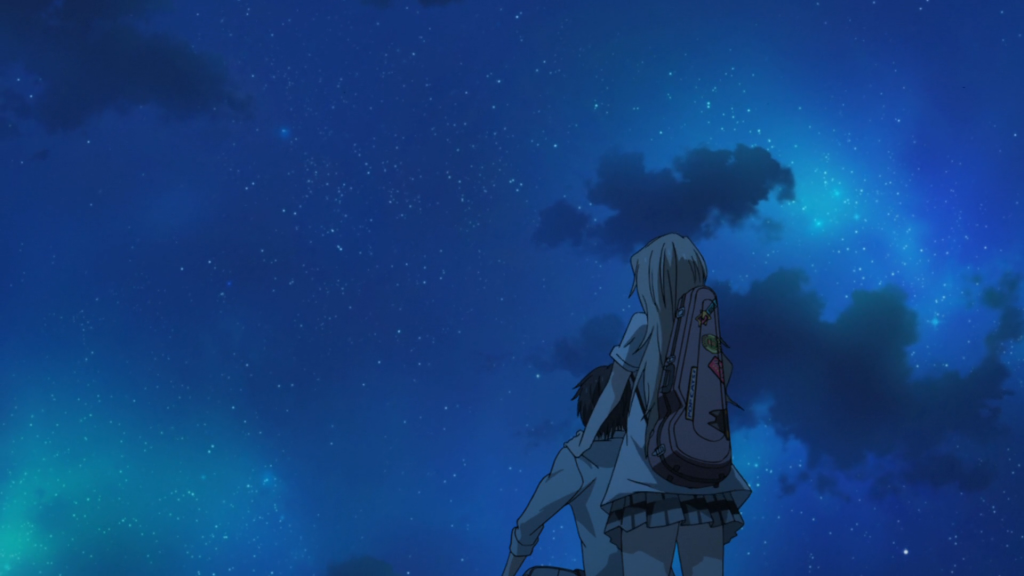 With the ordeal of the his first competition in a long time behind him, Kousei now has a new goal to work towards: playing the gala with Kaori. Surprisingly, this does not set off another preparation arc; in fact, by the end of the episode, both the gala and the stage time has arrived. This is by far a good thing, because there is only so much story you can get out of two characters practicing and preparing for something before it gets old. Thankfully, this episode doesn’t even hinge on that for plot, either. Instead, we get a good bit of humor interlaced, especially when Kousei meets Kaori’s parents and finds out that they are fans of his.

I was particularly happy to see that Emi made a return in this episode. She may not play a very big role (she doesn’t really play much of a role at all), but it’s nice to see that she wasn’t just in the show for one arc and then completely forgotten about. Part of me wants to see her end up with Kousei. It probably won’t happen, but it would make me happy if it did.

Despite all of the light-hearted fun in this episode (seriously, watching Seto’s daughter mimic Kousei as he flips out is some amusing stuff), it doesn’t stay that way. A mysterious occurrence near the end of the episode leaves the characters and viewers alike confused, and to make matters worse it is not resolved by the end of the episode. While nothing is confirmed, we can certainly speculate, especially based on clues from previous episodes. Until the next episode, that’s sadly all we have.

In the end, this isn’t a particularly spectacular episode—nothing in general stands out  other than the end (though, as I finalize this review, I find myself remembering scenes I had forgotten, but I see nowhere to include them in the review), and yet Your Lie In April feels like one of those shows where even its “just okay” episodes are still better than some other shows out there.

2 Timothy 1:7 – For the Spirit God gave us does not make us timid, but gives us power, love and self-discipline. (NIV)

Near the end of the episode, Kousei is faced with a dilemma: He needs to have his performance with Kaori pushed back. The only solution is to see if the final player, who is some kind of contest winner (please pardon my vague recollection of what he was exactly), would switch spots with them. Not only does the kid refuse to do so, he but he also goes on to insult Kaori and say all sorts of disparaging things against her. We see Seto eventually start to lose her cool; however, Kousei, who is considerably closer to Kaori than Seto, manages to keep his cool, although he does make a comment about how the spotlight belongs to him and Kaori. While he’s a bit prideful, he certainly keeps his head on straight in a situation that I feel the world would say justifies a little yelling, screaming, and profanity.

As Christians, we will inevitably face situations where we will have to make a similar decision. It is no secret that the world tends to not like what we stand for, especially in certain situations (can anyone say homosexuality and abortion?). While some people may give us grief for simply being Christians, others may tolerate us until we have the audacity to talk about our beliefs and values. Then the guns are likely to be brought out as the world throws whatever names they can at us. This is where we are put to the test. Do we handle the situation with level-headed self-discipline, proving that the One in us is greater than the one in the world, or do we give into the fleshly temptation to fire back with whatever hurtful words we can think of? I’ll give you a hint: the first option is the right choice.

Blood/Gore: Kousei is shown with blood running from his mouth; flashbacks show young Kousei with blood on his head