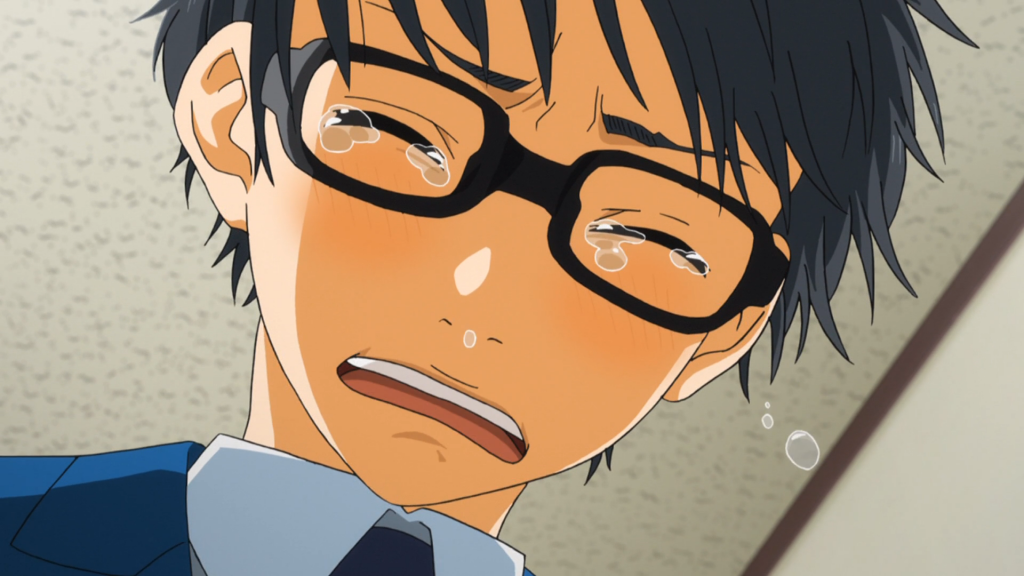 As the saying goes, there are three sides to every store: his side, her side, and the truth. With this episode of Your Lie In April, we get to see the truth behind Kousei’s mom’s actions, whereas up until this point we have only seen Kousei’s point of view. Granted, the situation is still dark and deplorable, regardless of her reasoning, but it helps to know that there is more to the story than a mother who was simply abusive; and I’m sure we can all relate to having the right intentions but the wrong implementation.

Much like the other episodes where the real-time events involved piano playing, this episode spends its time between the real-time events and flashbacks, focusing on the emotional states of its characters. Kousei’s transformation from the kid who plays by the rules and follows the score to a “T,” to a character who allows his emotions to flow into his playing, continues in this episode as he stuns the audience by taking the stage at a violin gala despite missing his violinist.

Throughout the episode, we see Kousei’s internal struggle—and ultimate reconciliation—with his mother. We also get to see inside some of the other character’s hearts and minds as well–Seto in particular. It certainly keeps the episode more interesting (not to mention deeper) to see how these events have affected the people around Kousei, and to see the reactions from other characters to Kousei’s changes. Your Lie In April continues to be an intriguing show, as it’s pacing remains slow while its character development powers on. In other words, not a lot happens as far as the progression of time goes, yet within this time the characters sometimes grow considerably, as evidenced by Kousei ultimately finding peace with his greatest inner demon. It really is a well-done show, and well worth your time, even if you don’t typically like this genre of anime.

Oh, and we find out what’s up with Kaori at the end. So there’s that, too.

After making his peace with his mother and finishing his set, Kousei makes a comment to Seto about his mom being a part of him or being within him. While I don’t have a direct quote, you will certainly recognize it when you see it (or if you’ve watched the episode, you should know to what I’m referring). My point in bringing this up is that it reminded me of how we are to be with Christ. Interestingly, I couldn’t find a verse that stated exactly what I was trying to say, but this reminded me of the idea that Christ dwells within us. The closest verses I could find stated that the “love of Christ” may dwell within us, and of course there is that great verse that tells us “greater is He that is in you than he that is in the world.” The point is, though, that Kousei’s proclamation that his mother is within him drew parallels in my mind to the idea that Christ dwells within us. The difference, of course, is that the souls of our departed loved ones don’t actually live in us outside of memories and influences. Christ, on the other hand, is actually with us.