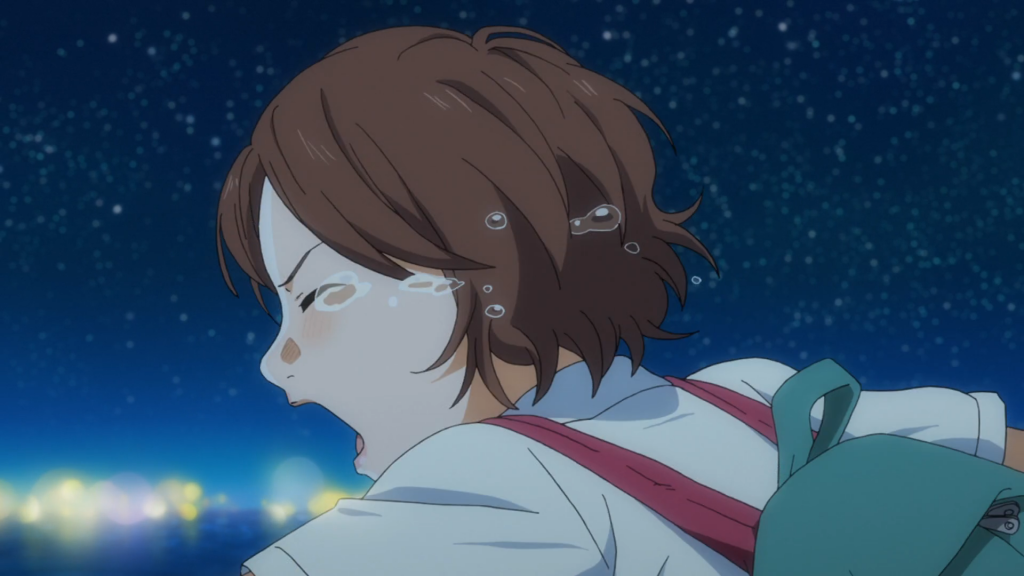 This episode picks up right where the previous episode left off–with Kaori in the hospital and his three childhood friends finding out. Despite what you may think, though, this doesn’t really constitute the focus of this episode. There is certainly some time spent on the subject of Kousei’s feelings about Kaori being in the hospital; his reflections on his mother’s illness, as well as questions that he can’t bring himself to ask Kaori, are certainly brought up in this episode and will probably play a role later on down the road. The spotlight in this episode really belongs to—or is at least shared with—Tsubaki.

As we have already been made privy to, Tsubaki is in love with Kousei, but is in denial of that fact. We see this explored more deeply in this episode, but the nice thing is that we get to see it from Tsubaki’s perspective. Instead of the story focusing solely on Kousei and just letting us find out about these details from Kousei’s perspective, we actually get to see the story behind all of it. Undoubtedly this not only helps to stretch out the plot (along with increasing the tension of the Kaori situation), but it also adds another level of realism to the story. The fact of the matter is that the world doesn’t get put on hold while people deal with their problems.

With all of that said, things don’t exactly seem to be moving in an overtly positive direction for our characters. While it’s true that Kousei actually comes to an important decision in this episode, the situation with Kaori is still very much real. Then there is the fact that Tsubaki is still wrestling with her own emotions, and Kousei’s decision ultimately makes that situation even worse. So, in a nutshell, things are bound to get worse before they get better. Thankfully, the writers make you want to care about these characters, which makes you want to stick around to see what happens.

While the verse above is clearly about salvation, I want to look at it more from a general standpoint of “don’t put off tomorrow what can be done today.” It is certainly a concept that can be garnered from this Scripture, I think. The application in this episode is that Tsubaki has known Kousei all of her life and has suppressed her feelings for a long time. Now that she is being forced to confront those feelings—and maybe even begin to admit them—she has to face the possibility of not being able to do anything about them. What she has always assumed would be there now risks the possibility of no longer being there in the future.

We can do the same thing with salvation. We can put it off, telling ourselves that there will always be more time to think about it or consider it, but, as the Scripture says, “now is the day of salvation.” It’s easy to say we’ll do something tomorrow, but at the end of the day we are not guaranteed to be here tomorrow, so we would be wise to not put off anything–salvation most of all.