Review: Made in Abyss – Season 1 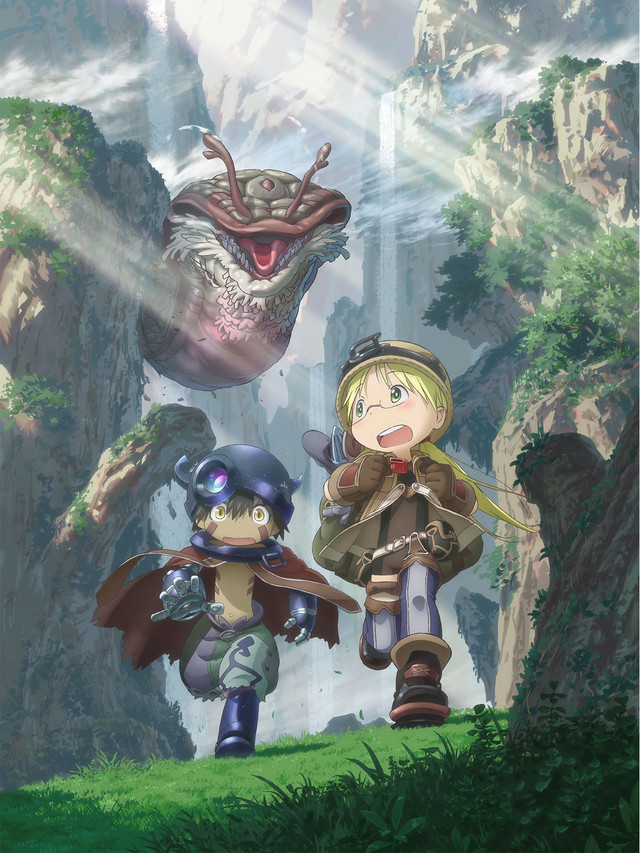 “The plot and characters might take only a couple steps forward, but the establishment of this series as a foreboding, yet ultimately optimistic fantasy-scape, akin to many JRPG’s prior to the turn of the millennium, is intense and immediate.”

Read that again. “Ultimately optimistic fantasy-scape.” I wrote that about Made in Abyss in my detailed review of the first episode. That was back when I thought the series would be rated “PG.” If you look at the metric above, you’ll notice I labelled the first season as “Rating: TV-MA.”

Yeah, let’s talk about that. 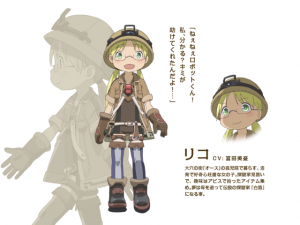 Spiritual Content: “God has been replaced by the Abyss itself.” This is a phrase used more than once in the first season of Made in Abyss. In earlier episodes, we find skeletons of people who died in prayer. A “curse” of the Abyss exists, though the exact nature of this phenomenon, while not completely understood, does not seem to be spiritual in nature. If anything, it’s most likely scientific.

Violence: There is a substantial amount of blood. However, most blood is not a result of violence, per se, but instead, poor navigation of the Abyss, which leads to accidents. A strange creature poisons one of the characters, causing them to grow pale and disgustingly bloated. Several animals are killed through crushing or incineration. We watch a couple animals get dissected for food, though they’re dead. Some characters get partially digested. 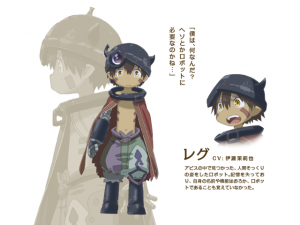 Sexual Content: This one requires some explaining. There’s quite a bit of sexual content, but only some of it is the usual fanfare you’d expect from a mature anime. There are a couple references to male genitalia, made both seriously and in humor. One character blushes multiple times from witnessing female nudity out of sight of the camera. Multiple characters threaten to “tie-up naked” other, younger characters… which we see in a quick cut. One character is given medicine anally, which is partially performed on camera.

But Made in Abyss handles sexuality differently in two distinct ways. First of all, one character becomes nude several times, and only once for an actually understandable reason. But that same character has no qualms with her nudity because her traveling companion is a robot and thus has no perception of sexuality in any capacity. At least, that’s what she believes. We as viewers are given enough details to know this is not the truth, and so she is unintentionally subjecting a boy her age (who has demonstrated affections for her) to embarrassing and scandalous situations with no mindfulness about how it might affect him.

Last, and most importantly, is the “tie-up naked” bit. This is only a symptom of a much more concerning problem demonstrated in the series. While never overt, there were multiple times I’d find my eyes narrowing at a possible subtext: that the author might have pedophiliac interests. Like I said, these instances are not incredibly common, but more than once a younger character (usually female) will be subjected to random, often vague sexual conduct with no broader purpose than to simply exist in the story. 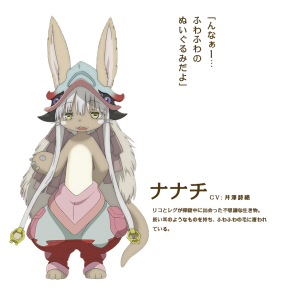 Most notably: child-slaves undergoing bodily mutilation (on-screen) and one character bleeding from literally every orifice in their body, screaming and wailing while their friend tries and fails to cut off their limbs (also on-screen). There’s also an instance of morbidly executed euthanasia. Adults frequently have no qualms about violently harming kids.

Positive Content: An incredible spirit of adventure permeates the plot. People demonstrate being there for each other in times when life becomes very, very scary and difficult. Loyalty to companions is portrayed in a mature and believable way. There is also a prevailing theme of overcoming supreme adversity with creative thinking and the sheer audacity of the human spirit.

When I finished the anime (and then the manga), I made this comment to one of my friends about Made in Abyss: “It becomes so dark. Like, impressively, concerningly dark. Brilliant in execution, but so, so morbid, both physically and psychologically. It’s like if you took Hunter x Hunter, combined it with Happy Tree Friends and My Neighbor Totoro, and bathed the product in ten different layers of eldritch, Lovecraftian horror.”

And I stand by that assessment, because Made in Abyss is all of those things.

I’ll be forward with you, this series is not for the faint of heart. It might be executed impressively, but if you’re not ready for some stomach-turning torture and possibly pedophiliac voyeurism, then stay away. 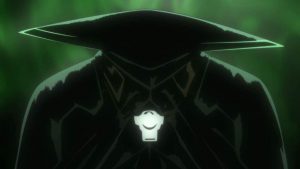 A White Whistle, one of the strongest beings within the Abyss

Now, as I said in my first episode review, the series does not start this way. The first few episodes, while possessing seeds of ominous foreshadowing, are not as gruesome or questionable as what I’ve been describing. As the characters descend the titular Abyss, so do we descend into a cruel, godless realm of horrifying creatures, macabre disasters, and psychopathic characters. If the first chapter feels like a Studio Ghibli production, the later episodes feel like Elfen Lied and Akira. There’s one character who is basically Fullmetal Alchemist’s Shou Tucker, except several times more terrifying. He is one of the most memorable villains in recent memory, in the worst way.

But let’s back up a second and look at this series from a more critical angle. Director Kojima does a stellar job with the pacing and content-control of each episode. There’s a steady flow of new developments and progress for our protagonists without ever burdening us with more information than we can handle. In terms of writing, Made in Abyss presents a cleanly-rendered and materialized world, with an obvious sense of direction and believable character motivations. On a more point-for-point scale, the means its characters use to get from one destination to another never repeat, resulting in each encounter feeling new and intuitive. 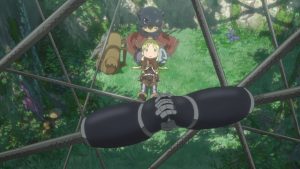 Those are his arms

The voice acting is one of the most impressive parts of the entire series, with some truly stunning performances in the later episodes. The two main heroes are especially convincing.

The tone, while perhaps not to everybody’s taste, is handled with proficient attention. The sense of adventure mingled with growing degrees of doom is on a nice curve, easily gauged, and with a trajectory that can be predicted ahead of time, much to the viewer’s anticipation. When times are good, they are quaint and sweet. When times are bad, they are harrowing and miserable.

The animation will occasionally suffer, but not so much as many of its contemporaries. The “lows” of Made in Abyss are consistently higher than the average animation quality of other series being released right now. That said, there is a deceptive amount of time and attention given to the first episode, which is feature-film levels of production quality, never matched again throughout the course of the season. Still, I never felt like I was watching something lazily cropped together. No typical background or SFX effects are ever used, and that’s to the benefit of the anime. Made in Abyss, if measured by no other accomplishment, should be lauded for its ability to find its own identity outside the rules of those that came before it. 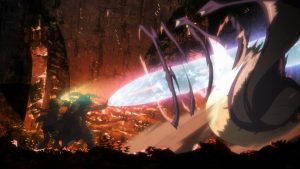 While I won’t be pulling up the soundtrack in my free time, I do commend it for matching its subject matter beat-for-beat. There’s a few memorable songs, but nothing too grandiose. Perhaps I’m just spoiled by My Hero Academia and Haikyuu!!. The worst musical element of the entire series is the opening sequence, which boasts great animation, paired with a generic, soft J-pop track.

But most importantly—and I can say this having read the whole manga—this is a strong adaptation. There are scarce few deviations from the source material, and the points that do briefly change course are for the sake of exploring a neat idea or further developing a specific character interaction. Nothing feels wasted, and it’s evident Kinema Citrus wants to do justice to the source material. This is something many other studios could learn from. If I had one complaint, it’s that the manga is more front-heavy in its world building, which is neglected in the anime. This, however, is probably to the benefit of the medium.

Made in Abyss has a lot to say. It takes hard material and pushes us into the thick of it, giving us vibrant characters who tackle an insurmountable challenge, which at times actually gives evidence of how insurmountable it is. The structure of the Abyss and the city above are fully realized in stunning detail, painted and conceived to perfection. Nearly everything about this series is lovable and worthy of accolade, especially if you enjoy a strongly delivered tragedy as much as I do. There are some obvious content concerns, so I cannot say it’s for everyone, but to those who are up for a story you’ve likely never seen before, give Made in Abyss a crack.

When you’re done, catch up on the manga. If you can believe it, these trials that the characters endure in the first season are only the beginning. We have only glimpsed the edge of the titanic nightmares that dwell in the fifth layer of the Abyss. I cannot wait for the already green-lit Season 2 to drop.

Made in Abyss is a deceptively dark adventure-fantasy with a wonderful world, a strong cast, and intense psychological performances. Excellent in most regards, it suffers from a couple noteworthy content concerns, making it hard to suggest to some audiences.