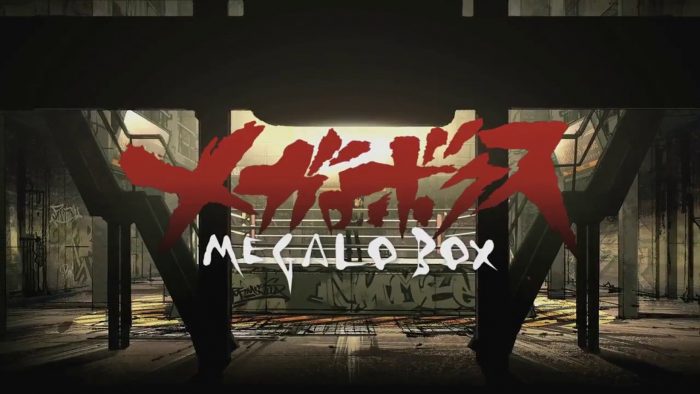 Since I am a fan of action-oriented shows such as My Hero Academia, Cowboy Bebop, Rurouni Kenshin, and the Fate series, I knew Megalo Box was right down my alley.

Megalo Box is an anime which is apparently a spiritual successor to a manga/anime called Ashita no Joe (Champion Joe). It is set in a dystopian future where a new style of boxing called Megalo Boxing has become all the rage. Boxers use what is referred to as “gear technology” that attaches to their arms, and takes the sport of boxing to a whole new level. As if the sport wasn’t already hard-hitting enough, right? 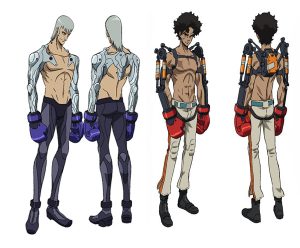 The style and art takes me back to the days of shows like Cowboy Bebop and Samurai Champloo. It’s got a sense of grit to it, but has a swagger that not many anime properties tend to have. The art direction is very versatile in changing the tone based on location. The slums and outskirts of the city look grungy, and are accompanied by various shades of brown, whereas the city is represented as much cleaner, with brighter colors. The underground settings are much darker and do well to capture the brutal personality of the Megalo Box world. 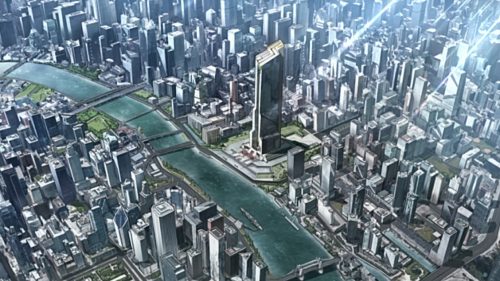 Megalo Box tells the story of Junk Dog (JD for short)—an underground fighter from the outskirts, who holds no real name. When we first meet our protagonist, we find him in a state of limbo. He is forced throw fights to earn money for his manager, using faulty gear. He struggles with whether he should let things be, or finally stop throwing fights. On multiple occasions we see him recklessly riding his motorcycle off jumps and into closed streets, seemingly not caring whether he lives or dies. We get to see his internal struggle, something I find unique compared to the usually overconfident hero we find with many action anime. 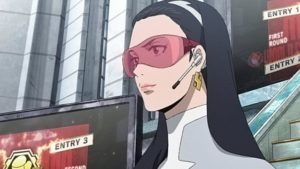 Like a typical story usually starts, things begin to change on the day that J.D. wants to stand up for himself. The mega corporation known as Shirato Group announces an official Megalo Boxing tournament. Later that day, J.D. almost literally runs into Yukito Shirato, the CEO of Shirato Group, and is introduced to Yuri, her bodyguard/champion. Without giving too much away, the first time these two meet is obviously the beginning of a rivalry—one that is likely akin to Rocky Balboa and Ivan Drago from Rocky IV. I cannot wait to see how far it will escalate.

The last few minutes of this episode leaves us with a huge cliffhanger and wanting more, in such a way that I am eagerly looking forward to episode two. As much as I would like to say it was a jerk move, it was clever of the director. Many shows tend to use cliffhangers to leave their audience with nothing but questions, but the end of this episode should have left the audience craving after more action. Thankfully, we only have to wait a week to see what will happen next. 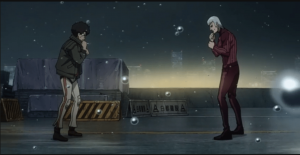 The director clearly wants to save what we all came to see for the rest of the season. Episode 1 does well to set the tone and stage for what is to come. Viewers had to see what was at stake for J.D. and the supporting characters, and how much the world revolves around the sport. The next episode will indeed drive the story forward, and I think anyone who watched is looking forward to what will come.

However, we do get a taste of the action. The biggest draw to boxing is how close range the fights take place. Based on what we have seen so far, it seems that the camera is going to stay in close and let us experience every punch, dodge, block, and counter of each fight. Personally, as a fan of the sport itself, I am happy to see that it is not forgotten. Megalo Box shows appreciation of the sport thanks to its source material, and takes it up a notch. 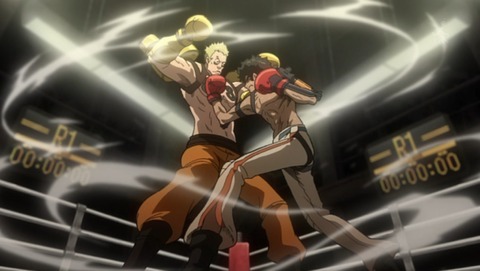 Violence: Megalo Box is centered around boxing, so expect lots of it. In this episode we see a few instances of characters getting hit so hard that blood comes from their mouths. As the episode progresses we see J.D. get more battered and bruised as a result of the fight. This is the kind of content we will likely see throughout the season.

Language/Crude Humor: This first episode consists of three swear words, which are sh**, b***sh**, and b**ch. After this first episode it seems pretty obvious the writers are not going to pull any punches on the language category.

Drug/Alcohol Use: A character is seen drinking alone in a bar during one scene. No drug use is present at this time, but that does not rule out the possibility of it to come up in future episodes. Any underground activity in the episode takes place at a bar called The Drunken Monk.

Sexual Content: The only sexual content present in this episode is when a character opens his mouth to reveal an image on his mouth piece. This image depicts a woman in lingerie laying over the words “Bury Me.” Whether any major sexual content should appear in future episodes is unknown.

Other Negative Themes: One of the scenes involves an underground dog race where a man is yelling angrily as the dog he bet his money on is losing the race. This episode consistently refers to gambling, placing bets, and fights being thrown to make more money from the activity.

Positive Content: In this first episode, we can see J.D.’s discontent with his current situation. Clearly he wants to become greater at what he does than simply throw fights for a living. We don’t know his exact motives yet, just that he’s sick and tired of being sick and tired. I look at this and compare it to our lives as believers. We know we serve a bigger purpose than our current situation whether it may be good or bad. Unfortunately, there are people out there who allow themselves to be shaped by their current lifestyles and situations. Whatever it is, J.D. knows there is something more beyond his current status.