Junk Dog is an underground fighter of Megalo Box, an evolution of the sport of boxing that utilizes mechanical limbs titled “Gear” to enhance a person’s speed and power. Junk Dog has the potential to be a great boxer, but the illegal nature of his participation in these fights means he makes a living off throwing matches. The scenario changes when Joe runs across the Megalo Box Champion, Yuri. The encounter ignites a passion for Junk Dog to enter the Megalo Box tournament “Megalonia.” Entering the bottom of the rankings under the name “Joe” he and his trainer Gansaku Nanbu and young tag-along Sachio must overcome not just the fights in the ring, but the many opponents outside of it.

Spiritual Content: Faith isn’t explicitly brought up, but there is a theme of belonging throughout the show. There are also issues of a person’s value if they come from less-than-ideal situations. It’s not about where you start or what others think of you, it’s about what you decided to do with your life now, and finding value in what trusted people believe about you. Even when you feel like you don’t belong, there is a place for you, along with people who will support you.

Violence: There is plenty of violence and blood in the show during fights in and out of the ring. Nothing over-the-top, but because it’s grounded in reality, some of the scenes of violence or gore hit differently. A scene where a character is beaten up/tortured off-screen, but you can hear the screams. A character loses an eye off-screen, we see him immediately after the event, and there is blood.

Language/Crude Humor: Words like a**, a**hole, sh*t, b*tch, and he** are used regularly. I watched the subbed version and can’t speak to the language used in the dubbed version.

Sexual Content: Plenty of scenes of muscular, topless, men in each episode, however not used in a sexual way. One scene of women clothed in short, tight clothing. One girl shows off a tattoo on her upper thigh.

Drug/Alcohol Use: There is a lot of alcohol use in the show for celebratory scenes. Nanbu’s character gets drunk several times during the show. A couple of characters smoke, and there are references to tobacco use and smoking in shops.

Positive Content: Finding a place where you belong and overcoming odds to pursue your dreams, even if it means failure or if people around you don’t understand your goals. Finding a trusted community that you can depend on.

Sports titles usually strike a nerve with me, regardless of the sport being portrayed or explained. It probably has to do with the fact that I played and coached sports throughout my life. Watching underdog characters rise through the ranks and overtake the big, overpowered, fighter/team in the finale excites me. The hope and sense of accomplishment are also factors that impact why I enjoy shows like this. The Rocky Balboa movies are a great example of what I’m talking about, and I enjoy those movies. Rocky also ties in with some of the themes in Megalobox.

Watching someone come up from nothing and go against someone who has everything gets my blood pumping. How many times do you go against the odds? Maybe it’s not a fight or a sporting event, but even as you pursue your dreams and goals, how many times do you feel like there’s very little chance of you getting the job done? Or that no one will understand those dreams?

How far are you willing to go to achieve your dreams and your goals? What are you going to accomplish with your life? What brings you purpose? Where do you belong? These are questions that play a part throughout the entirety of Megalobox’s first season.

The sport of Megalo Box is boxing, but with mechanical limbs attached to the fighters to increase power and speed. The equipment named “Gear” varies from fighter to fighter with some being cheap run-of-the-mill equipment to much fancier stuff that integrates with a fighter’s body. There’s as much mechanical tuning going on as actual fighting when it comes to Megalo Box. It has the vibe of NASCAR, where the drivers are very skilled, but there’s also much more technical and engineering prowess going on under the hood.

We follow “Junk Dog” Joe as he goes from fighting in illegal underground fights with his trainer, Gansaku Nanbu, to taking on top-ranked fighters in the Megalo Box world. This is the premise for the first season of Megalobox, and it starts as far away from success as you can get. 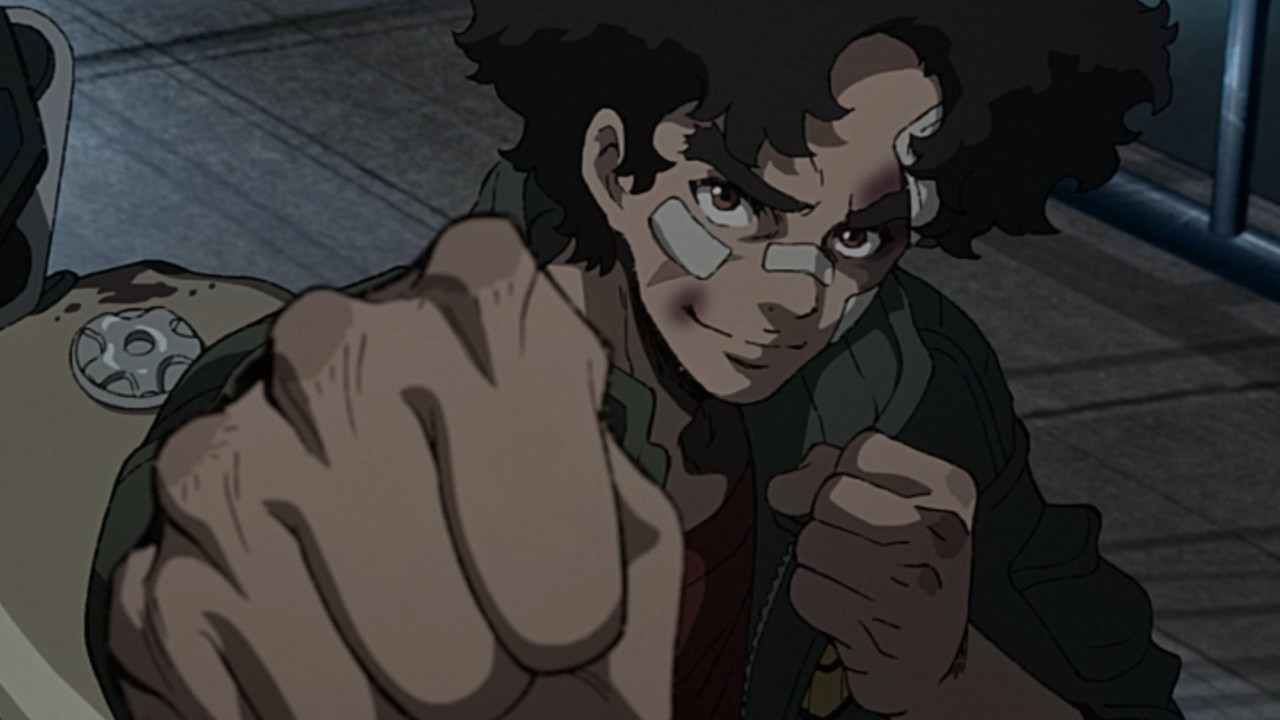 Joe is an extremely skilled boxer, but he finds himself in a spot where he’s throwing fights (losing on purpose) to make crime syndicate leader Fujimaki more money. He isn’t allowed to fight to his full potential, which frustrates him. Joe knows he can win, but no one else believes in him, not even Nanbu. Joe wants to prove that he can beat the best.

Enter Megalonia, a grand fighting tournament that will pit the four best Megalo Boxers in a competition to determine who the greatest fighter is. A chance encounter with the Megalo Boxing Champion, Yuri inspires Joe to reach for his potential and his dreams. As the story progresses to the tournament, we’re introduced to several different fighters, each with their own life, story, and goals. 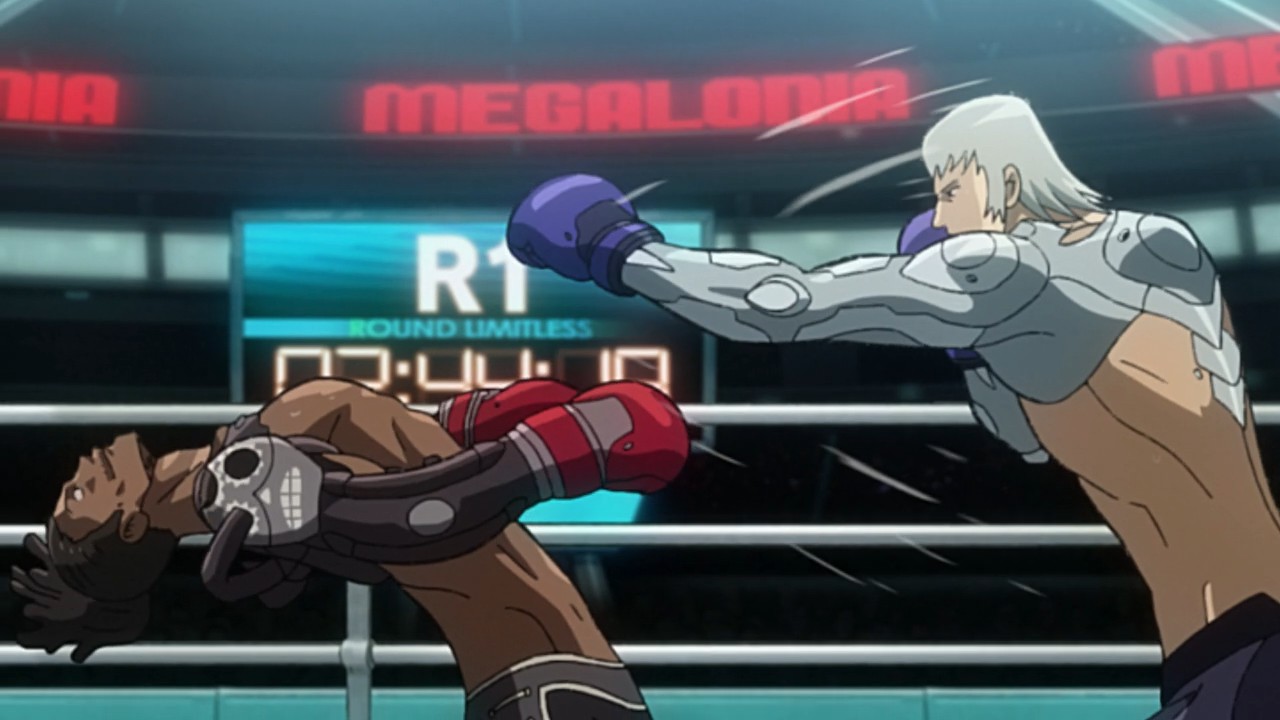 Megalobox sets the stage quickly and gets right into the action, and it is beautiful to watch. The animation does an excellent job of showing the difference between the slums and higher society. It looks clean and beautiful, even when it’s showing dirtier parts of life. The fights are a treat for the eyes and ears with each hit looking and sounding like the impact caused actual pain, sometimes to the point that it got an audible “ouch” out of me.

The soundtrack deserves a shoutout in this review as it is fantastic and was one of my favorite parts of Megalobox. Most of the music revolves around hip hop beats, and there are several moments where actual lyrics were added. The music, along with the action on screen, especially during training or fighting montages, goes together well. Some of the prolific fighters also get entrance themes, which are fun to listen to.

Megalobox’s story went much deeper than I expected. It wasn’t as simple as trying really hard to attain your dreams and the “me versus the world” trope but went more into the status of a person’s life. Topics like how do others see the value of your life based on where you live or where you come from are peppered throughout the season. Joe is continuously compared to a stray dog because he comes from nowhere and nothing. He, and the other main characters, don’t belong.

Characters like Joe, Nanbu, and a kid named Sachio, who eventually joins the group, all get plenty of time to shine. They’re a team, but each fighting their individual battles. Some of these trials happen because of a character’s decision; other times, a bad situation is thrust on them. We get to know opposing fighters and their motivations and personal struggles as well, which was a welcome part of the story. It made many of the characters real, not just obstacles for Joe to overcome. 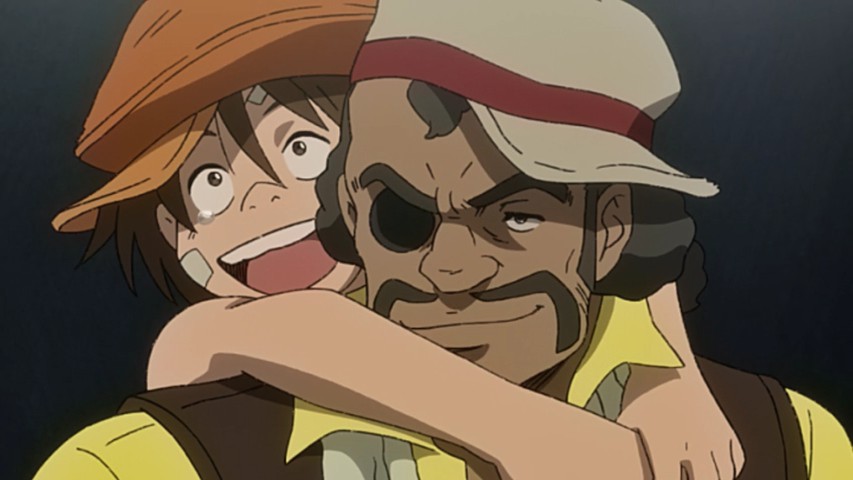 In sports titles like this, there is usually a clear antagonist for our underdog hero to overcome, but it’s difficult to pin down exactly who the main opposing force in Megalobox is, and this is a good thing. Many of the characters we run across are simply after their dreams and goals. For them to attain their dreams, Joe must fail at reaching his. There doesn’t have to be any sense of malice or over-the-top antagonizing; it’s reality.

Megalobox tells a story that we may have heard before, but that doesn’t make the ride any less worth taking. Even if you’re not a big sports fan, there is a more in-depth story here than boxing, and you won’t regret taking the time to explore it. The characters feel like real people just trying to make sense of the world and the situation they’re in. Megalobox strikes at the idea that your life can have more value than what other people see in it. Your background doesn’t determine your future. It’s about continuing to push forward because, as the show puts after every episode, you’re “not dead yet.”

Megalobox combines an excellent story of belonging, finding a family, and learning your value as a person with the fast-paced action of boxing, underground gambling, and life away from the ring. It's a must-watch, especially now that Season 2 has been announced.