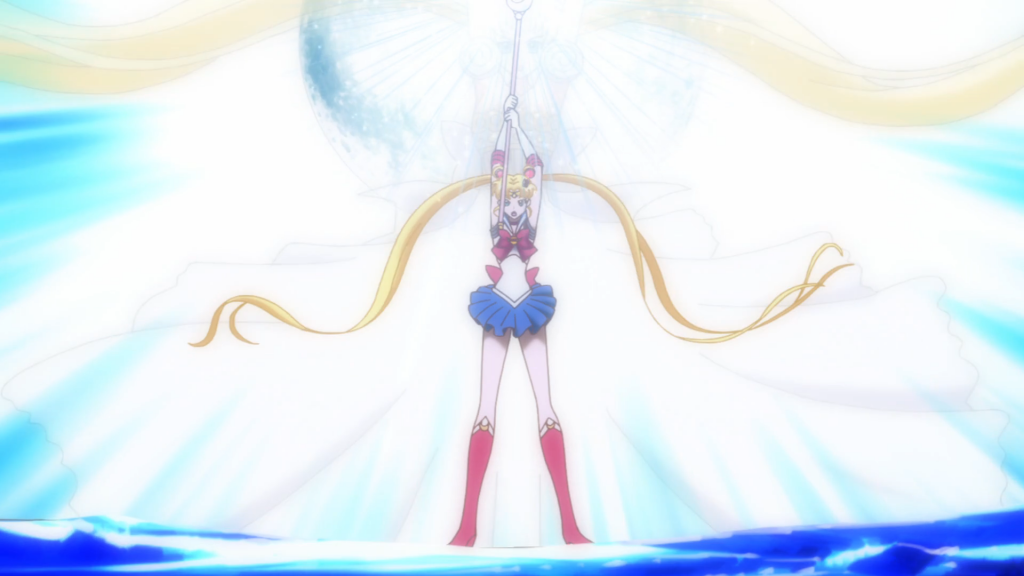 Well, here we finally have it: the actual conclusion to the battle between Sailor Moon and Queen Metalia. Honestly, I still hold to my opinion about this being a fairly suspense-less final battle. Perhaps it’s just because I’m familiar with the Sailor Moon franchise, but it really doesn’t feel like Sailor Moon struggled very much for her victory. In other words, there wasn’t a whole lot of “battling” in this final battle, especially when compared to the amount of talking. Now, granted, it would have been interesting to see how our heroine would have combated a giant cloud of miasma, but I just think that some kind of struggle would have been better than what we ultimately received. I know my criticisms will probably come across as anti-Sailor Moon, and honestly that’s not me at all. I like Sailor Moon, but as a reviewer I need to look at it with unbiased eyes insomuch as possible, and from a critical viewpoint I just see a final battle that was simply lackluster.

What’s worse, though, is that the episode actually does set up somewhat of a potential plot point, but then fulfills it not long afterward. I’m going to get into spoiler territory now, so be warned. During the final “battle” with Metalia, Sailor Moon’s brooch shatters, which, of course, strips Usagi of her powers as Sailor Moon. Now, as the end of this episode suggests (and as anyone with a knowledge of the Sailor Moon franchise knows), there is more to come. It would have been a great plot point for future episodes if Sailor Moon was powerless as new enemies attacked, and therefore had to find a way to regain her powers. Sadly, a short trip to the moon quickly provides her with a new brooch, restoring her powers in an instant.

With all of that said, do I have anything positive to say about the episode? Yes. If nothing else, the actual ending is done right. We get to see where each of the characters are, including Usagi and Mamoru. While, for the most part, it appears to be your typical happy ending, we are given a brief foreshadowing of events to come via a vision that Rei has in the fire, and something completely unexpected happens while Usagi and Mamoru are having their moment. In a way, it actually shatters the “happily ever after” vibe, which is certainly unsuspected given the show’s usual track record. It also clearly sets the stage to show that the Sailor Moon saga is not over.

So, should you bother with Sailor Moon? Yes, you should. If nothing else, it is a genre-defining series and is worth viewing for that very reason (unless, of course, you have no interest in the magical girl genre). My criticisms may not be your criticisms, and where I feel the show could have done better perhaps you feel the show did exactly what it was meant to do. For all of my griping about the final battle being lackluster, you can be sure that I will continue to watch whenever the next arc is introduced.

This episode has a lot to say about prayer. Granted, it is essentially pagan prayer (Sailor Moon is encouraged to pray to the legendary crystal, or the Crystal Tower, or both), but we see that the show doesn’t treat prayer as a superstition with no real effect—these prayers are pretty much the reason the episode goes the way it does. As believers in Jesus, we know that prayer has power and that we can accomplish great things in prayer. For example, it was through prayer that Joshua requested the sun to stand still. James 5:16 tells us that “The prayer of a righteous person is powerful and effective.” Prayer is a powerful tool that God has given us, so let us use it effectively and appropriately to do God’s will here on Earth.

Violence: Sailor Moon attacks Queen Metalia with a giant beam of light; a girl falls on Usagi’s head; a girl points a gun at Usagi

Other: Sailor Moon is encouraged to pray to the Crystal Tower on the moon; there is a bunch of backstory about how praying to the crystal tower will provide protection; Luna is shown praying to the aforementioned tower; the Sailor Senshi seem to provide Sailor Moon with their power despite being (presumably) dead; there is mention of a goddess of the moon; Sailor Moon prays to the Legendary Silver Crystal; the usual magical nature of attacks; characters appear to be resurrected from the dead; Rei is shown praying in front of fire and she sees a vision in the fire