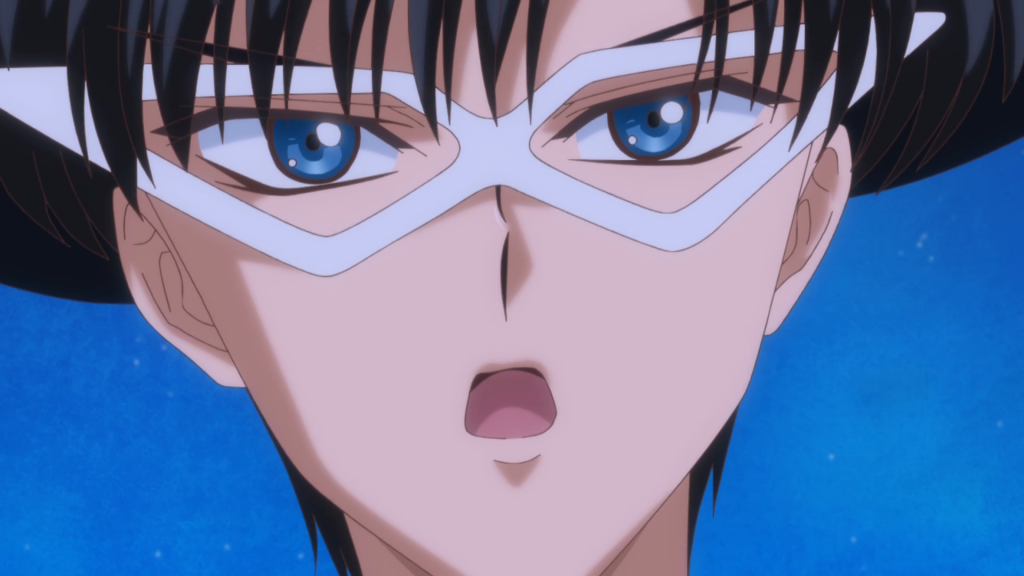 Tuxedo Mask finally gets a focus episode… kind of, sort of, not really. Sure, he makes a rash move in an attempt to gather information on the Legendary Silver Crystal, and we do find out a bit more about his background, but ultimately it still feels like a Sailor Moon-focused theme, especially when you consider that the climax of the episode involves Sailor Moon getting some confidence, courtesy of Tuxedo Mask, just in time to save her friends.

Honestly, if there’s one criticism I can level at Sailor Moon, it’s that the pacing could be a lot better. The episode starts off well enough, setting up Luna’s suspicion of Tuxedo Mask because of his rash actions. The enemy forces decide to use this to their advantage, with Zoisite disguising himself and going on national television in order to hypnotize all of the people watching the program into searching for the crystal. There is even a somewhat intense, albeit brief, fight scene between Zoisite and Mercury, Mars, and Jupiter. The problem is that everything happens too fast. The plot of the episode is very self-contained, presenting and resolving within the 20-some minutes of air time, instead of making it a two-part episode. Building up further suspicion about Tuxedo Mask, making an investigation into his character, allowing Zoisite to create a more havoced environment, a longer fight scene, an actual threat from Queen Beryl showing up on the battlefield… The directors could have teased out any of these. I realize it’s based on the source material, so my complaint should really be against the manga. This isn’t to say that I don’t enjoy the show, or that I didn’t enjoy this episode, but just that I feel it could be done better.

At the end of the day, Sailor Moon fans (old or new) will probably enjoy this episode, as it is follows the typical formula appropriately. If you have never liked the series, then you probably won’t be convinced by this episode (or even by reading this review, most likely).

I know I usually post the Scriptures I reference, but this is a long one, so I’ll just leave it to you to look it up. And no, it’s not laziness, because I literally just copy and paste from Bible Gateway. So our Scripture reference is as follows:

For those who don’t want to look it up, this is basically where Paul is saying that just as our body is made up of many parts that do different things, so the Church is made up of many people who do many different things, and how we all need each other, regardless of whether we have a large or small purpose (my paraphrase, of course). This applies to Sailor Moon’s breakdown with Tuxedo Mask, where she laments that she does not have any powers like the other Sailor Senshi; she can’t shoot mist, fire, or thunder like the other three Senshi. After Tuxedo Mask talks to her and points out her function, though, she finds the strength to transform and ultimately save her friends along with the city at large. It could be argued that, though she saw herself as useless within the Sailor Senshi, she was–and is–ultimately the most useful member. After all, we’ve never seen one of the other Senshi actually destroy an enemy.

We may find ourselves discouraged as individual members of the Church, as well. Maybe you have a visiting evangelist at church who is telling you about his awesome encounters with God, and how wherever he goes he preaches the Gospel and crowds of people get saved. Meanwhile, you’re wrestling with just trying to get prayer down, and you haven’t even figured out how to tell your friends about Jesus, nevermind countless strangers at McDonald’s. This probably discourages you and makes you worry that you’re doing something wrong, because you don’t seem as “holy,” “spiritual,” or “powerful” as the guy on stage. Let’s be real, though: we can’t all be Billy Graham, Charles Spurgeon, or [insert name of well known evangelist here]. Those men (and women) have served their role in the body; it just happened to be a larger role. Rather than compare ourselves, let’s leave our roles for God to decide. Instead of worrying if we’re not “good enough” because we’re not like other people, let’s instead pray and trust God to show us where He wants us to be. We may, for all we know, be an internal organ in the body of Christ, someone who serves a lot in the background. We may never see the kind of results people like Billy Graham do, but maybe our serving makes it possible for those people to do what they do. We can only see a part of the picture, so let’s trust God to put us where He designed us to be, and then be content with that.

Wow, I should take my own advice here.

Nudity/Sex/Fanservice: A flashback to Princess Serenity may show some slight cleavage; Mamoru (Tuxedo Mask) is shown shirtless; Queen Beryl is shown in her usual cleavage-revealing dress; Sailor Senshi transformation sequences; a close up of Queen Beryl’s cleavage around 16:20

Violence: A flashback shows Jupiter destroying an enemy with her lightning; people are shown rioting; Mercury, Mars, and Jupiter battle with an enemy; an enemy is struck by an attack from Sailor Moon