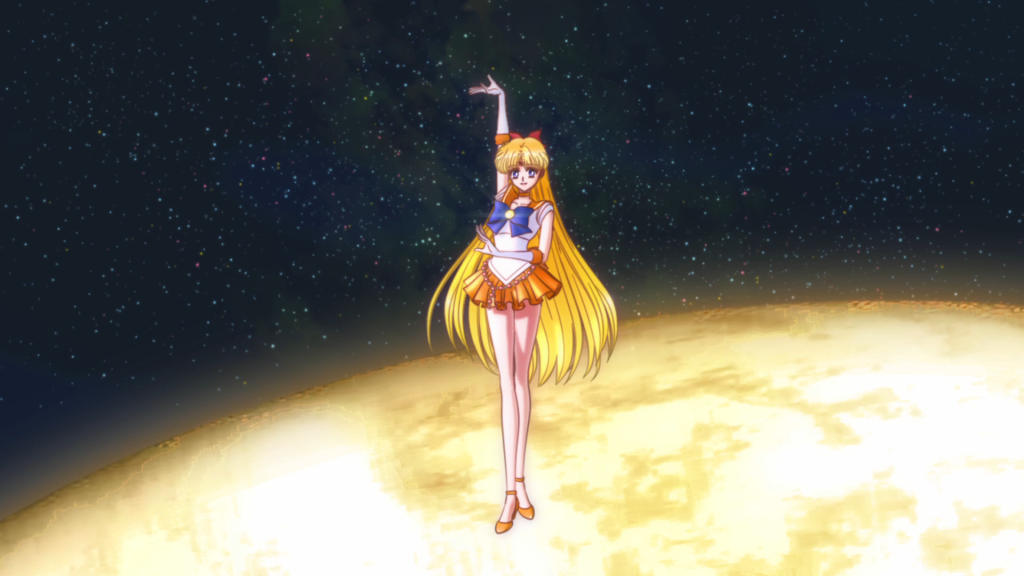 Okay, so my assessment of last episode’s fight (based on the preview scenes) was off. Apparently the fight with Zoisite was pretty much over once Sailor V showed up. Oh well. At any rate, yes, we are finally introduced to the fifth and final Sailor Senshi (at least for this portion of the story), Sailor Venus. An interesting bit of trivia: the Sailor V manga was actually written before Sailor Moon.

So, Sailor Venus shows up, Kunzite is scared off, and Sailor V is officially introduced with her identity as Princess Serenity being announced. This is kind of anti-climatic for those of us who are already familiar with the Sailor Moon story (and, really, for those who have actually paid attention to the closing credits). The episode is sort of divided between the continuing drama of Mamoru/Usagi and the revelation of information about Sailor Venus, otherwise known as Minako. Also introduced in this epsiode is Artemis, a white cat who seems to be to Minako what Luna is to Usagi.

Honestly, the secret about Princess Serenity isn’t very well kept, even within this episode. I really don’t want to say anything, but you may have already figured out the reality of things, anyway. This episode’s climax is, finally, something resembling a potential response to what I’ve been saying. It seems that Venus and Kunzite, this episode’s big enemy, have some kind of history together, though that’s not really revealed this time around. At any rate, we actually get a pretty high-impact battle this time around, with the Senshi not able to simply blow away their foe. On the other hand, the Senshi also seem to gain some abilities that come out of nowhere, such as flying by holding hands and standing in a circle. Also, Tuxedo Mask is shown to be able to jump ridiculously high. While it may seem overly critical on my part, it feels a bit convenient to simply have the girls whip out some new power out of nowhere to meet a sudden need.

The final battle is still relatively quick, but it at least has its suspenseful moments. It’s exciting enough, with plenty of action, and will at least briefly make you hold your breath once, ultimately leaving you holding your breath at the end. The actual ending is truly a cliffhanger this time, you see. So, again, despite my criticisms of the show (Hey, it is what I’m here for!), Sailor Moon Crystal still manages to be enjoyable. It is certainly worth watching if you’re in the mood for nostalgia, or if you simply have an appreciation for the magical girl genre and want to become familiar with the forerunner of the genre as a whole.

This time around, I will be drawing a connection between the conflict of the Senshi versus Queen Metalia to the Kingdom of God and Satan. At one point, Metalia mentions that the Senshi (or Serenity… not sure which, now) will be seeking to destroy her and rebuild the Moon Kingdom. The connection is quite obvious, I know, but, as we know, one day Jesus will return and Satan will be cast into the lake of fire, at which point God’s kingdom will be established on earth and no more evil will reign. While we’re not given much of a look into the Moon Kingdom to see what it was like, we do know that its fall had something to do with Queen Metalia. Much like Metalia destroyed the Moon Kingdom, Satan has, in a sense, destroyed the world as we know it. At the very least, he succeeded in tempting Adam and Eve, thus corrupting the world with sin and severing the connection we had with God. Jesus, of course, came to reestablish that connection, but, as we know, we will still face temptations in this world for as long as we live, as will those after us until Satan is finally defeated once and for all. Much like God’s kingdom will not be established on Earth until Satan’s final defeat, the Moon Kingdom will not be reestablished until the Senshi are able to defeat Metalia. The only difference is that the Senshi actually have a chance of losing. On the other hand, we have the security of knowing Who will win the final battle between Jesus and Satan, because the battle is, in fact, already won. Praise God for that!

“And the devil, who deceived them, was thrown into the lake of burning sulfur, where the beast and the false prophet had been thrown. They will be tormented day and night for ever and ever.” Revelation 20:10 (NIV)

Violence: A flashback shows a still frame of soldiers sword-fighting, as well as a close up of a man fighting away several people; the Sailor Senshi engage in battle with Kunzite; characters are hit with bursts of attacks and the like

Other: The source of the Senshi’s power, as well as Kunzite’s power, is never explained, so whether it’s magic or something else is left to the imagination