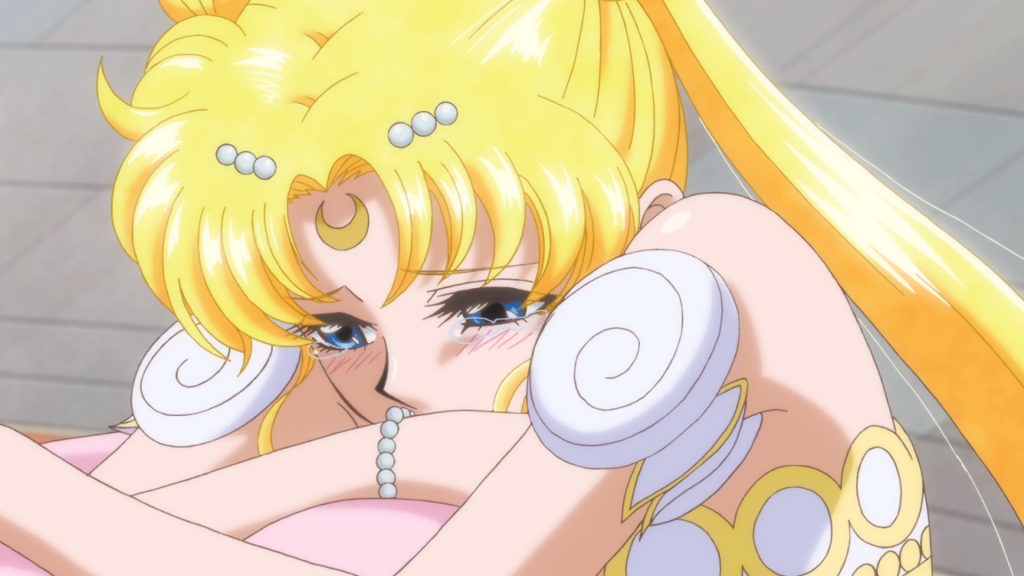 Well, this episode took a much darker turn. We have finally (well, it’s only the ninth episode, but it feels longer given the time between episodes) seen Princess Serenity’s true identity revealed; however, I still hold that it was obvious who Serenity actually was, regardless of your past experience with the Sailor Moon franchise. Anyway, this episode kicks things up a bit with the action, albeit briefly, as the fight between the Senshi and Kunzite/Queen Beryl climaxes and ends. Much of the remainder of the episode deals with the girl-who-is-Serenity (seriously trying not to spoil this, just in case) dealing with the fact that she is, indeed, Princess Serenity. There is the added sadness of Tuxedo Mask’s kidnapping, as well.

If nothing else, this episode deserves praise for the weight that being Princess Serenity clearly puts on the character’s shoulders. She doesn’t receive it with excitement and gladness, as if it’s some small trophy that is just cool to have. Not only is her true identity revealed, but her memories of the past are also restored. She is reminded of her tragic history, along with that of her kingdom and her beloved. Couple that with the events of the present and it’s understandable that she wants nothing to do with the reality of things. This revelation brought the exact opposite reaction of when the girls first found out they were Sailor Guardians. These conflicting emotions are ultimately where this episode shines.

On a different note, I have previously seen comments criticizing the art in the show, stating that there were errors. I will fully disclose that I am not that attentive to detail, and therefore had no idea what those people were talking about. In this episode, though, I definitely felt like there were times where some of the girls’ faces just looked…. weird. Perhaps it’s because the series is being hand drawn (to the best of my knowledge), and therefore mistakes are bound to happen. Perhaps it was just because of differing angles. Whatever the reason, those moments were there, and that is my one criticism of this episode.

I’m not going to bother masking who Princess Serenity is at this point, so if you have not seen this episode and truly don’t know, then you may want to watch the episode and come back. Also, some general plot spoilers are here, too.

The Bible makes it very clear that, prior to Christ, we were dead in our sins and transgressions. In fact, prior to Christ, did any of us think we were doing anything wrong? How many of us had sex outside of marriage and felt it was just fine? How about looking at pornography? Illegally downloading things? I could go on. The point is, before we came to Christ, we did not realize we were sinners. Before being awakened, Usagi did not know she was Serenity. After awakening as Serenity, Usagi was reminded of everything that had happened in that former life—all of the good things, along with all of the tragedy. Once we come to Christ, our eyes are opened, and we see our wickedness for what it is. Like Usagi, we may want to deny it. We may lament that we ever were that person, yet, just as Usagi cannot separate herself from Serenity’s past, so we cannot separate ourselves from our past decisions. But there’s hope.

Venus tells Usagi that she does not have to repeat Serenity’s mistakes. While she may be the reincarnation of Serenity, Usagi is still Usagi, and is capable of making different decisions—only now she is armed with the knowledge of Serenity’s past to guide her. When we come to Christ, we become new creations. No, that does not change what we have done in the past, but it does illuminate the evils that we were once engrossed in, and it gives us something to learn from. No longer do we have to be bound by the former things that enslaved us. While we may lament what we did in our former lives, we do not have to be overcome by despair. Rather, with Jesus by our side, we can move forward, trusting Him to give us the strength we need to make better decisions than our former selves. The bonus is that we can then proceed to lead others away from those paths, or from even walking down them in the first place.[/toggle]

Nudity/Sex/Fanservice: I don’t think I caught this in my initial review, but the intro shows Princess Serenity(?) in a cleavage-revealing dress, and a bust shot of Usagi/Sailor Moon appears to be a nude (where you can see parts of the sides of her breasts); Serenity in her cleavage-showing dress during the episode; another woman shows some slight cleavage in her dress; Queen Beryl cleavage

Violence: Tuxedo Mask takes a blast to the chest; Endymion is cut with a sword, although it’s not explicitly shown; the Sailor Senshi and Kunzite/Queen Beryl exchange attacks

Blood/Gore: There are, what appear to be, red petals (presumably representing blood) in one scene

Other: Serenity refers to it as “God’s law” that people of the Moon and people of the Earth are not to see each other; as always, the seemingly supernatural powers of the Senshi’s attacks as well as Queen Beryl and Kunzite’s attacks