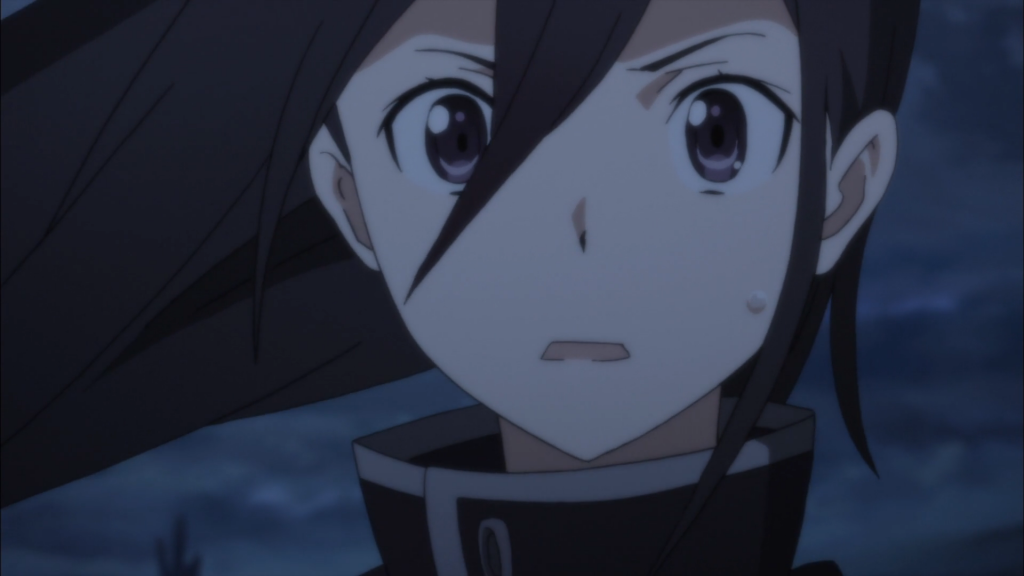 If you were disappointed by the previous episode’s focus on cave-sitting, repeatedly staring at Sinon’s buttocks, then I have good news for you! This episode has at least 50% less cave sitting and 70% less butt focus!* Okay, in all seriousness, this episode was actually enjoyable. It was a good mix of suspense between in-game scenes, real-world scenes, and action scenes, as Sinon and Kirito moved to take out the final innocent combatant while drawing out Death Gun.

Asuna fans should be a little pleased with this episode; our favorite heroine gets some screen time. Not much, mind you—it’s basically her going to Kirito’s hospital room and watching him fight, but it’s more than she seems to get in most episodes this season. Really, it’s just an episode that, fundamentally, is done right. It starts out simply enough, builds up tension, provides breaks to let the tension hang, moves into conflict, and culminates in a climax (a cliff-hanger of sorts, at that). Also praiseworthy is finding out that Kirito’s biggest hang-up in this whole investigation is actually his own doing. For a character who is more than deserving of the label “Mary Sue,” including something that Kirito messed up on his own is kind of a nice change of pace.

As I previously mentioned, the fight doesn’t end here, but the events of this episode set us up for an appropriate final battle in the next.

*Note that percentages are just numbers the author just threw out there, and do not reflect actual, measured statistical decreases in the occurrence of either.

James 1:19 (NIV): My dear brothers and sisters, take note of this: Everyone should be quick to listen, slow to speak and slow to become angry,

I apply this verse to the fact that Kirito’s biggest hurdle throughout this entire series boils down to him speaking instead of listening. Whatever his motivations were, he could have saved himself a lot of trouble had he bothered to listen in the past, instead of allowing his emotions to get the better of him, and thus ultimately barring himself from hearing the information he most desperately needed since his first encounter with Death Gun. I won’t say anymore so as to avoid spoilers, but you can probably figure it out if you think hard enough.

Ecclesiastes 4:12 (NIV): Though one may be overpowered, two can defend themselves. A cord of three strands is not quickly broken.

I apply this verse in reflection of Kirito and Sinon’s cooperation. While it certainly applies to this episode, it can kind of be thematic of much of this season so far. At this point, though, Kirito has finally managed to support Sinon to the point that she seems to have gotten over her fears. While only the first sentence of this verse truly applies to my point, it is still worth exploring. Basically, if Sinon would have gone it on her own, she’d be dead. Not only because she wouldn’t have known about Death Gun without Kirito, but also because of the wounds she carried with her. She did not have the means to overcome her fears in and of herself, as seen when she froze up in the tenth episode. Without Kirito there to save her… well… she’d be dead, for one, but even if that weren’t the case, it was only with Kirito’s words that she was able to regain her confidence.

On the other side of things (because Kirito doesn’t really need more praise), the whole plan for taking down Death Gun is dependent upon Kirito and Sinon working together. If it were just one of them, the whole thing would be, at the very least, more difficult, and, at the most, impossible. Quite literally, one may have been overpowered, but two can defend themselves; Sinon watched Kirito’s back so that he wasn’t attacked by the fourth combatant, while Kirito sought to draw out Death Gun.

Blood/Gore: The usual red marks on people being injured in-game; a flashback shows Kirito decapitate an SAO character; blood in the flashback where Sinon shoots the robber