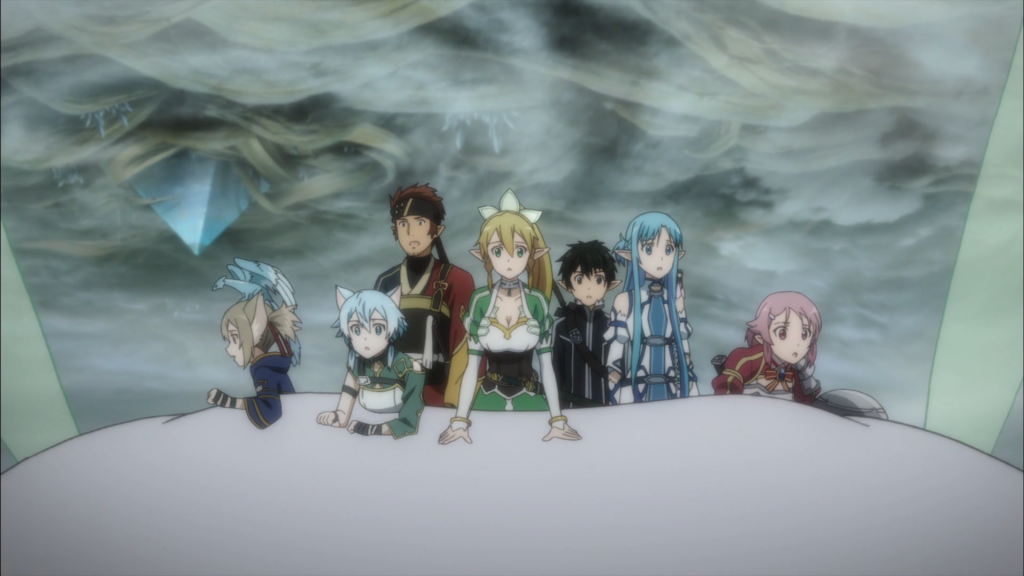 From guns and a gritty, apocalyptic-type landscape back to the fantasy and bright settings of Alfheim Online? I can dig it. I’m much more of a fantasy guy, anyway. This episode launches us into the Excalibur arc, which is apparently a side story within the novels. From what I’ve read, it takes up about half a volume of a light novel. I’ll take it, though. It’s nice to have a break from all of the drama that has taken place throughout the SAO story thus far. Unless something drastic happens, it looks like this will just be a story about friends trying to conquer a quest in a fantasy game.

Apparently Kirito and Leafa accidentally stumbled upon another area of Alfheim Online, completed a quest, and thus discovered a legendary weapon: Excalibur. Sometime later, the existence of said sword seems to have become common knowledge. Of course, what kind of MMO fanatic would Kirito be if he didn’t desire to obtain the sword for himself? So, in proper order, he assembles his ever faithful harem (and Klein) to assist him in his quest. As the party enters this new area of Alfheim online (known as Jötunheimr) they find that other players have, in fact, flocked to the area; however, instead of saving the elephant/jellyfish hybrid as Kirito and Leafa did, the other players seem to be assisting the multi-armed giants. Eventually an NPC appears and explains that Jötunheimr used to share in the bounties of Yggdrasil until Thrym, king of the frost giants, cast Excalibur into Urd’s lake, severing the root of Yggdrasil that fed Jötunheimr and thus causing the land to become a frosty wasteland. As the quest goes, Thrym has promised Excalibur as a reward to the players who will help in his goal of eliminating the animals of the hill giants. Apparently, Thrym’s goal is to advance up Yggdrasil. So, of course, Kirito’s party is tasked with retrieving Excalibur first and putting an end to Thrym’s plan.

Okay, if you want the dark, gritty, plot-driven stories, then you’ll probably be disappointed. For me, though, this is great. I am much more a fan of fantasy settings, and while I certainly didn’t dislike the GGO arc, I already feel more attracted to this current series of events. We also find out that Sinon has come over to Alfheim Online as a Cait Sith, and we get our first look at her new avatar. Overall, it was a fun episode, and it sets the stage for a nice in-game adventure, even if it may be short lived. My one complaint with this episode lies with a particular scene concerning Asuna. You see, when Kirito goes to assemble his friends, he makes a phone call to Asuna. This results in a cut-away to another scene that shows Asuna in the bath. Of course, the artists aren’t content to just let us know she’s in the bath; they have to let us see (almost) everything. It’s not a quick one-shot, either. She is shown in a few different poses, and while I can’t say for sure (because I kept my hand over the screen of the computer to block as much as possible while still being able to read the subtitles), it’s possible that there was also a shot of her bare butt. The whole scene lasted less than a minute, but it’s more than enough time for any male viewers who don’t want to be tempted with bare flesh.

So, there you have it. If you are willing to forgive SAO for its Asuna moment, then you have a decent episode. In fact, the time stamp is in the Content Guide, so if you want to avoid it altogther, then you may do so. If you’re worried about missing content, here’s what you essentially miss: Asuna is going back to Kyoto (not sure what this is about) and wants to see Kirito one more time; then Kirito calls, asks her to meet him in ALO, and she agrees. That’s pretty much it. So go, enjoy the episode, and skip the Asuna nudity.

I watched this episode in two days, and after watching the majority of it during the first day, I was really drawing a blank on a Christian connection. The best I had was something about friends coming together to support each other. Then, as I re-watched a bit of the scene describing what happened to Jötunheimr, a parallel hit me: Jötunheimr was the Garden of Eden, Exaclibur was sin, and the resulting world was fallen. This, of course, makes Thrym the equivalent of Satan. So let’s look at this a little deeper:

As we see in the flashbacks, Jötunheimr was once a beautiful, vibrant land that fed from the roots of Yggdrasil. Likewise, the Garden of Eden was paradise, where God walked and interacted with man. The residents of Jötunheimr were happy, and Adam and Even were happy. Then, Thrym casts Excalibur into Urd’s lake, severing the root of Yggdrasil that brought blessing to the land of Jötunheimr. Likewise, when sin was introduced into the world through Adam and Eve eating the apple, the perfect existence that man had was shattered. Much like Jötunheimr became a barren wasteland, man was cast from the Garden of Eden into the outerworld where:

To Adam he said, “Because you listened to your wife and ate fruit from the tree about which I commanded you, ‘You must not eat from it,’

“Cursed is the ground because of you;
through painful toil you will eat food from it
all the days of your life.
18 It will produce thorns and thistles for you,
and you will eat the plants of the field.
19 By the sweat of your brow
you will eat your food
until you return to the ground,
since from it you were taken;
for dust you are
and to dust you will return.” (Genesis 3: 17-19)

In both instances, the introduction of something that was not supposed to be in the world disrupted the order of things, destroyed the blessing that had been received, and threw the inhabitants into a hard existence. The one place where this comparison falls apart is that the residents of Jötunheimr suffered, not because of decisions they made, but because of Thrym’s own desires. Adam and Eve suffered the consequences of disobeying God and received banishment from the Garden of Eden as their due punishment for their disobedience. Still, I found this to be an interesting connection, and I hope you do, too.

Nudity/Sex/Fanservice: Leafa cleavage; 3:55 – 4:34 Asuna is shown in the bath, naked–anything overtly explicit is covered (meaning you see the equivalent of cleavage, bare skin, and maybe her butt–I kept the screen covered, so I can’t say for sure)–and she is shown from multiple angles throughout; Sinon cleavage; 10:58 – 11:00 there is a moment where Kirito grabs Sinon’s tail, and a freeze frame is shown with Sinon in something of a provocative pose; a female NPC shows cleavage; the end credits show a flashback to Sinon in her underwear within GGO

Blood/Gore: Just the red marks that appear on players and enemies when they’re injured

Other: Characters use magic within ALO