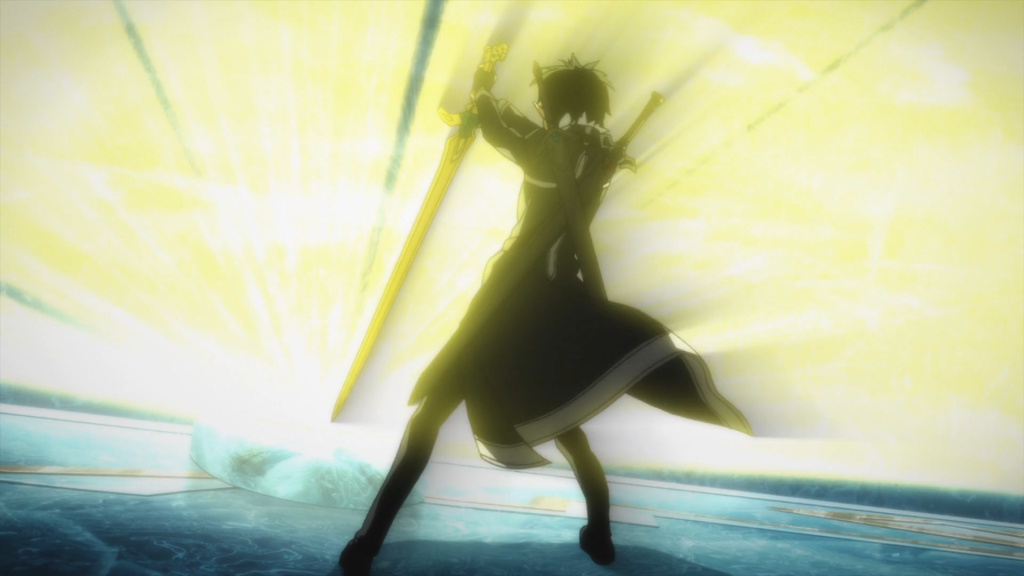 The final part of the Excalibur trilogy is upon us, and a nice portion of the episode is devoted to the final battle between Kirito’s party and Thrym. There’s certainly plenty of action to go around, but one does have to question how much tension there truly is in this fight when Yui is not only able to tell Kirito’s party what Thrym’s next attack will be, but also when it will be. It seems like it would take some of the challenge out of the fight if you knew exactly when you should dodge, although even this advantage does eventually fall through. In the end, the final battle almost feels like it was more of an event battle, all things considered. Viewers familiar with Norse mythology may not find as much enjoyment in this episode, as the plot follows some story within that mythology (or at least as far as I can tell). The “plot twist,” if you will, was discussed in the Crunchyroll comments section, so I, personally, had at least an idea of where the plot might go.

It’s honestly hard to think of much to say in regards to this episode. Based on my points above, you can see how it is easy to start dissecting the various elements of the fight and find flaws, but, in the end, I don’t know that this was ever meant to be a particularly serious entry into the Sword Art Online mythos. If nothing else, the Excalibur mini-arc was a fun, refreshing break from death games, psychotic rapists, and murderous siblings. Realizing that Kline’s weak demeanor towards attractive women is probably what brought victory to the party adds another amusing level to the conclusion of this particular arc.

In the first part of this trilogy I drew a connection to the fall of man and the destruction of Jötunheimr, so it only seems appropriate that this episode allows for a comparison of the restoration of Jötunheimr and the establishing of a new heaven and a new earth.

Revelation 21:1 – Then I saw “a new heaven and a new earth,” for the first heaven and the first earth had passed away, and there was no longer any sea.

As Thrym’s castle crumbles, we see the rebirth of Jötunheimr, and greenery and life return to the desolate land. As imperfect as this analogy may be, we can compare this to how God will one day create a new heaven and new earth after the events detailed in the rest of the book of Revelation. Of course, what God will create will ultimately be beyond anything that the creators of Sword Art Online could have depicted in this episode.

I have to apologize this time around, as I seem to have lost my notes from this episode. From what I can recall, there was, of course, the typical violent content you would expect, female characters with cleavage, and a close-up of a man’s butt. I will update this review at a later time if I come across my notes.