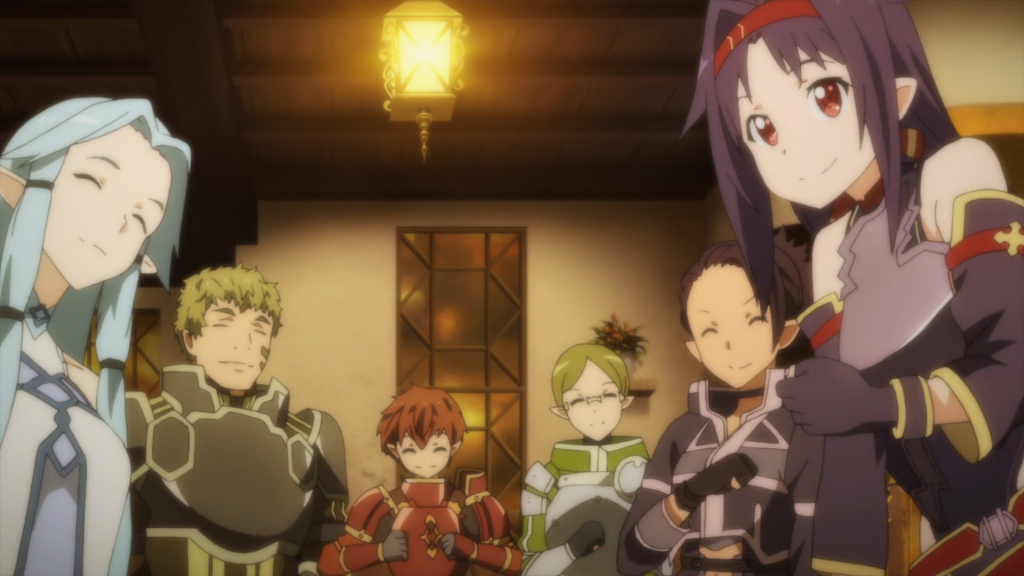 This is an interesting arc. On the one hand, you have Asuna’s adventures in Alfheim Online, which presents a fun, fantasy-filled adventure. On the other hand, you have the real life drama that is happening between her and her mother. While there is certainly more focus on the former than the latter, the scenes between Asuna and her mother certainly leave a heaviness in the mind of the viewer which gets carried into the game world. This arc also gives insight into how something seemingly pointless to one person is meaningful to another. To most people (especially non-gamers), the quest that Yuuki’s group has hired Asuna for would seem like a pointless waste of time; however, to that group, the mission has meaning and is therefore important. While life certainly requires proper prioritization of events, we all have things that we enjoy that other people just wouldn’t get.

So here we have this group of players who simply want to defeat a boss, get their names on the stone in the first floor, and ultimately make a fond memory together while they still have time to play as a group. As if this goal wasn’t hard enough by itself, the threat of other players trying to take the “boss kill” also looms over our heroes’ heads—a threat that doesn’t come out until it’s (almost) too late. Again, it really shows a difference in perspective, as a non-gamer would likely look at something like this in real life (or perhaps even this show) and think it absurd that people are being this competitive over something in a videogame; however, it is clearly meaningful for all of the players involved.

Another notable aspect of this episode is the ever-present sense of dread that comes after Asuna’s confrontation with her mother. To be fair, Asuna is at fault this time around, as the problem truly arises from a time management issue; but her mother’s threat certainly does a good job of putting paranoia in the mind of the viewer. Thankfully, that threat doesn’t manifest; instead, we are treated to a fairly epic ending, which certainly promises plenty of action in the next episode.

Whatever your hand finds to do, do it with all your might, for in the realm of the dead, where you are going, there is neither working nor planning nor knowledge nor wisdom. – Ecclesiastes 9:10

This verse applies nicely to the principle cast for this particular arc. Asuna’s new friends are willing to do whatever it takes to achieve their goal of defeating the boss with just their party, even if it means dying and going back to start all over again or facing a horde of players that far outnumber them. In other words, instead of getting discouraged at the frustrations they face, they continue on with all their might, applying themselves fully to the task at hand. While I may not be the best person to give this advice, we as Christians should learn from this, as the Christian life will inevitably be a journey of ups and downs, highs and lows; much like the characters in question, we also have an ultimate goal in mind: finishing the race and living eternally with Jesus. Certainly a much grander goal than defeating a videogame boss, to be sure, and therefore worth even more effort than what the characters are putting into their goal.

Violence: Asuna has flashbacks about a battle in SAO where players are being killed by a boss; typical in-game violence of sword fights with monsters; a monster is cut with a sword; Asuna flicks another character in the forehead; PvP sword-fighting action

Blood/Gore: The red marks that indicate damage in-game; a flashback to Heathcliff killing Asuna shows a giant red streak across the screen, which could possibly symbolize blood—red fragments are also shown coming from her body