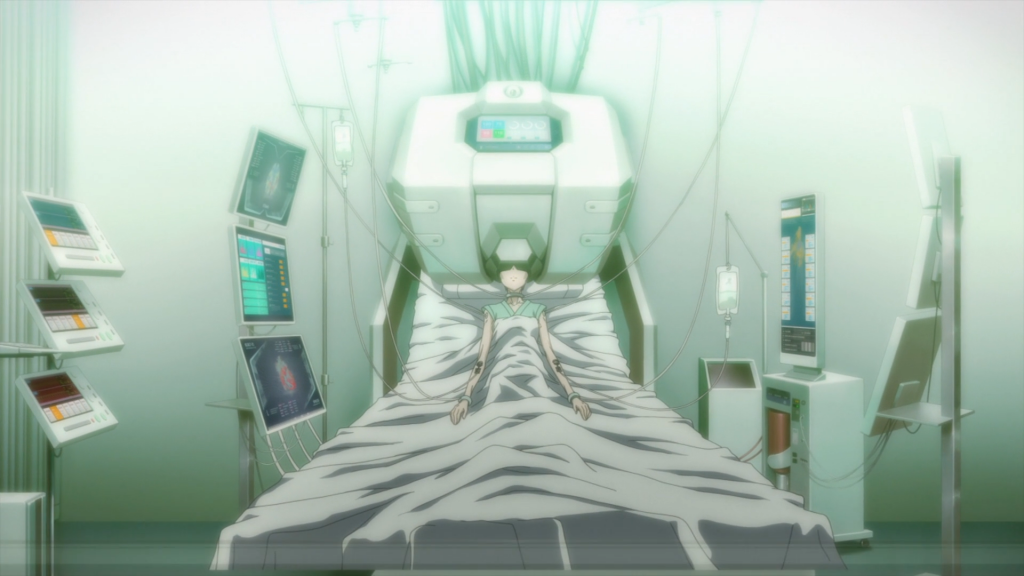 In this week, the action-oriented scenes take a backseat to dramatic content and the explanation of Yuuki’s situation. After her sudden logout three days prior, Asuna has been unable to contact her new friend, and no one seems to be giving up any information. Siune shows up, but doesn’t offer Asuna any real explanation as to why things are the way they are, and simply logs out when the questions get too hard. One has to ask, though, why Asuna seems to hesitate for so long before trying to stop the log out process. In this episode, she doesn’t jump up until around the time Siune is actually logging out. Had she grabbed Siune’s arm as soon as she started making the sweeping motion, perhaps Asuna could have stopped the process. That’s neither here nor there, though, as Asuna does eventually get her answer and, as you may have guessed, it is tragic.

How much you will enjoy this episode will probably be affected by how emotionally invested you are in the characters. Those who enjoyed this arc will be more likely to be touched by this episode than those who have only stuck with it or found little enjoyment at all in it. There is a lot of talking, with only a few scene changes throughout the process, but it really is the beginning of the conclusion to the Mother’s Rosario arc. Yet again, Asuna can credit Kirito for helping her out, although how he obtained the information he possessed is not really explained. Perhaps the next episode will reveal this, or perhaps it will forever be a mystery. It’s hard to say too much about the episode without spoiling anything, really. If you tend to cry at sad scenes, then prepare to cry in this one. If you tend to look at the brighter side of things, then it is reasonable to suspect that the project Kirito is working on to bring Yui into the real world may go on to have a much deeper and more meaningful purpose. We will have to wait until next week to find out, and there will probably be more emotional moments to come, but let’s stick with it and see how this wraps up!

So, in this episode we find out that Yuuki is dying. What we don’t see, though, is a person who is broken, scared, or destitute. Instead, we see someone who is at peace with her fate, ready to accept it. While this may not have always been the case, it seems to be now. As Christians, we should be able to face the possibility of death with at least as much peace of mind as Yuuki (if not more). After all, we know where we’re going. If we’ve come to believe in Jesus as our Lord and Savior, then we know that we have eternal life in Him, and so the prospect of death should be a minor thing to us. Note that I said “should be,” because it often isn’t. Maybe some of us struggle more than others with a fear of dying, but I’d reckon that we all have feared the idea of dying at some point in our Christian lives. Yuuki may not be real, but let’s still consider her resolute acceptance of her impending death and find even more confidence to face our own impending deaths (whether they be tomorrow or 80 years from now) in the arms of our Savior. If you are reading this and do not know Jesus but would like to (and thus have confidence when your day of death comes), then please consider the information below: