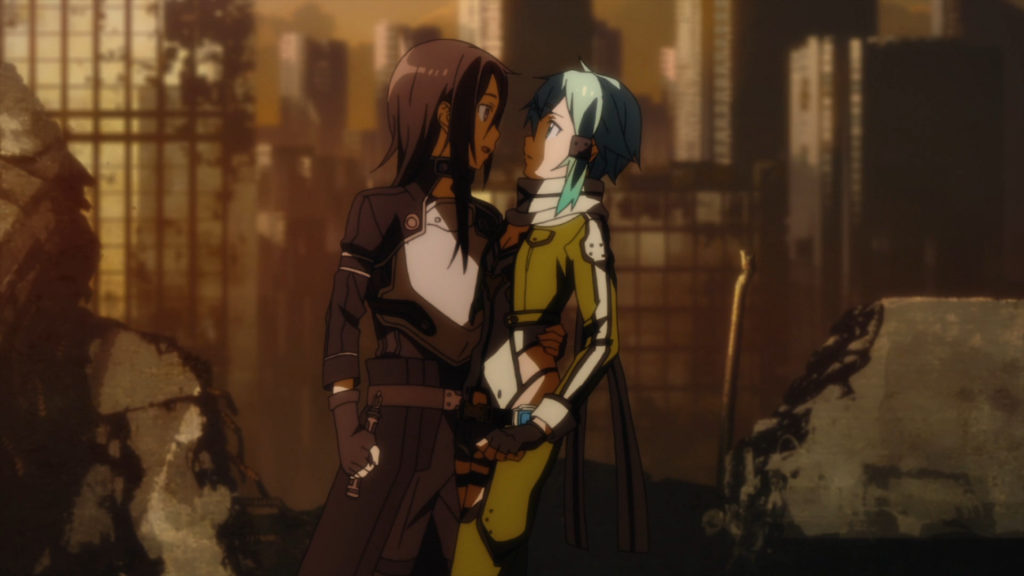 Well, it turns out Kirito isn’t unshakable after all. After his run-in with another SAO survivor from the previous episode, he seems to be quite disturbed. The reason may very well have to do with the raid he took part in during the days of SAO, which we get to see via flashback. As you already know (at least, you should if you’ve watched last week’s episode, and if you haven’t then why are you reading this review?), Death Gun is part of the Laughing Coffin guild, which was the guild of murderers in SAO. Clearly, Death Gun has not left those days behind, as we have already seen in GGO.

This is one of those reviews where I find myself at a loss for words. Did I enjoy the episode? Sure. Did it leave much of an impact? Not really. If you like action, then you can expect to see plenty of it in this episode, as we’re treated to a Kirito versus Sinon scene, which I honestly didn’t expect to see so early in the series. Of course, with Kirito so shaken up, it doesn’t end up being much of a fight. Overall, if you feel like Kirito is an over-powered character, then this isn’t the episode to change your mind. If you’re simply a fan of SAO in general, then I don’t think there’s anything here to dislike.

Well, the best I was able to come up with centers on this verse:

Colossians 3:23 – Whatever you do, work at it with all your heart, as working for the Lord, not for human masters,

While Kirito certainly had some extenuating circumstances going on, the fact of the matter is that he ultimately offended Sinon with his flippant attitude about their fight. In his fear, he forgets the promise that he had made to her earlier, and essentially states that he’s only concerned with getting to the finals. While he ultimately makes it up to her, the point here is that he upset her because he didn’t go at the finals with all his heart. Now replace Sinon with God and imagine how upset He is when we take a flippant attitude with the life and things He has given us. I know I’m guilty of this on a daily basis. I tell myself that I have a great witnessing opportunity because I work in a college and deal with a lot of students. I tell myself that, with the right attitude, I can show the love of Christ. However, I get to work and I simply start counting down the hours until I get off. I may start out with a cheery demeanor, but eventually I allow myself to get run down and just start going through the motions. Perhaps I make God feel kind of like how Sinon felt–aggravated that I failed to keep what I intended to keep.

Violence: Flashback to a fight in SAO where players are killed–lots of sword play and whatnot; the usual GGO violence–gunfire, an explosion, and of course Kirito’s swordplay

Blood/Gore: Just the red marks that appear on characters when they’re wounded