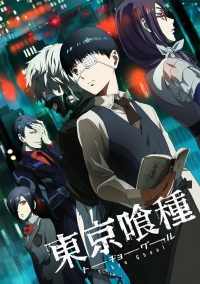 In the Geeks Under Grace community, Tokyo Ghoul has come up many times in discussions on favorite anime. I never picked up too many details on why, only common praise about how it was “so good” and I “needed to watch it.” Tokyo Ghoul has been on my list of anime to watch as I continue my journey exploring various genres. Horror films and television shows are not something I see very often, so with my little knowledge of the series, I wanted to know how much horror is really in Tokyo Ghoul. With the recent release of Season 3 (a.k.a. Tokyo Ghoul:re), I decided it was time to dive in. After watching the first season, Tokyo Ghoul is possibly one of the most unique anime I have ever seen. In this review, I will dive deeper into whether that is a good or a bad thing.

Spiritual Content: A scene takes place in a church where a woman is placed on the altar to be eaten by a ghoul. A fight also breaks out during this scene, causing interior destruction as pews and other parts of the building are damaged as a result of the fight. This shouldn’t be taken as especially disrespectful, as old Catholic churches tend to be a common setting in horror/gothic-themed media.

We do not know the origin of ghouls, at least as of this season, so any spiritual element in this regard is still uncertain.

Violence: Throughout the season there is an obscene amount of blood. Heads and limbs are severed often, with character impalement being just as common. In one instance, a character smashes in the face of another from across a coffee shop. A character is tortured in one scene, though the act itself is not shown directly. However, in that same scene we do watch a deadly centipede enter the victim’s ear and cause them excruciating pain. There is so much violence that it’s impossible to mention every single instance.

Something that should be noted is how battles are fought. Ghouls have a special organ in their bodies that gives them unique abilities. This organ is called a kagune. What makes this worth mentioning is that an anti-ghoul task force called the CCG encases the organs of a deceased ghoul in order to utilize a kagune for their own combat purposes; these modified kagune are referred to as quinque.

The topic of cannibalism comes up a few times. Some ghouls only view cannibalism as consuming one of their own. This comes up when a ghoul is thrown into an arena and served up as “the main course.” The actual devouring of bodies and corpses takes place off-screen, but characters do get bitten, and its usually somewhere on the shoulder. One character has a severed hand forcefully shoved in his mouth as a means of sustenance. 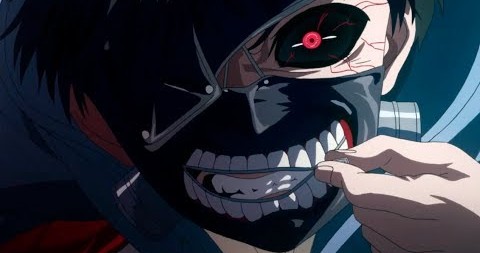 Drug/Alcohol Use: A discussion between ghouls takes place in a bar, but they are not actually drinking anything because normal food and beverages taste terrible to a ghoul.

Sexual Content: There are quick shots of two fully-clothed characters making out as a female sits on the male in a chair. A character walks in on them, and the woman runs out of the room as a result. The male later asks the character who walked in what he saw. One character has an obsessive pseudo-fetish directed towards the protagonist.

In the another scene we watch a woman throw herself on the back of a clothed man. She is wearing no clothes, and though her breasts are not fully exposed, they are still mostly visible during that moment.

Some shower scenes occur, all of them featuring a male character. At one point all that is exposed is his upper body, but in another scene he is fully nude and sitting on his knees. The angle of that scene keeps any genitals from being exposed.

Other Negative Themes: It’s probably not a good idea to watch this when children are present.

Positive Themes: This anime may hold a super dark tone, but it does well in touching on a few deep topics. For example, the morals of being a ghoul. Does being a ghoul mean you must kill people for food? These topics lead into a discussion of morals and what ghouls do to survive—both the good, and the evil. 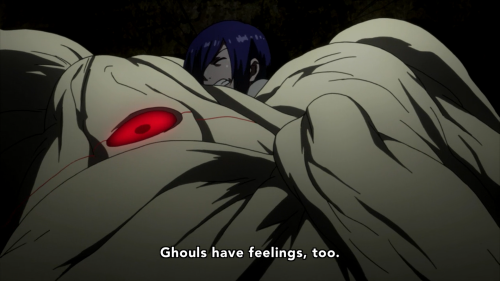 Before I get too deep into the review, I want to further stress how violent the show can be, on top of our content guide. The first episode is not afraid to show the audience what to expect. Throughout the season there are moments where I could feel the intensity, stress, and dread these characters were feeling. The fact the show had me feel all of those things means it certainly lives up to its genre.

In Tokyo Ghoul, humans live among a species known as ghouls. The biggest difference between the two is that ghouls do not eat regular food. Human flesh, blood, and organs are the only thing that satisfies their hunger. In that way, the comparison could be made to zombies, except ghouls aren’t “undead.” They possess an extra organ that grants them enhanced abilities when they feed.

The direction of the show is one of my favorite things about Tokyo Ghoul. I’m going to give my best shot and discuss the basic plot without giving major details, because I want readers to experience it for themselves if they decide to watch. In the first episode, we join Ken Kaneki as he lives out what he thinks will be a normal day. Due to a series of events that take place, he wakes up in a hospital bed no longer a complete human being—now partially ghoul. 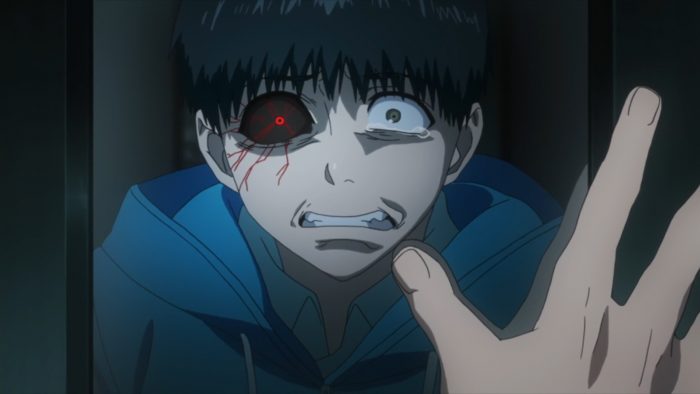 From the beginning to the final moments of the season, the audience takes that journey with Kaneki. We experience all the terror, fear, and confusion he does. The interesting thing about Tokyo Ghoul is that the world begins to feel slightly less horrific as Kaneki becomes acclimated with the culture of ghouls and his new way of life. He finds himself with a group of ghouls that seem to be unlike the rest, the ones perceived as monsters. In this way, it’s a little like Twilight.

Tokyo Ghoul has a way with characters that I have not seen with any other anime. All of them are very well-written, which had me invested in them whether they were good or evil. There were even a few I assumed we would be done with after a few episodes, but returned to give an encore. For example, there was a character I didn’t expect to like due to his opposing nature, but we end up learning more about who he truly is and the burden he carries. In that moment, he became an important addition to cast. In terms of performance, all of the voice actors did a great job in their roles, though there was one which stood out to me the most. 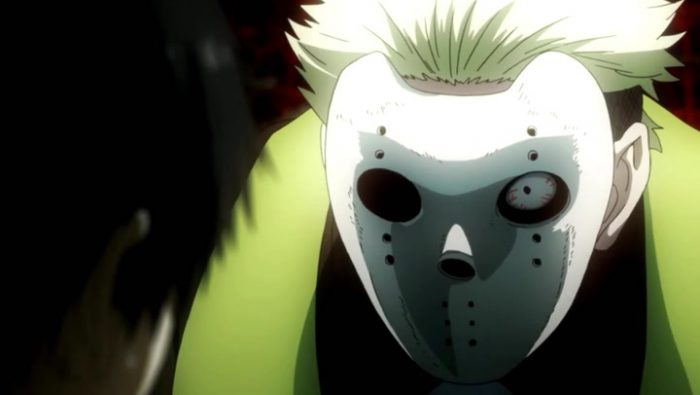 Christopher Sabat plays a character who goes by the alias of “Jason.” Within Sabat’s work, he is commonly known as Vegeta and Piccolo from Dragon Ball, Alex Armstrong from Fullmetal Alchemist, and All Might from My Hero Academia. Those roles are great examples of the kind of characters he plays, but his role as Jason is so much deeper here. His presence brings terror when he is on-screen, and that’s even before we learn his backstory. As the Big Bad of the season, Sabat takes this role and gives a standout performance.

We learn pretty quickly that ghouls have special abilities, except I never actually knew where they came from until I researched it. These abilities are called kagune, and come from a special organ of the same name, found in the body of a ghoul. Kaneki’s comes from his back and is very tendril-like, while another character has crystallized wings which allows her to shoot shards at her enemies. To counteract these abilities, an anti-ghoul task force developed a way to steal kagune and modify them into quinque. I could have missed an explanation to both of these at some point, but the fact I had to look them up becomes an important misstep in world-building which shouldn’t have occurred. 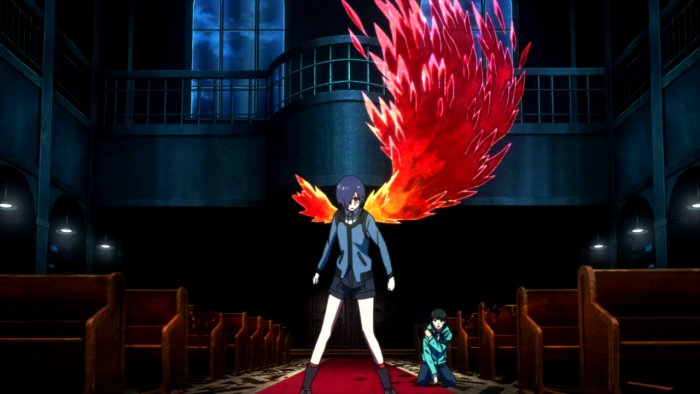 Another key issue I have with the world-building is that we never learn the origins of the ghouls. I’ve come to appreciate the mystery behind this, but I would still like to know at some point. It seems strange this information is still undisclosed, since the ghouls have adapted and been almost “accepted” as a part of society at this point.

Even with those issues, I enjoyed how we learn more as Kaneki adapts to his new life. The pacing was especially well-executed and takes its time to build to the final events of the season. The first few episodes start off slow, but pick up as the season progresses. Tokyo Ghoul has the typical hero trope where the main character is more special than the rest, but it’s written into the show in such a way that he is not super overpowered among the rest of the gang.

The production value stands out among other anime I’ve seen. It feels as though some shows take inspiration from other, previous works to utilize recognizable and popular art styles, but Tokyo Ghoul seems different. The animation is fluid, along with a clean visual style that could rival some feature anime films. I’m looking forward to seeing how this style will evolve in future seasons. 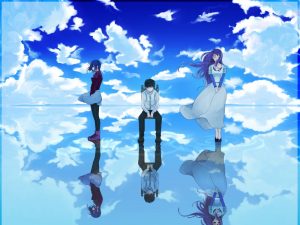 One of my favorite intros in all of anime

Tokyo Ghoul is one of the most violent anime I have ever seen, which tells me that not everyone will stick with it. The characters and writing are what kept me moving forward through the season. The backstories are so well-written that the world-building might have taken a slight hit as a result. High production value in the animation and visual style are also a huge plus for anyone who is willing to watch through the bloody mess. As a final point, I couldn’t consume Tokyo Ghoul without watching at least three episodes at a time. It kept me on the edge of my seat until the very last minute of episode 12. I can’t wait to see what future seasons have in store.

Tokyo Ghoul is a memorable anime due to its solid pacing. It contains a good blend of character development, a well-written story, and plenty of action, even if some world-building elements might be easy to miss. On the downside, the violence is so extreme that it will likely turn away certain audiences.