Review: Weathering With You 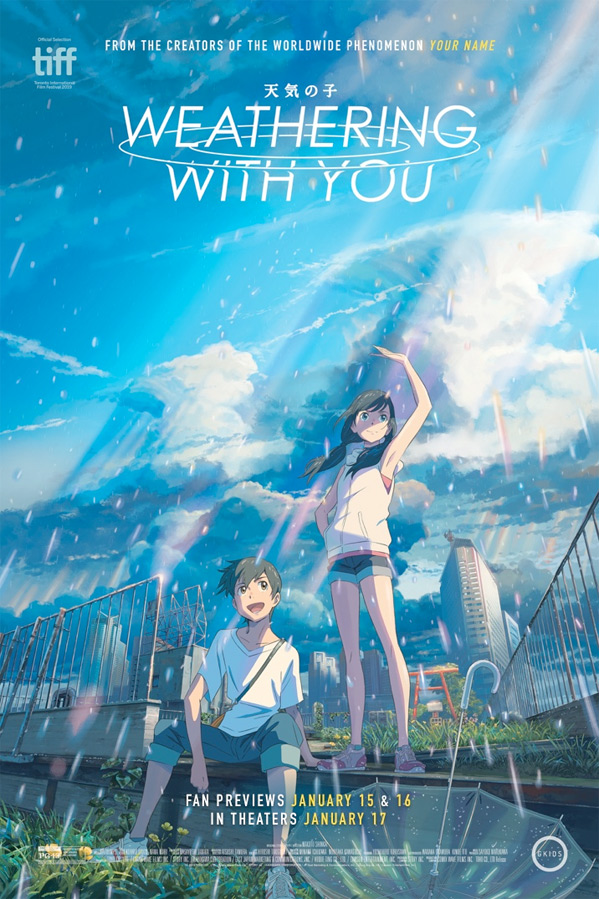 Director Makoto Shinkai is certainly no newcomer to the anime world. Often heralded as the “New Miyazaki”, he has been winning awards right from the beginning of his career. The highlight, of course, was the phenomenally successful animated feature, Your Name, which at the time of release was the highest grossing anime film in Japan, and is still enjoying a place on IMDB’s Top 250 list. It’s a tough act to follow, and many are wondering whether his newest film can live up to his reputation, or whether Shinkai’s best works are already behind him.

Language/Crude Humor: Please note that this section is judged on the English subtitles: the original language (Japanese) may contain subtle nuances in the dialogue that could be interpreted another way, or different releases of the film may feature slightly different translations. The version I watched used God and Jesus’ name in vain, bull***t, and minor swears like b*stard, dumb and cr*p.

Drug/Alcohol References: One character repeatedly drinks beer and smokes cigarettes, although he is trying to quit the latter. Beer is thoughtlessly handed to a minor, but they refuse to drink it.

Sexual Content: An unemployed teenage boy is jokingly told he could work in a sex club. While only subtly hinted, a teenage girl is pressured to work in the sex industry. Close up on a woman’s cleavage—she teases the other character for looking at her breasts. When asking advice for what to give a teenage girl for her birthday, someone replies to the boyfriend to “bang her”. A young boy is jokingly portrayed as being a ladies man, as he holds many different friendships with young girls. A boy asks his older sister to have a bath together—she is instantly repulsed and rejects the idea. A bra is held up while an apartment is cleaned. A teenage girl bares her chest, but nothing is seen as the skin is transparent. A little girl asks a boy to feel her heartbeat—a nearby adult gives a questioning glance. There is an ongoing gag about a woman being a mistress.

Spiritual Content: Heavy Shinto influence seen throughout the film. A character investigates local urban legends as part of their job. Gaia theory is mentioned. A smoke ceremony is conducted in the hopes that it will lead a deceased loved one back to their family. Characters theorize there is another world in the sky. Heaven is mentioned, and characters frequently pray to a higher being.

Other Negative Content: A man hires an underage boy and pays him poorly. A person mentions they are working in a sweatshop. Characters are frequently seen resisting arrest and running from the police.

Positive Content: The film promotes the concept that every life has value. Characters learn to be decisive and to accept responsibility for their actions. 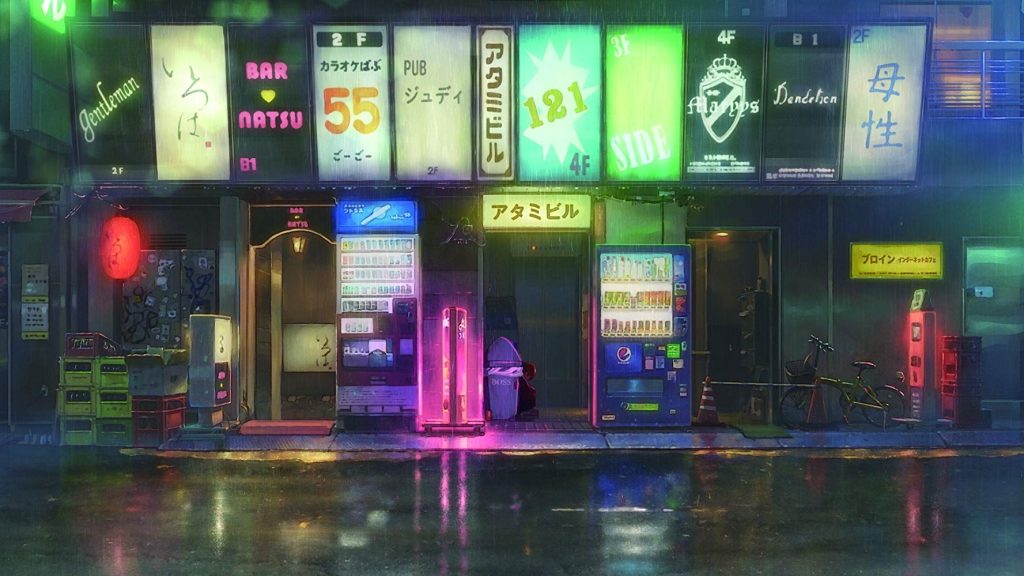 There is something incredibly endearing with Makoto Shinkai’s newest film, Weathering With You. It follows the formative teenage years of Morishima Hodaka; an underage runaway that’s trying to make ends meet in Tokyo. When he’s not battling his crippling financial insecurity and general hostility from others regarding his circumstances, then he’s enduring the barrage of rainfall and other uncharacteristic weather patterns that’s plaguing the city. Yet it isn’t long until this resilient teenage underdog meets the girl of his dreams, Amano Hina, who literally has the power to brighten his day.

There’s a lot happening in this story outside of the main romance. There’s a brief dilemma over the possession of a firearm, a side plot about child custody, and the day-to-day business activities of a minor publishing company. While these elements pop in and out of the story, sometimes for so long they are almost forgotten, they all still contribute to main thrust of the narrative, beautifully fleshing it out even when things take a turn for the supernatural. Less streamlined compared to a typical American animated feature, these little side plots would distract or side-track a lesser film, yet in Weathering With You they not only color the plot, but also keep the pace moving. It’s a story that maintains a viewers interest from its opening frame right up until the credits roll. 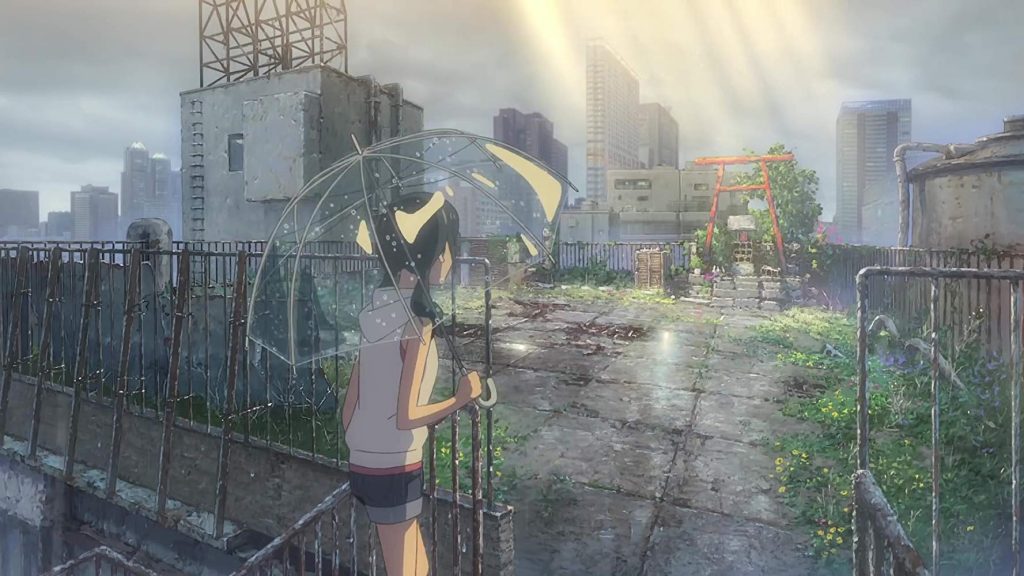 It’s a film that isn’t afraid to be messy. A number of issues are left unresolved or aren’t tied up neatly by the film’s end. Most notably is Hodaka’s backstory and the reason for why he is running away in the first place. It isn’t actually necessary to know as the information does little in the way of plot development, but it does leave a bit of a void when the time comes to raise the stakes.

The film’s conclusion may also leave audiences curiously unfulfilled. Gutsy choices are made, where the story feels like it travels against the grain compared to more traditional narrative trajectories. Yet any sour taste cleverly feeds into the main dilemma of the film, allowing the viewer to realize they harbor the same bias as the people of Tokyo. Learning from this perspective, the ending then becomes unabashedly romantic, throwing caution to the wind as the fate of their decision is made clear. It quickly becomes the most memorable aspect of the movie.

There is a gleeful innocence present throughout the film, with the movie’s score heightening all the right emotions at just the right time. Complete with gorgeous animation, it’s easy to get wrapped up into this story, even if it is uneven in places. One of the more annoying aspects of the film is that it’s clearly a God vs. Man, or Nature vs. Man tale, and while it does have a dose of humanism thrown in for good measure, there are points in the story where characters are blamed for circumstances that are hopelessly out of their control. These moments do thematically straighten out further into the piece, but while they are still unfolding, these incidences feel frustratingly overwrought with emotion and the focus of blame appears nonsensical. 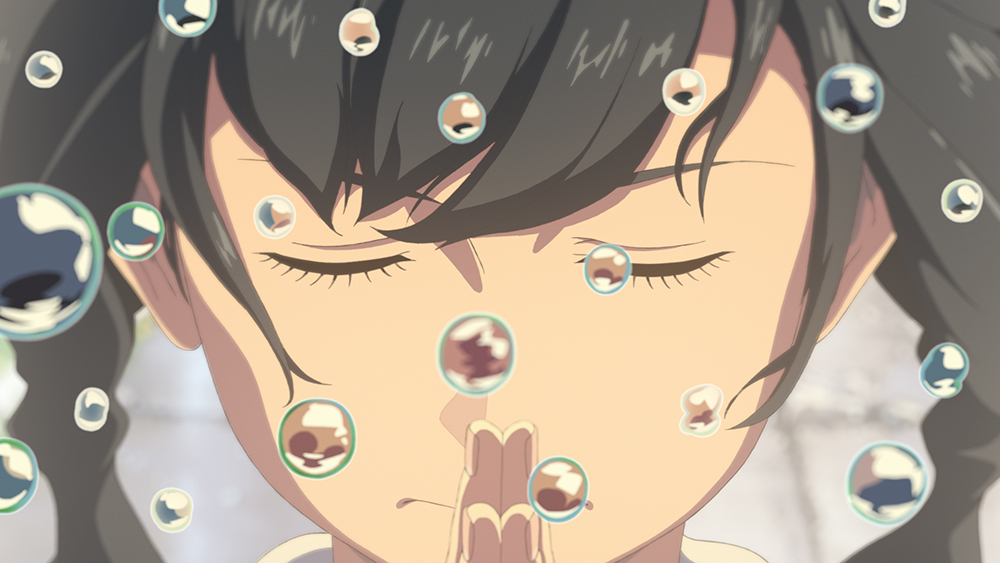 The upside to this type of genre story is that it’s refreshingly open in regards to the topic of prayer. It’s not a plot that could be easily remade for American audiences. In an age in the West where the saying “thoughts and prayers” is usually met with sneers and derision, here in Weathering With You there is little to no doubt about the power of prayer or whether a deity exists.

It’s a story that taps into the old definition of “tragedy” as first seen in ancient Greek theatre, where a person must hopelessly battle against their predetermined fate, as opposed to the modernized sense of the word which merely has the genre reduced to a plot that contains a series of “sad events”. Proper tragedies aren’t seen too often in cinema, and their juicy conundrums are always welcome. Though Christians may uncover another layer of intrigue in comparing the theology of the film to the lessons of Scripture, finding comfort in the thought that our Lord never places a limit on prayer or a catch in place.

Weathering With You is certainly an interesting and entertaining film that contains a number of surprises along the way. Its greatest criticism may simply be that it’s not as good as Your Name. As it stands, it’s a fine film but it’s not mind-blowingly excellent. It’s a shame that it will always be compared to Makoto Shinkai’s previous movie particularly when both stories share a few similarities, though Your Name explores those themes better. It’s certainly worth a look as it’s a competent bit of filmmaking, though don’t go in expecting another masterpiece. 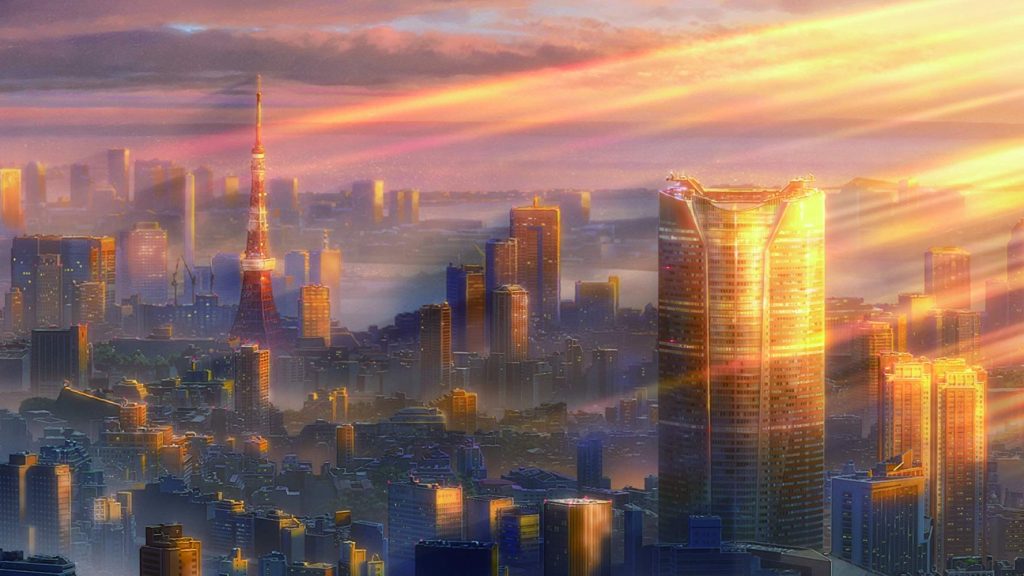