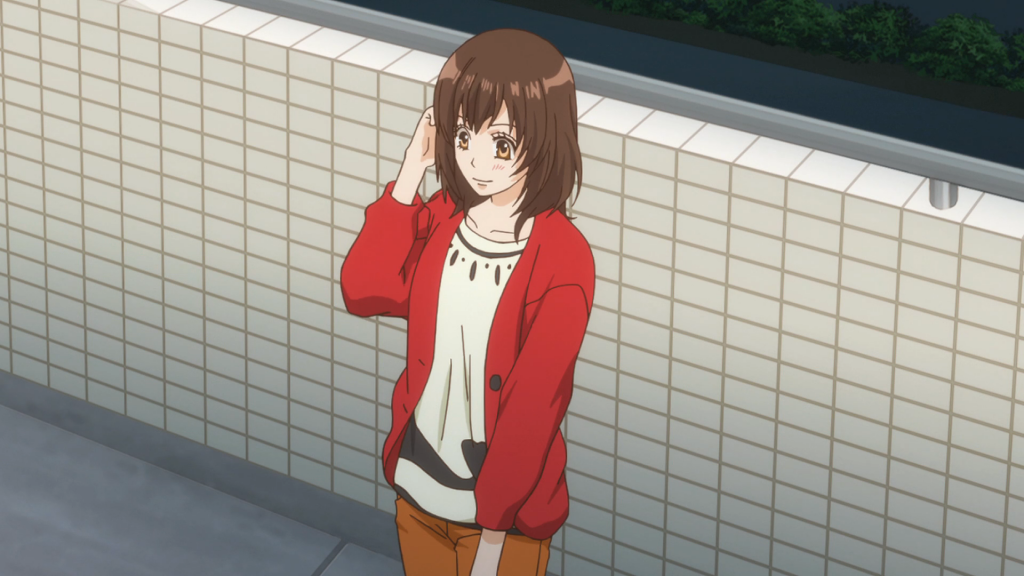 Well, I didn’t expect the actual love plot-line to start so soon into the series. I thought it would be something that gradually developed between the two characters. Obviously, I was wrong, so at the very least the show shed some of its predictability from my perspective. One must inquire as to what, exactly, Erika has found to fall in love with, though, as Sata has been nothing but twisted towards her (save for that one time he stepped in to defend her). Whatever it is, though, one thing is clear: Sata doesn’t return the feeling.

To be fair, though, the show has begun to paint a picture of Sata’s past, which helps explain why he is the way he is, and why he has no desire for love. Something has happened (as symbolized in the flashback with the crushed snowman) that has either made Sata hard-hearted to love or completely cold to the emotion. Even accepting care from Erika while he was sick seemed to be difficult for him at first.

One thing that is interesting is that Erika’s lying seems to have quickly taken a backseat in terms of plot relevance. Yes, we still see the occasional fib pop up (such as when she states that she and Sata went to the mountains during break), but these don’t seem to play much of a role in the overall plot. Considering that her lying was such a big issue (and was the basis for the entire series, basically), it is interesting that this part of her character has quickly taken a backseat.

I still think it’s pretty obvious that, eventually, Sata and Erika will be a legitimate couple. I suppose it’s not all that original that the plot seems to be moving towards the “girl fixes guy’s emotional scars” trope, either, but it is still an enjoyable show and (in this writer’s opinion) worth looking into if you like romance anime.

Then he told them many things in parables, saying: “A farmer went out to sow his seed. As he was scattering the seed, some fell along the path, and the birds came and ate it up. (Matthew 13: 3-4)

When anyone hears the message about the kingdom and does not understand it, the evil one comes and snatches away what was sown in their heart. This is the seed sown along the path. (Matthew 13: 19)

At the end of the episode, Erika works up the nerve to finally confess her love to Sata, only to be quickly turned away with (at least seemingly) her feelings changed. At face value, it seems that Sata was easily able to make her doubt that her feelings for him were real (of course, I guess it’s possible that Erika just went along with it, but only time will tell). This could be compared to the above sections from the Parable of the Sower, where Jesus describes some of those who hear the Gospel as having the message snatched away from their hearts by Satan. As He explains in verse 19, this happens because they hear the message and do not understand it. Similarly, Erika has never fallen in love with someone before, so when she confesses her love to Sata, he uses this against her to make her doubt her feelings.

This is also a good place to talk about placing too much emphasis on emotions and feelings. If our faith is based too much in how we feel in the moment, as opposed to the truth of God’s Word, then it is easy to struggle with believing we are sincere in our faith when the feelings begin to fade away. In the same way, if Erika had examined herself a little closer and found that her love for Sata was deep and rooted, then perhaps she wouldn’t have been so quickly persuaded to walk away.

Nudity/Sex/Fanservice: Tezuka is shown in a cleavage-revealing bikini; Marin is also shown in a bikini; it is implied that Sata had sex with a random woman