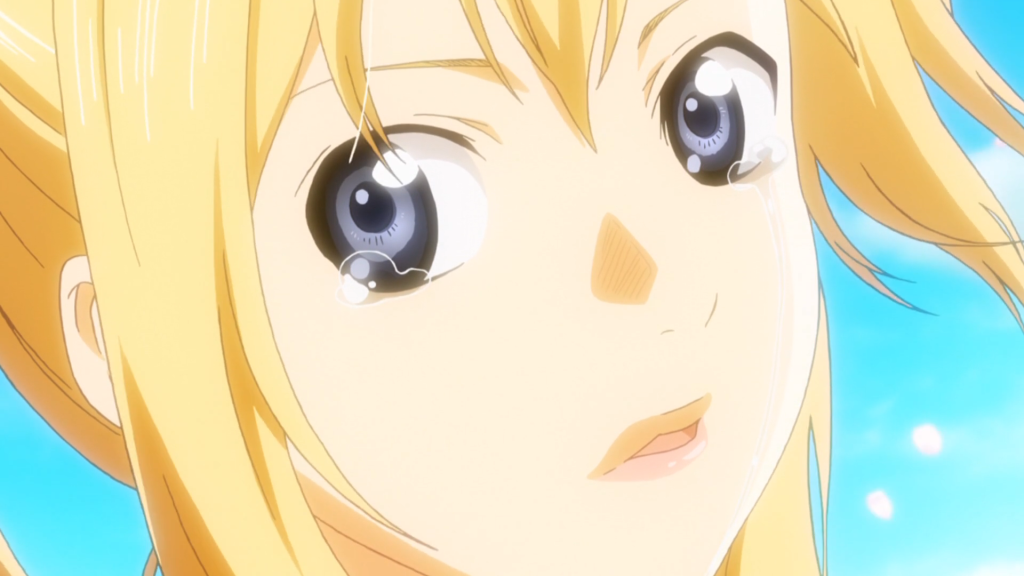 Your Lie In April is a story about a boy named Kousei Arima, a once-prodigy on the piano who has now lost his ability to hear the piano (despite having perfect hearing) and who now sees the world in monotone. Okay, I may have paid a visit to Wikipedia to summarize that. Anyway, Your Lie In April is, if nothing else, a visually appealing show. The artwork is very attractive, and though more could probably be said about it, I am no art critic!

Thankfully, the show does, in fact, deliver more than just some pretty art. While the premise of the show certainly contains the elements for a depressing story, it never really goes there. Sure, Kousei’s backstory is kind of sad, particularly in relation to his mother, but I never felt like I was dragged into depression territory. It probably helps that Kousei’s character is rounded out by his friends Tsubaki and Watari, both of whom are much more upbeat than Kousei himself.

The episode eventually introduces a fourth character, Kaori Miyazono, who is a musician (like Kousei), although she is still practicing her instrument and is an all around happier character. My super synopsis reading powers reveal that she will play a key role in turning Kousei’s world around and helping him get back into music!

Well, that’s all I really have to say about the first episode. I liked it more than I thought I would. Simply put, while I don’t dislike music-based shows, I tend to like the kind that are based around my type of music. K-On!, for example, is a personal favorite. Piano and violin? Not my cup of tea. However, it doesn’t necessarily seem like this is going to be a show based around music as much as it is the characters themselves. Of course, only time will tell, but the characters are likeable enough, and the presentation pretty enough, that I will return for the next episode.

“I hate the piano, but if I’m still clinging to it. It must be because I have nothing else. Take away the piano, and I’m empty… There’s nothing left but an ugly resonance.” – Kousei Arima

As previously mentioned in the review, Kousei was once a piano prodigy who has lost his ability to hear the piano. From the quote above, we can see that he believes that he has nothing left without the piano. In other words, it could be said that he was defined by his ability to play, and, without that ability, he has nothing and is nothing. Now, before we get too hard on poor Kousei, let’s take an inventory of ourselves. How many times are we guilty of this? I’m sure we’ve all based our worth on whether or not we “fit in,” had the “cool” stuff, or some other arbitrary standard. When we base our lives on the world, we ultimately find ourselves unfulfilled. Honestly, I’m probably the worst person to write about this, but “Therefore, if anyone is in Christ, the new creation has come: The old has gone, the new is here!” – 2 Corinthians 5:17 (NIV)

My point is this: if we are in Christ, and therefore a new creation, then we do not need to be down on ourselves because we lack some kind of skill, a possession, or anything else this world has to offer. Instead of being down on ourselves, or feeling like we have “nothing else,” we should remind ourselves that we do not have to be bound by the world’s definition of “success” because we are no longer “of” this world.

Nudity/Sex/Fanservice: The intro shows a naked girl dancing (non-descript nudity, about as detailed as a Barbie doll) from the waist up along with a boy who is at least shirtless (again, only shown waist-up); while you don’t actually see anything, a character has her dress blown up by the wind as another character tries to take her picture

Blood/Gore: A boy is shown lying on the ground with blood around his head; a baseball has blood on it; the boy has blood on his face when he sits up; a character has a line of blood coming from his nose