Review: Your Lie In April, Episode 2: Friend A 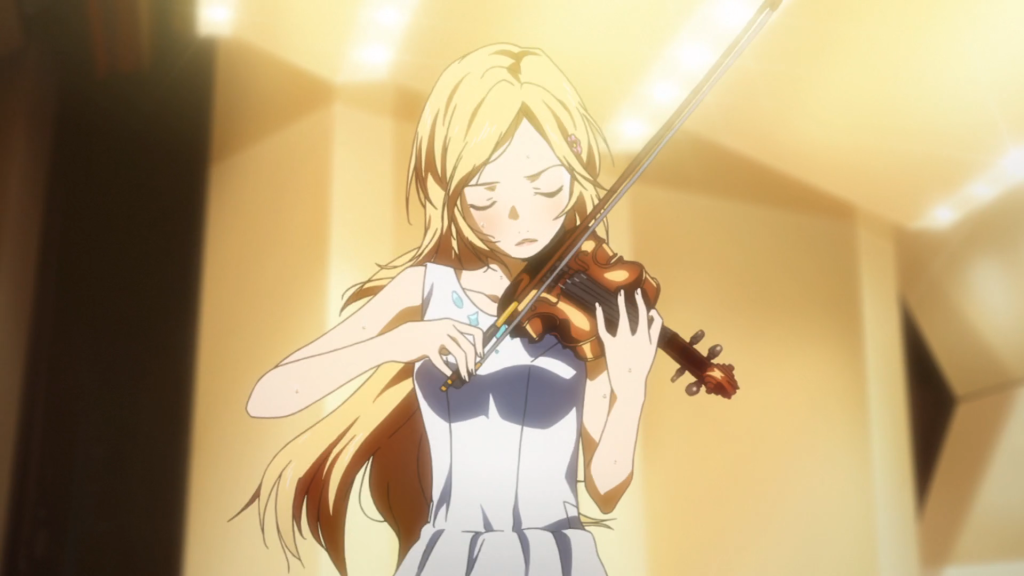 It’s interesting how an anime can take a subject I have no interest in, build a plot around it, and actually catch my attention. In this case, the subject is classical music. Call me tasteless, classless, unrefined, or whatever else you will, but classical music does not interest me in the least. Despite that, I find myself thoroughly enjoying Your Lie In April, even though the two lead characters are skilled in classical music. Perhaps it’s because the music is simply a plot device. At its heart, Your Lie In April seems to be a character-driven show, and these characters just happen to be performers of classical music.

At any rate, we get to see what’s so great about Kaori in this episode. Apparently, it’s that she’s not only a skilled violinist, but also that she thinks outside the box and is able to make a piece of music her own. We see this in her performance of the Beethoven piece that all of the contestants have to play (and we see the subsequent disapproval that such a break from the mold creates). Yes, a decent portion of this episode is spent in the concert hall, and, yes, you may learn a little something about classical music competitions (provided that the details Kousei gives is based on factual information, and not just fabricated for the story at hand). Despite that, it never really seems boring, at least not for this reviewer. I suppose if you’re not fond of this type of story, then the opposite may very well be true. In any event, adequate screen time is given to Kaori’s performance, along with actual music. We’re not just led to believe that she performed something amazing and different—we actually get to hear it. Again, I am not a fan of classical music, but I’d be a liar to say I disliked what I heard.

Other than that, we do get a little more insight into some of the other characters. Kousei is, of course, the character with the depressing past and current life crisis. What’s nice about his character, though, is that he’s not entirely defined by this. While his problems are clear and well known, he isn’t entirely a mopey, depressive, middle school boy. He certainly has his amusing moments, such as when he wakes up screaming and frustrated while surrounded by sheet music, or when he is hit in the head with a basketball that he threw himself. Basically, Kousei is a character with issues, but he doesn’t wear them on his sleeve in a “feel sorry for me” kind of way. He doesn’t whine like Shinji Ikari might.

In conclusion, this episode continues to build my interest in the show, and I think it gives hints towards the romance that is almost assured. Honestly, I’d be very surprised if, at the end of this thing, Kousei and Kaori aren’t together.

So I’m sure we’ve all heard the saying that, as Christian, we’re to be “in the world, but not of the world.” While there are certainly a ton of opinions out there about what this means, I’m sure we can all agree that, at the very least, it means we should take a different approach to things than the rest of the world. People should see a difference in how we view and approach the world. Granted, this isn’t something of our own definition, but rather God’s; our behavior should be guided by Him, not by the world or our own opinions. Kaori’s performance is kind of like this: she doesn’t simply play the Beethoven piece note for note just to win the competition. Instead, she takes her own approach to it, setting herself apart from the crowd. Sure, we could spin this and call it a rebellion against authority, but I like the positive aspect more. It shows the idea of the world having a certain expectation, but somebody taking a different path, much like we do as Christians.

Blood/Gore: A flashback shows a character with a bloody nose

Other: Kaori says something like, “Elohim, Essei, I implore you” before her performance; I don’t know what that means, though I know Elohim is a term for God; a judge calls the modification of a Beethoven song “blasphemy”