Review: Your Lie In April, Episode 3: Inside Spring 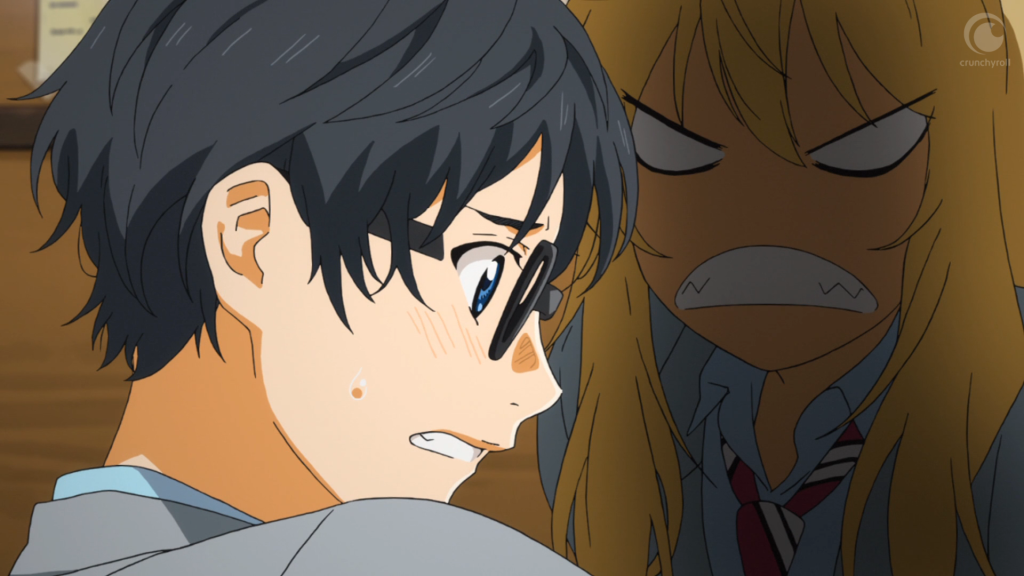 In this episode, we begin to see the budding relationship between Kousei and Kaori. Continuing from where the previous episode left off, we see the two end up at a restaurant of sorts with a piano. Inevitably, Kaori ropes Kousei into playing the piano with a couple of kids. It is here that we first see Kousei’s issue with the piano, when he basically locks up while playing. Later, he explains that, eventually, he loses the ability to hear his own playing. It seems that he is only deaf to his own playing, however, and can hear someone else playing the piano, just not himself. Somewhere along the way, Kaori decides that Kousei will be her accompanist for the next round of the competition.

Again, Your Lie In April manages to balance its drama with its comedy fairly well. Kousei’s “disability” with the piano never seems to be downplayed, but at the same time the episode never feels mired in pity or depression. In fact, parts of the episode are downright funny—specifically when Kaori and Tsubaki begin to team up and bombard Kousei with sheet music in an effort to convince him to take the role of accompanist. Now, whether Kaori’s desire to have Kousei play with her is meant to inspire Kousei, or is simply a selfish desire on Kaori’s part, is yet to be seen, but my prediction will be that it’s more of the former than the latter. After all, I think it’s kind of obvious that the series will ultimately revolve around Kousei getting a new lease on music and finding the inspiration to play again. Maybe I’ll turn out to be wrong, though. Only time will tell.

There is a parallel here in how Kaori relentlessly pursues Kousei to how God pursues His people. In this episode, Kaori decides that she wants Kousei to be her accompanist, and despite his refusal and excuses as to why he cannot accompany her during her performance, she never gives up or backs down. Her pursuit of Kousei continues throughout the episode, and if you’ve already watched the episode then you know how that ends. In Luke 15: 1-7, Jesus tells the parable of the lost sheep, in which a shepherd sets out to find his lost sheep:

Now the tax collectors and sinners were all gathering around to hear Jesus.  But the Pharisees and the teachers of the law muttered, “This man welcomes sinners and eats with them.”

Then Jesus told them this parable:  “Suppose one of you has a hundred sheep and loses one of them. Doesn’t he leave the ninety-nine in the open country and go after the lost sheep until he finds it?  And when he finds it, he joyfully puts it on his shoulders  and goes home. Then he calls his friends and neighbors together and says, ‘Rejoice with me; I have found my lost sheep.’  I tell you that in the same way there will be more rejoicing in heaven over one sinner who repents than over ninety-nine righteous persons who do not need to repent.

This episode is a good parallel, because, just as we initially run from God for whatever reasons we may personally have, Kousei also runs from Kaori. Yet, instead of giving up, God pursues His people, just as Kaori pursues Kousei. Not only that, but in this parable we see that God rejoices when He finds one of His lost sheep. To take this comparison a little further, though: Kousei runs from Kaori and essentially says that he cannot do what she is asking him to do. I wonder how many of us actually do this with God? How many of us feel that we have nothing to give or nothing to offer? 1 Corinthians 12 explains how God has distributed different gifts to different people, and how we are all vital to the Body of Christ and cannot say we do not belong because we are not this or that.