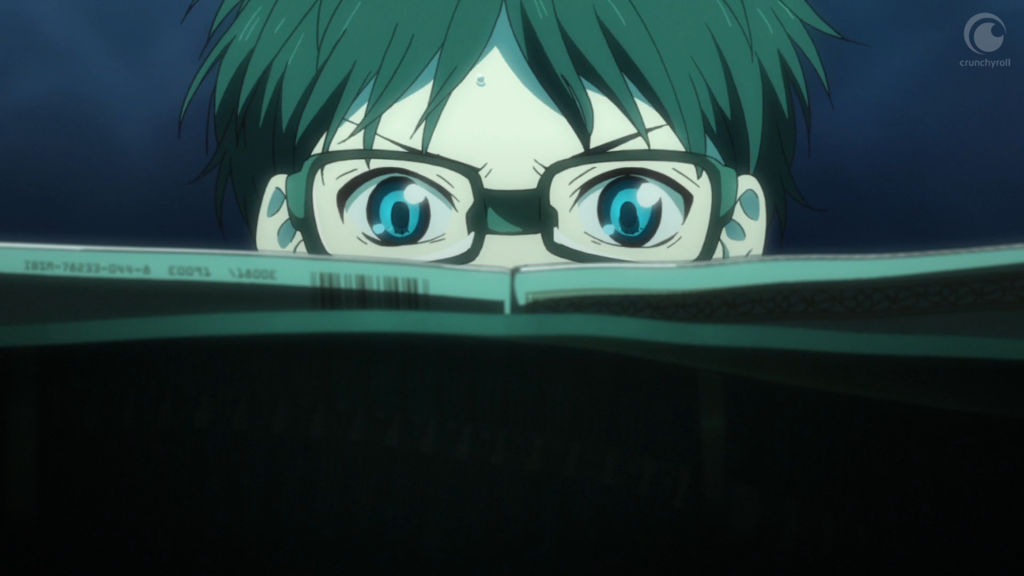 Well, Kousei has given in and is going to accompany Kaori during her recital. At the very least, I think we all knew from the get-go that somehow Kaori would get Kousei back into playing his instrument. It’s certainly happening faster than this reviewer would have thought (rather than being a series-long progression, it begins here in the fourth episode; technically in the third, if we count the point from which Kousei made his decision). In any event, Kousei is in, the contest is on, and what remains to be seen is how the contest will play out.

Again, I have to give the producers kudos for keeping this show entertaining, even to non-classical enthusiasts like myself. With a decent portion of the show dedicated to Kaori and Kousei’s performance, it’s easy to imagine one such as myself getting bored, but that didn’t happen. Of course, Kousei begins to struggle with his condition (as we might expect), and though there isn’t a lot happening outside of Kaori playing the violin and Kousei struggling to play the piano, the show somehow manages to keep the viewers’ attention.

The climax of the episode is, of course, something fans should be happy to see, and yet it’s shocking in its own right. If nothing else, it certainly earns a point for being unexpected. Who doesn’t like a surprise?

We can learn a thing or two about faith from Kaori in this episode. Kousei is broken, in the sense that he suffers from his condition with playing the piano. Kaori knows this; in fact, she’s seen it first hand. Despite all that, though, she has chosen Kousei as her partner, and even expresses confidence in his ability. What could be the source of this confidence if not faith? And what could be the source of her faith other than knowledge of what Kousei has done in the past, and, therefore, his capability playing the piano in the present?

Much like Kaori’s faith in Kousei was based on who Kousei is and what he has done, so too should our faith in Jesus be based on who He is and what He has done. Were we there to see the resurrection and to put our fingers in the nail marks, alongside Thomas? No, we were not; however, we have the accounts of the first century witnesses; we have the research that has been done since then; and we have the ministry of Christ Himself to give us confidence that Jesus is who He says He is. After all, He fulfilled numerous Old Testament prophecies, inspired a movement that does not make sense unless Jesus truly was the Messiah, and has changed the lives of countless people throughout history. Can we physically see Jesus today as the apostles did back then? No, we cannot; however, we can trust in the facts that we have about Jesus, along with the evidence we have of His work. Based on these things, we can reasonably and logically conclude that Jesus is the promised Messiah–the One who can forgive our sins and reconcile us to God–and that He is worthy of our trust and faith.

Violence: A character goes flying off of a back; Kaori headbutts Kousei

Other: Kaori does the “Elohim, Essaim” thing again, which has some kind of dark roots (information courtesy of commenter David on Christian Anime Review