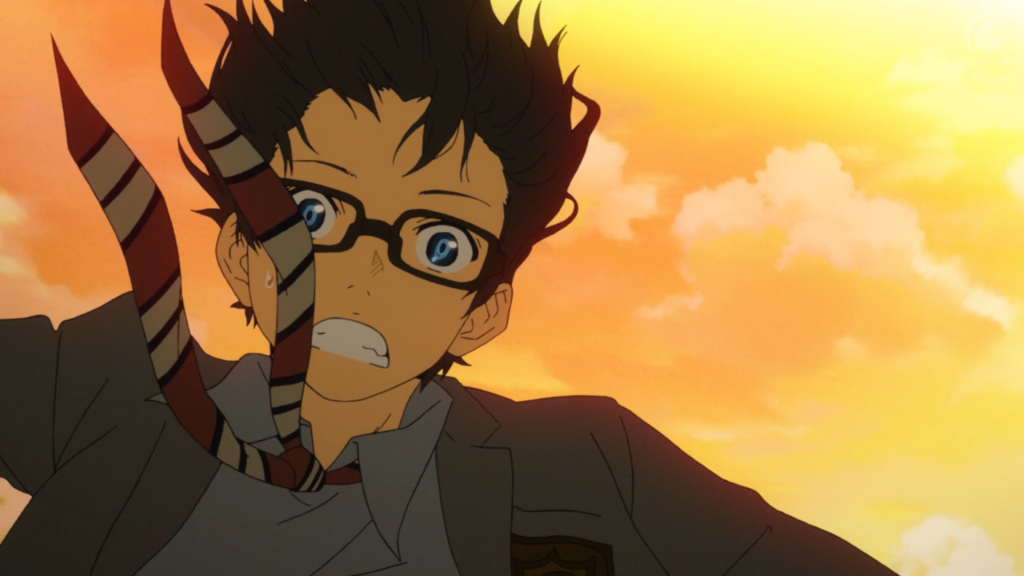 In the aftermath of the previous episode, we find that Kaori is hospitalized and Kousei is still kind of feeling down about himself. What was particularly nice about this episode is that, while it was still primarily about Kousei and Kaori, it also put some focus on Tsubaki, at least temporarily. Despite previously claiming to have no romantic feelings for Kousei, Kaori ends up being quite hesitant when a former senpai shows up and asks her out. One can’t help but wonder if this will lead into something of a love triangle later on in the series. After all, we know that Kousei is falling for Kaori (he has already admitted as much to Watari), and now it seems that Tsubaki may have feelings for Kousei. Whether Kaori’s feelings for Watari are genuine or not remains to be seen, as that may make it something of a love square? I don’t know.

What’s really nice is how the romance element is really a sub-plot here. Yes, they are middle school kids. Yes, they are falling in love. No, that’s not the focus of the show. The funny thing is that taking the romance out of the story’s primary focus almost makes it more desirable, at least in this writer’s opinion. I want to know how things are going to go, and yes, I want Kousei to end up with Kaori. While I can feel for Tsubaki (the childhood friend always gets the short end of the stick in anime relationships), Kaori and Kousei clearly have more in common. Kaori even goes out of her way to intercept Kousei again in this episode. What that means is still shrouded in mystery, especially since, prior to this point, we do see Kaori and Watari together.

Oh, and Kaori also deserves credit for saying something in this episode that every teen and pre-teen drama ever created can learn from: “we’re only fourteen.” Despite all of the drama, despite all of the hopes and dreams, despite all of the emotions, she realizes that they are ONLY FOURTEEN and that life doesn’t have to be decided right there and then. They have time to try, fail, and move on. That, if nothing else, is a nice refresher from the typical, “My life is going to end” attitude that seems to hover over the teenage populace (or at least their media).

In this passage, Paul essentially encourages us to put our gifts to use for their intended purpose. The parallel in this episode is that Kousei comments that the piano is all there is to him, and he seems none too happy about it. Just as Kousei feels that there is nothing more to him than the piano, so we Christians may feel that there is nothing more to us than whatever skill or talent we have, and we may even lament or get jealous that somebody else has something that we perceive to be greater than us. Some examples:

“Well sure, I serve well enough, but I can’t sing like she does! I’ll never be on the worship team!”

“Okay, so I teach kids in Sunday school, but look at how he evangelizes! I’m teaching Noah’s ark with felt boards while he’s bringing hundreds of people to Christ a week!”

Instead of seeing what gifts we have and then using them, we lament that our gifts aren’t “as good” as the next guy’s. Granted, Kousei can be given some slack here, since he does struggle with the one thing that he perceives he has, but the point is that we shouldn’t be down on ourselves. Paul doesn’t say in the above passage, “If your gift is serving, then serve, but know that you’re not worth as much as the guy prophesying.” No, he simply says (paraphrased), “Whatever you have, use it!” That’s it. Instead of being like Kousei and lamenting, “Well, all there is to me is x or y,” let us instead say, “This is what I have, so I will put it to good use for God!” That second one sure sounds a lot more promising, doesn’t it?

Nudity/Sex/Fanservice: You see Kaori’s bare back as a nurse is wiping her down

Blood/Gore: Kousei and Watari both have blood pooling under their heads