Review: Your Lie In April, Episode 7: The Shadows Whisper 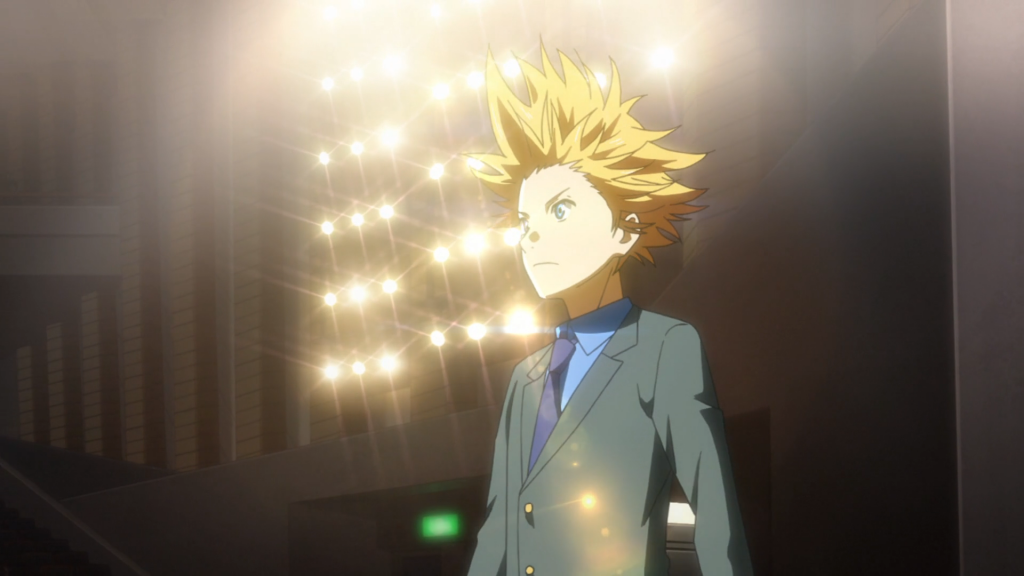 Kousei’s piano contest is looming ever closer, and he’s about as prepared as he can be considering the fact that he can’t even hear the notes he will be playing. As the episode moves us closer to the actual competition, we get introduced to more information about Kousei, including his childhood cat. A couple shots in the episode show Kousei sitting on a swing, talking to a cat, which is presumably representative of the cat from his childhood. It should be noted that these are dream sequences or something similar, and they provide a deeper look inside Kousei’s psyche, although it didn’t seem all that ground-breaking.

Of course, Kaori is there to lend an ear. Which direction their relationship is supposed to be moving towards is still a mystery, although Kousei definitely seems to confide in her more than his long-time friends (and we already know his feelings towards her). Scenes like this certainly lend hope to a romantic relationship, but only time will tell. For now, she proves to be a good (if not spastic) friend. On the other side of the spectrum, we have Takeshi and Emi, Kousei’s newly introduced rivals. The presence of said rivals isn’t surprising—it would be quite dull and unrealistic if the great piano prodigy did not have at least one—and they certainly have a history with Kousei (even if he doesn’t remember them). So now the stage is set. Will Kousei come out victorious? Or will he fall to one of these two contenders? Only time will tell, so let’s watch and see!

Romans 12:19 – Do not take revenge, my dear friends, but leave room for God’s wrath, for it is written: “It is mine to avenge; I will repay,” says the Lord.

Let’s talk about vengeance, and what it can cost us. Near the end of the episode, we see that Takeshi had the opportunity to travel to Germany to perform so that he could enter the same contest as Kousei and ultimately compete against him. Takeshi’s seeming desire for vengeance (even if Kousei never truly wronged him… perhaps vengeance isn’t even the best term to use here, but you get the point) has cost him a great opportunity that could ultimately advance his standing as a piano player.

Before we get too down on Takeshi, though, let’s take a look at ourselves. Have we ever acted out of vengeance? If we’re honest with ourselves, the answer is most likely yes, and that vengeance has probably cost us. The degree of cost may differ—for example, taking physical vengeance may have personal as well as legal consequences as opposed to something less severe—but the reality is that we probably lost or damaged something. Relationships, reputation, and perhaps our own peace are some things that may have been impacted. If someone has wronged us (and let’s make sure it is a true wrong and not just our perception), then we are not to take vengeance or hold grudges. Instead, we should reflect back to this verse from Romans and remember that vengeance is in God’s hands, not ours.

(For the record: I wrote this after seeing the next two episodes, so I know more about Takeshi’s feelings now. I still thought this was a good point, and it is what I thought of upon initially viewing this episode, so I still went with the perspective.)

Violence: Kaori kicks Kousei several times; Kaori headbutts Kousei in the back; a scene shows Takeshi shooting a beam from his mouth and scorching a man’s face (this is metaphorical, of course)

Blood/Gore: A flashback shows a young Kousei with blood on his hand