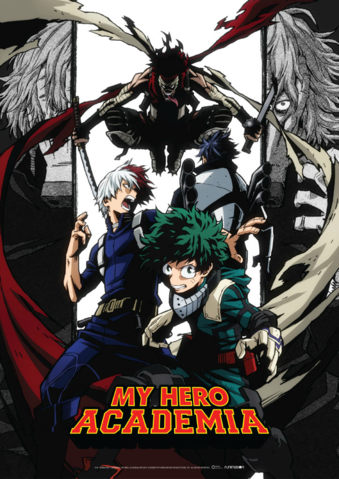 My Hero Academia (Boku no Hero Academia) has seen no shortage of popularity since it Texas Smash’d its way into the anime limelight back in April 2016 (read our review here). The second season has given no indication of stunting any of that momentum—instead, it seems interested only in outperforming itself. Introducing new layers of narrative, symbolism, animation, and a whole host of additional characters, Izuku Midoriya and the rest of class 1-A are going to need to level up their hero game, lest they fall behind their aspiring peers and the ever-growing presence of malevolent forces that prey in the shadows.

Violence: Cartoon violence of various grades. On one level many of the things that happen are elemental—fire blasts, ice shards, etc.—and do no meaningful harm aside from environmental damage. On another level, characters are not spared from legitimate, lasting injuries in the cases where it would be unbelievable otherwise. One character breaks his arms and fingers constantly, another character cuts people with a sword, monsters burn to death, people are hurled into buildings, somebody sustains an impalement permanently robbing them of feeling in their legs, and it is implied off-screen that a mother throws boiling water on her child’s face. There’s also evidence of ongoing domestic abuse both towards a wife and that same child.

Sexual Content: Basically any scene showcasing the character of Mineta, who perpetuates nearly all misconduct found in the series. He tries to peek on girls in a locker room, he convinces his female classmates to be cheerleaders specifically to objectify them, and he either gropes, tries to grope, or talks about groping females in at least every other scene he’s in. It only marginally helps that he’s punished for these things. Aside from him, the character of Midnight is deliberately made to be lascivious. While being fully clothed, Midnight’s weapon of choice is a whip, and her outfit is meant to vaguely resemble bondage.

Other Negative Themes: No concerning material. 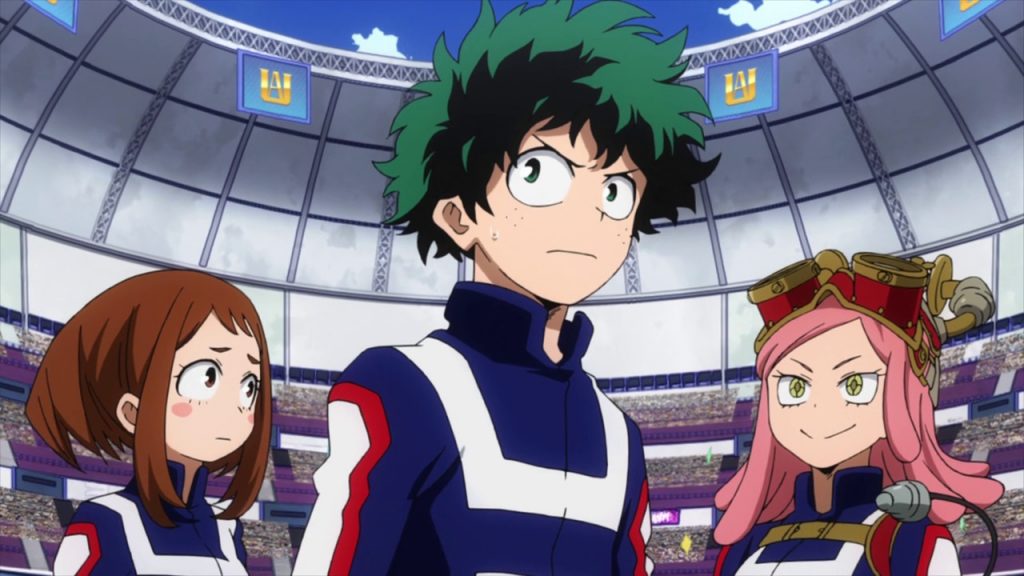 Izuku “Deku” Midoriya is back and ready to prove himself worthy of being successor to One For All, a legendary quirk passed down to him by the even more legendary hero, All-Might. Coming off the coattails of a villain ambush in Season 1’s finale, the students of 1-A are now being hurled into something perhaps even more terrifying: a tournament arc.

And by terrifying I obviously mean awesome. 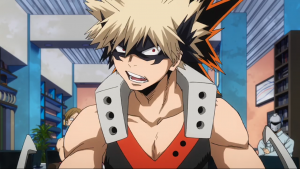 There’s really not much I can capture about this show which hasn’t been said already—and at greater depth—but I’ll see what I can do. Season 2 of MHA is definitely cranking it up a notch on the action compared to the first season. U.A. High School has its annual sports festival, outfitted in activities which can only be tackled via creative utilization of the students’ various quirks. First comes the race, then the calvary battle, and finally the tournament. In each of these, the students must push their ingenuity, test their resolve, and in some cases, wage war against the status quo of their friendships and family lives. As sports and competition are known to do, each of these tests lay bare the deeper emotions and driving motivations of the participants involved, allowing for quick growth of characters and thus, character relationships. Competition is also a good narrative tool for “powering up” characters for future story-lines, demonstrating not only significance within the arc, but the overall plot of the series.

My Hero Academia performed its sports festival arc with lethal gusto. While it may not have included anything particularly unique, as a vehicle for change it was executed masterfully. The strategies employed helped flesh out our cast from the first season, while introducing wild card characters in exhilarating ways and opening doors for histories to become known. All of this while providing commentary on the state of the hero society and the social politicking which resides within the walls of the My Hero Academia universe. 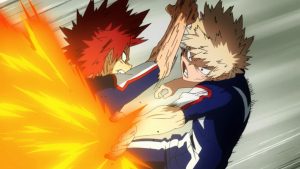 But the sports festival is only one half of the narrative for Season 2. Following this are the events surrounding the Hero Killer: Stain, which opens up a multitude of internal character conflicts, external character threats, grim world-building implications, and a magnitude of motivating philosophies hitherto unseen in the series. Chasing that, we have the Final Exams arc, where students must work in tandem against the teachers of U.A. who have been raising them to this point.

There is a daunting amount of information and development contained within the 25 episodes which make up My Hero Academia’s second season, moreso than is usually found in the shonen genre. Things go bigger, wider, and deeper all at the same time, and its for these reasons the My Hero Academia cast and story has swelled into the juggernaut that it has become today.

But the tides of praise which have found this series don’t come explicitly from the story. There are things to be mentioned regarding its production, as well. 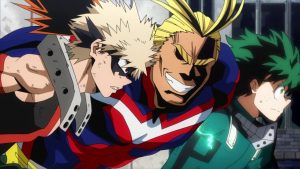 Unlike other long-running series of the same cloth, there was an early directive decision that My Hero Academia would not run week-by-week indefinitely. In doing this, the series benefits in many ways. Not only does this allow the creative team behind the anime to pour some extra consideration and soul into each episode, but it avoids the plague which inevitably comes from all series which suffer no-break schedules: fillers. My Hero Academia Season 2 has a single filler episode, and it’s actually fantastic—the product of a good idea, rather than desperate time-filling gimmicks. The director wants to remain as true to the source material as possible, and I can only believe this has helped its popularity in the long run.

On top of this, the music and animation have each gone further beyond in their own separate ways.

The soundtrack, helmed by Yuki Hayashi, revisits old tracks and introduces plenty of new ones to the show’s expanding sonic palette. Speak not of the two masterful openings in “Peace Sign” and “Sora ni Utaeba,” which are both beloved enough by fans to have a veritable ocean of covers made for each of them. 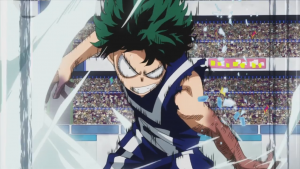 Yutaka Nakamura still acts as animation director and occasional key animator (for when things need a little plus ultra flare), so don’t expect any dips in quality on this front, either. There are many standout moments of animation sprinkled throughout the season, each seemingly better than the last.

In total, My Hero Academia had a tight wrap on its momentum coming out of Season 1 and the second season only rode that to greater heights. With the third season now airing, there hasn’t been a more exciting time to jump on the bandwagon, and if that’s a phrase you don’t like to associate yourself with, I implore you to make an exception.

This bandwagon may surprise you.

The second season of My Hero Academia diligently rides the momentum of its first. Bigger, wider, and deeper than ever, this anime phenomenon shows no hints of idling or slowing down, as it climbs for ever-greater heights.