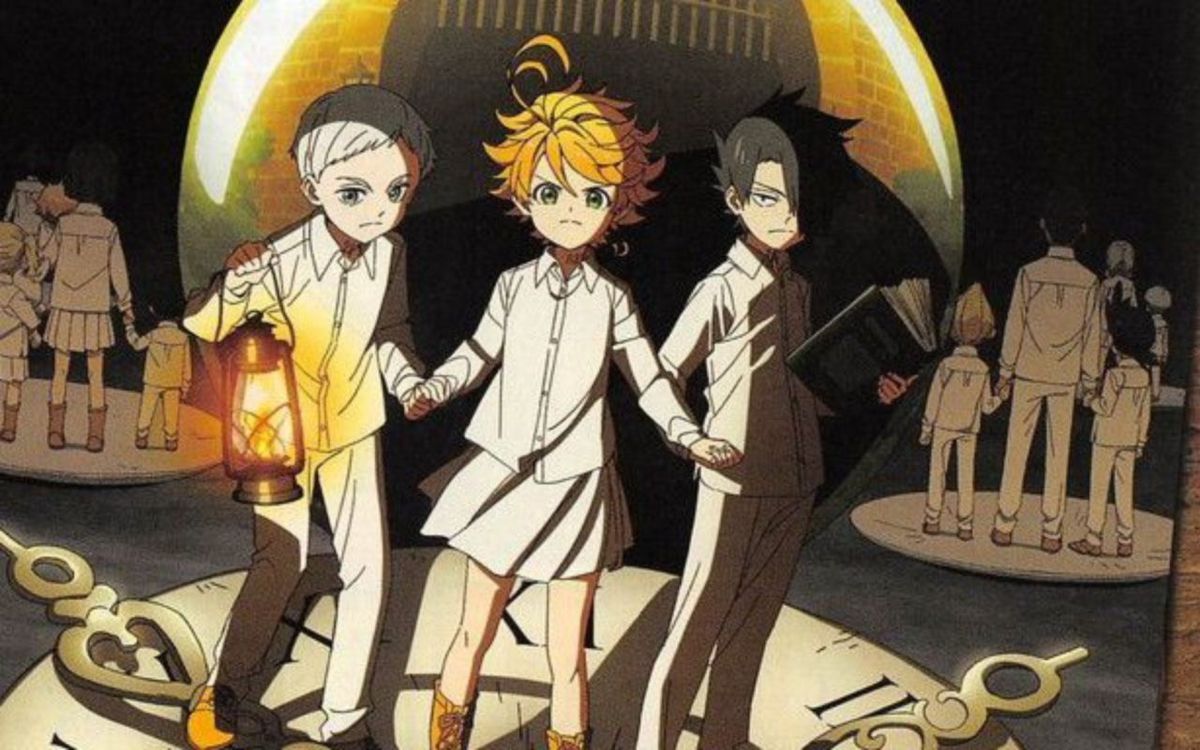 Going into the 2019 winter season, there were only a handful of series I was personally excited to watch. Chiefly among these was the unconventional Shonen Jump hit, The Promised Neverland, which I’d started reading a couple years earlier. I walked in with a meteoric opinion of the series, and so did what I could to temper my lens on the first episode so that my bias didn’t interfere. In the end, it both met and failed my expectations.

The Promised Neverland follows Emma, Norman, and Ray, three hyper-intelligent children who live at Grace Field House with the rest of their massive foster family. Under the guidance and protection of a woman they simply refer to as “Mom,” they wait out the days until they are adopted. Life in Grace Field House is peaceful, whimsical, and a little bit bizarre. When they aren’t playing tag in the House’s giant court, or making a family meal together, they are taking intensely elaborate, standardized tests meant to measure their growing intelligence.

If that last part seemed a little out of line with the rest of the examples, don’t worry, I didn’t even mention the Brave New World vibes it gives off. There’s definitely more to the love and tranquility of Grace Field than meets the eye, and when one of the children is adopted, Emma and Norman learn why they never hear from their brothers and sisters ever again.

Grace Field House is not a foster home. It is a farm.

That’s all the further I will go with the narrative. It aims for the jugular, so it’s best to experience the true nature of the story first-hand.

But I have mixed feelings on this first episode. I’d immediately reread the first chapter before starting, so both were fresh in my head. I’ll start with the good.

The music is great. The opening cinematic is ominous and foreshadows a lot of the mystery and dread we will come to expect after the first episode’s twist ending. Closely tied to music, the sound engineering (and corresponding editing) is one of the strongest suits for the series. There are at least two, screeching hard-cuts that ramp up the tension in ghastly ways, leaving us stricken with fear and intrigue.

The animation was servicable, but nothing to write home about. I don’t have much to say on the matter, as I wasn’t expecting tremendous animation quality going in, so if it keeps the status quo, I’ll be satisfied.

Overall, the episode was good, and this is reflected in most of the anime-only fans who have watched it. The first episode has a good reputation online. My greatest issue with it is that it made the super-genius children sound dumb. For starters, a scene is added at the very beginning which unloads a bunch of timeline and character identification information, which isn’t needed. It’s easy enough to figure out who is who pretty quickly, without the storyboard writers holding our hands. Unfortunately this makes the characters look underwhelming in their intelligence, as they address details they know so inherently that it should never be a point of discussion. Worse still is that a while later, somebody explains to Emma what “strategy” means, and does so using a chess anecdote. Emma behaves like she’d never thought of this before.

But again, Emma is a beyond-intelligent eleven-year-old. We see it in her test scores. Normal kids that age know what strategy means. Even more than that, she is a strategist.

If the anime can fix this one glaring flaw of watering down its characters, I think it will improve immensely. I have some other concerns, but they’re more nitpicks than anything, and easily forgivable if this crucial detail is modified.

I am, however, a little nervous about the 12-episode serialization going forward. If they continue at the pace of this first episode, the series won’t even finish the first complete arc of the story in that time. I hope this does not create a problem.

Spiritual Content: There are a race of creatures known as “demons.” Whether this is a religious term or a general catch-all for their monstrous nature remains to be seen, but is likely the latter.

Violence: No on-screen violence, but there is implied murder of a child, with us seeing the horrifying (though, not bloody) aftermath.

Language/Crude Humor: None in the Crunchy Roll/VRV translation (subbed), though I doubt that’s likely to last considering the tone of the series.

Other Negative Themes: General sense of apprehension, disturbing imagery, and ominous dark undertones which hint at an evil hidden beneath the setting’s perceived reality. The sound design is used to startling efficiency.