Uraraka and the Will of God

We all remember when we first met, Urararaka Ochako. She was the girl that saved Izuku “Deku” Midoriya from falling on his first day of school. She was that girl that was down to earth even though her superpowers weren’t. During her first year at UA High, we learned so much about her. Then one day, she was asked the question, “Uraraka, why did you decide to become a hero?”(S2, E14) Her answer was simple yet surprising. She chose to become a hero for the money. It’s not very admirable when you take it at face value, but there was much behind her answer that was kept secret. Later on, she reveals that her family owns a construction company. Initially, she wanted to help her parents with their company, but her father refused. Not because of pride but because of selflessness; he wanted his daughter to chase after what she wanted. After Uraraka reminisces about what her father had told her, she declares that she will become a pro so her parents can have an “easy life.” Eight episodes later, Uraraka is the center of attention, but she is in the midst of Katsuki Bakugo. Season 2, Episode 22: “Bakugo VS Uraraka.” 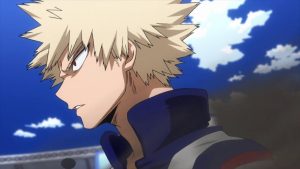 Katsuki Bakugo… We all know him as an extreme hot head. He is quick and strategic. He has powerful close-range attacks and terrifying long-range attacks. In comparison to Bakugo, we know that Uraraka is at a considerable disadvantage, yet we watched in angst to see the best for Uraraka. Attack after attack, she gets sprayed with flames and broken concrete. Unbeknownst to everyone, Uraraka had a plan that was over our heads, literally! Before the smoke could clear, debris began to fall from the sky when she released all that she had touched. She raced towards Bakugo for one last attack until Bakugo released a blast so fierce; it almost blew Uraraka outside of the arena. She thought to herself: I put everything I could into that, but it wasn’t good enough.

As she struggled to lift herself up, she turns and faints. She crawls to fight her weakness, but she gives up. She can’t go on, and it seems as though all her hard work was for nothing. It wasn’t good enough.

After the match, Uraraka is in the waiting room. She receives a call from her father, and he’s ecstatic! She’s broken. Although she is in a rush to become a hero to help her parents, her father nurtured her not to rush. Her heart and her desire show her father, and us, that she will become a “kind and caring hero.”

Just as in life, our plans will not always go our way. It doesn’t matter how noble our pursuit is. When we tell God, “let your will be done,” we are submitting everything to God. This includes plans we thought were best for ourselves.

Proverbs 16:9 says, “A man’s heart plans his ways, but the Lord directs his steps.” If we can reflect off of Uraraka, her heart had planned a beautiful thing, but God did not allow her plan to occur.

It’s not because her plans weren’t good. It’s because God’s plan was better. We may never know why God permits certain things to happen. It could be possible that God will one day reveal it, but it’s also possible that He may not. Whether He does or not is not the point in this matter. What matters when these things happen is our response to God: will we trust God even if we may never know why?

Jeremiah 29:11, “For I know the plans I have for you,” declares the Lord, “plans to prosper you and not to harm you, plans to give you a future and a hope.”

When our plans don’t go our way, it’s okay to cry. Just like Uraraka, our character is shown when we are broken. Don’t think that when your plans fail, it means you’re outside of the will of God; on the contrary; you are in the will of God. In Jeremiah 29:11, we see that God has a plan. He never fully describes the plan, but He assures us that His plan will prosper you; it will not hurt you, it has a definite future, and it gives an unshakeable hope. He spoke to the Israelites in this manner because they didn’t need to know what God will do; they just had to trust He will do it. 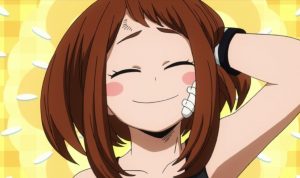 Ultimately, in life, we will never be able to change the things which have passed. God never intended for us to be able to do such things. When Izuku approached Uraraka, she said: “Even if you’ve lost, you always keep looking ahead to what’s next.” Sometimes leaving the place, we thought we’d go to is necessary for our walk with God. Even Paul was denied to go to Asia when he wanted to go, but it didn’t mean he wouldn’t go at all. It just wasn’t his time yet.

Trust God in all your circumstances. His plans for you will always be good.