Greetings geeks far and wide! Welcome to this month’s anime collaboration article, where our swashbucklin’ crew of otaku pirates tackle new waters. That is, the uncertain ocean of possibilities for which video games might make good anime if properly adapted. Each of the GUG skallywags (you can’t stop a pirate metaphor) has provided their take on this below, in an attempt to find the proverbial treasure chest. Are we out of our nautical depth? Can we sing a shanty? Has this bad joke gone too far?

I want to talk about three different games for my entry, so I’ll do what I can to keep them appropriately succinct. I compiled a laundry list of possibilities, but I’m doing what I can to narrow it down to something feasible. Before cracking the bedrock of the topic, I’d like to make an honorable mention out of Mega Man. There was an old (bad) anime for the X iteration of this character which has a lost potential. Otherwise, I could see a studio like Kinema Citrus or Bones taking a shot at Mega Man Legends. It wouldn’t heal the Megaman Legends 3-shaped hole in my heart, but it’s something. 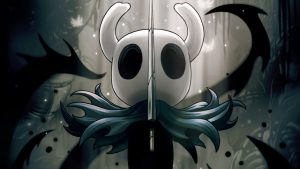 1. Hollow Knight. This is the entry which leans hardest into my recency bias. I love this game. I’ve loved it since I first played it after it released on Steam, and I love it even more on the Switch now that it’s been patched to perfection and all the DLC have released. Hollow Knight plays on some of the same elements which turned Made in Abyss into my favorite anime of last year—subterranean adventuring, layered narrative, epic combat. But most of all, this is a heavily tonal game. From the unique art style (which could be replicated by the right creative team) to the melancholic soundtrack, it distinguishes itself from its contemporaries. I think in the current media climate, this is one of, if not the most important trait a game/anime can have. With the over-saturation of new media coming in on the daily, those which stand out are the ones which feel different—something only accomplished with a mastery of tone.

2. League of Legends. Spitting entirely in the face of my last point, League of Legends, from a broad view, has almost no tone at all. The gallery of characters is so vast that to continue making interesting designs, the developers have dipped their feet into just about every fantasy genre and sub-genre imaginable, creating a cocktail of stories that only work as a game which doesn’t focus on narrative. But, that would only be a problem if the adaptation was trying to account for the entire game. If instead an anime focused on a handful of related characters, or a central location in the established lore, this franchise is suddenly ripe with opportunity. I would watch the ever-loving heck out of an anime which focused on Jinx and Vi, or something which explored the cast and political climate of the city-state of Bilgewater. The writers of this series have put intense care and consideration into the character-by-character stories which exist in their world, with each new creation being more formidable than the last. 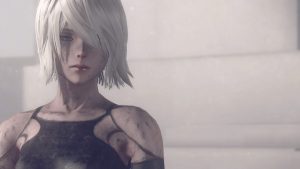 3. Nier: Automata. Frankly, I’m surprised this hasn’t happened yet. From style, to theme, to the anime storytelling tropes employed, this game might as well already be an anime. And if it does eventually become one, it’ll be an anime of the highest caliber, since it brings all of the best parts of the medium and drags along very little of the nonsense. I would not dare to try and summarize the depth and stature of Nier: Automata, it’s many philosophical applications, or its vast, uncompromising world. Others have gone before me and done a much better job. Still, it’s worth noting that with everything this game tried to accomplish and the accolades which followed, there is little argument that an anime adaptation wouldn’t at least be worth an attempt. You know, as long as it kept that unbelievable soundtrack.

The first game I can think would be ripe for an anime is Fire Emblem. Not only would it already have the art style, but there are plenty of stories to adapt. Fire Emblem has so many video games they could pull a story from, though I feel Awakening would be the most obvious choice due to its popularity. This franchise has plenty of political drama for great narrative and battles that would make for great action. My personal pick would be to make it based on the Game Boy Advance game. 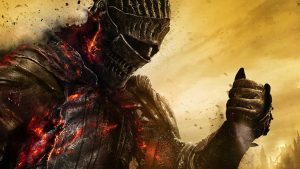 The second game I would want to see is Dark Souls. The lore of those games is incredibly deep, and I would love to see some of that explored in animation. My vision for the art style is something of a mix between Vampire Hunter D and Berserk. You get the medieval setting, along with the gothic-horror theme that distinguishes it from other games. The player is also not completely alone. Aside from deadly enemies and large bosses, there are plenty of NPC’s that could appear in the anime. I would love to see our boy Solaire praise the sun in anime form.

If I had a quarter for every spare moment I spent daydreaming about potential video game-to-anime adaptations… well… I’ll spare you my annual income tax calculations.

With top-trending anime series becoming more and more reliant upon sequential seasons, spin-offs, and adaptations, the focus has slowly turned to video games as a source of inspiration. The results have ranged from admirable to so-mediocre-it-made-me-break-out-the-video-game-instead… able. Of all vying contenders, I believe these two digital worlds should be at the top of any studio’s consideration list:

The Fire Emblem series has been falling further and further into anime tropes, with its most recent entries featuring yandere archetypes, multi-hued stab-happies, and lolicon marriage. And it’s partially for that reason, and partially because of favorite-game-ever bias, that I’d prefer to see Fire Emblem: Path of Radiance and Fire Emblem: Radiant Dawn (collectively known as the Tellius Saga) get the anime treatment instead, despite what sales-per-unit might suggest.

The Tellius Saga utilizes a familiar, anime-esque art style (motion-capture CGI, a la Polygon Pictures), would bring a classically fresh approach to the trope-riddled medium, and features a vibrant cast of heroes and villains across a complex morality spectrum. Even the political conflict harnesses interpersonal stakes, friendships, betrayals, social commentary, and plot twists in order to keep the methodical world-building engaging. Fun fact: Due to its tactical gameplay and award-winning storytelling, Path of Radiance was a nominee for being included in the The Art of Video Games Smithsonian American Art Museum.

What are you waiting for Nintendo? (Don’t think we’ve missed your experimentation with anime!)

Despite being two consoles old, Xenoblade Chronicles still sells for more than its original market price. Why? The answer lies somewhere between its vast open world (recently trumped only by Breath of the Wild), endearing (meme-worthy) accents, 500+ hour replay value, award-winning composer, diverse playable characters, fast-paced JPRG combat, and an engaging story that lays out pulse-pounding stakes from the moment of its first tragic casualty.

With the release of Smash Bros. Wii U, Shulk became a household name in the gaming community, and the Xenoblade fandom has only grown in numbers and prestige with subsequent titles. The original Japanese version of the game featured a recognizable cast that would translate seamlessly into an anime adaptation, including Shintaro Asanuma (Tokyo Ghoul), Ryo Horikawa (Dragon Ball Z), Akeno Watanabe (Attack on Titan), and Eri Nakao (Fate/Stay Night). And while Xenoblade Chronicles favors cultural consistency over trope checkboxes, it still pays homage to enough familiar storytelling mainstays to be inviting for both otaku and fantasy-fanatics—including a rotund fuzzball who may be the best incarnation of the animal sidekick I’ve ever enjoyed.