I have to admit, I’ve never heard of the Louisiana Rougarou outside of a couple episodes of Supernatural. My only knowledge of the creature is that being a Rougarou means a person gets so hungry that they end up eating people. Yummy! (Geeks Under Grace does not condone cannibalism. That’s how Wendigos are made.)

It wasn’t until I decided to try to find something to use as a wolfos for my Link Figma figure to do some toy photography with. Surprisingly, finding a human-canine hybrid without a ripped shirt and pants is nearly impossible! The only options were to pay for a Doctor Who werewolf figure which looked a bit more, um, nude than I’d like. 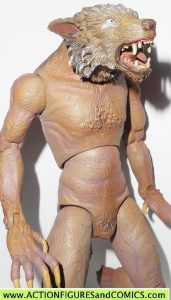 Look, I know I just complained about werewolves almost always having ripped clothing… but dude… Put some pants on!

Then in the far depths of amazon and eBay lurked the Rougarou… for $60 to $100 a pop! Uh, no thank you! I noped that option and decided to just wait, completely forgetting about what I just saw.

That is, until one day I was on the search again. Werewolf, werewolf, pants, pant, hairless mole rat werewolf thing… The same line up. Then I found this Rougarou again and decided to check out the maker’s website, Creatureplica.com. Lo and behold! They had this guy for a third of the price! I had some extra birthday money (after buying a few Spider-Man Lizards (I might have a problem with anthropomorphic creatures) for pretty cheap), so I decided to buy it, which lead me to research this particular cryptid.I tend to have a soft spot for things that make me have to do research.

Since the figure is based on a cryptid, I’m going to have to say ¯\_(ツ)_/¯. Although, the Audubon zoo in New Orleans does have a possible depiction of the creature and we’re going to call it canon. 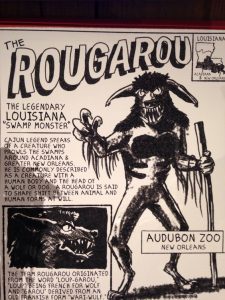 Sign of the Rougarou at he Audubon Zoo in New Orleans 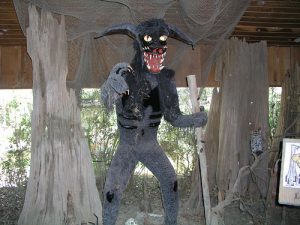 Not to be rude to the original artist, but I’m going to say Creatureplica’s take is a major improvement. 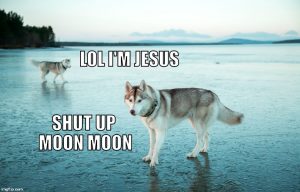 The Rougarou/Rugaru/Loup Garou comes from the French words Loup meaning wolf, and Garou meaning werewolf. So, basically the Rougarou means “werewolf wolf.” Let’s just agree to keep calling this cryptid by it’s much cooler name, the Rougarou. It’d be like calling it Moon Moon.

The history of the Rougarou is almost as muddy as the bayou waters this creature is said to roam. It is said that this creature goes after those who wonder the woods late at night, and Catholics who break Lent. In fact, if you break Lent seven times in seven years, you’ll become the beast with an insatiable appetite for meat. Some say the Rougarou is a poor soul that has been cursed by a witch. Others claim you can become one if you are bit by one (y’know, basic werewolf rules), or by seeing it. Or even just by talking about seeing one before a year and a day after seeing it. But since this is text, I should be fine, right? 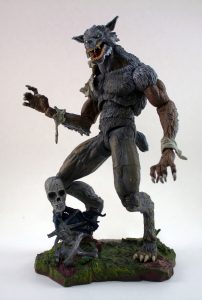 This figure boasts 23 points of articulation. Going from head-to-toe; both ears can rotate a full 360° around, but don’t move up or down much. The toothy jaw opens a good amount, almost wide enough to fit another figure’s head! Speaking of cranium cases, the Rougarou’s head is on a ball peg; able to go all the way around, look down almost all the way, and up enough just to were it looks forward.

The arms rotate a full 360°, but can only go up about 45°; but, of course, there are ways to cheat this if you don’t mind rotating to where the shoulder is in the arm pit. Elbows are single ratchet joints and can bend to a good 90°. Wrists swivel all the way around, hands move up and down. 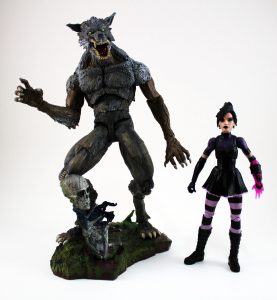 Now for the one part that confuses me; it has it has a diaphragm swivel and a waist swivel. Usually a diaphragm will give a side-to-side and/or forward and back movement, but not in this case. Or, if it does move, it’s so stiff that I’m afraid of breaking it. Don’t get me wrong, I am a huge fan of more articulation, but only when it makes sense.

The hips are a two-stage type that have an up-and-down and an in-and-out mechanism separately. Two-stage joints usually look gross to me, but on this figure, they actually don’t look that bad. Sure, You’ll have a pin at the top of the leg, but at least it blends in pretty well. It has mid-though swivel, which helps with some posing. The knees have a ratchet and can go from being straight-legged to fold all the way in. The …ankle (?) can go from being almost straight to bend nearly 90°. The feet allow for only two or three clicks, so not a whole lot of range there; mostly prohibited by the fur detail on the back. 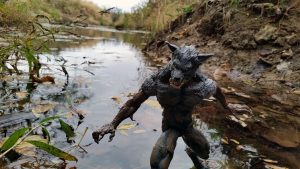 The Rougarou does not have ankle pivot, which is a big shame because it makes the figure pretty difficult to stand without using the base. It can e done, but with the top-heaviness of the figure, the stand is nearly a necessity.

I look at this figure as someone who likes to place action figures into dynamic poses, so I almost hate to do this to an otherwise nearly perfect figure, but in all fairness, I must be a little picky. From biggest to nit-picky; the biggy being lack of ankle pivot. I tried to take this guy outside, but since he’s not able to stand on uneven terrain, it makes photo shoots difficult. I used his base, but his top-heaviness made him fall over several times.

Second biggest is the head articulation. I keep wanting to pose the Rougarou with its body down and head up, but the fur in the back of the head keeps it from doing so. 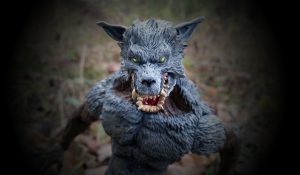 Just look at those eyes!

The diaphragm should do more than just turn. I wish it could pivot from side-to-side and move forward and back.

The shoulders; I love the detail on them, but whenever I move them, I can feel them rubbing against the fur detail on the shoulder socket and it makes me cringe. I fear that, if I were to move the shoulders too often, I’ll end up getting some joint rub issues, maybe end up wearing an unsightly groove into the shoulder.

It seems a little weird not to have the tail move when the ears do; though, to be fair, most people display their figure where they can see the front and not the back, so I can understand not making the back end a big deal.

One last thing; my Rougarou has a bit of eye paint off to the side on its face. Barely noticeable, just a nit-pick. 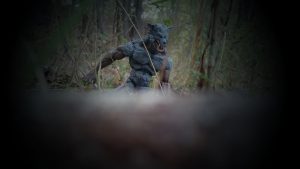 You can hide, but he’ll probably sniff you out anyway.

I am in love with the sculpt and the way the paint was handled. I’m so used to the peg-warmers seen at Walmart and the like, that it’s so nice to see premium figure created with love. I’ve been trying to figure out how to sculpt fur, looking at a few hairy mutants to get some ideas. I’m dumb-founded by the textures, but they look mass-produced and machine made.

Then enters this guy, sculpted by the artist Jean St. Jean. Artists make art, and that’s exactly what this is, a piece of hand-sculpted articulated art. A marriage of something that looks like a McFarlane figure with the articulation of a Marvel Diamond Select. It has a slightly rough (HA!) quality to the fur texture, and that’s perfect given the subject matter of such a (fur)ocious beast. There’s an obvious difference between, say, a young Master Splinter and this terrifying crypto (and if far better than the Dire Beaver). 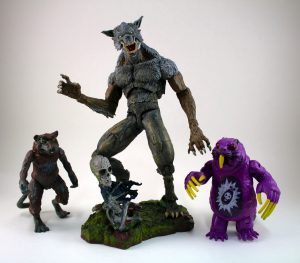 The detailing didn’t stop at just the figure, but even to the base. The grass, mud, moss, and muck have several textures and color tones. It even has a removable trophy marking the Rougarou’s territory (in researching the Rougarou, I’ve not seen mention of trophies and territory, but there have been stories of dismemberment in the lore).

All-in-all, this figure is a must-have for anyone who loves crytpozoology, monsters, or just nicely rendered figures. When I can get him to stand, I have a blast taking pictures of this guy …as you can hopefully tell. If you decide to buy one, let Creatureplica know you read this review! 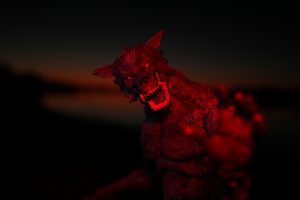