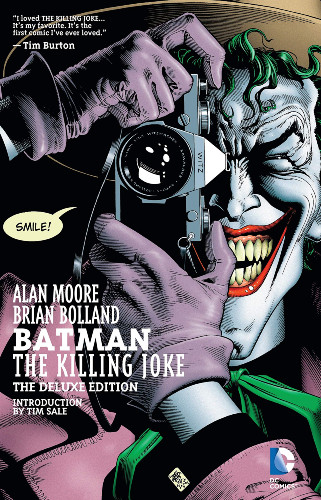 Perhaps no other supervillain in comic book history has enjoyed more mainstream success than Batman’s arch-enemy, the Joker. The psychotic Clown Prince of Crime has been portrayed by actors such as Cesar Romero, Jack Nicholson, Mark Hamill, Heath Ledger, Zack Galifianakis, Jared Leto, and Joaquin Phoenix over the last several decades of television, film, and video games. Writers and artists have portrayed him as a mob boss, loony supervillain, domestic terrorist, and disgruntled employee in an effort to get at the heart of what makes the Joker tick.

In 1988, Alan Moore and Brian Bolland crafted what many consider a definitive Joker story in Batman: The Killing Joke. Typically enshrined alongside other dark yet game-changing narratives such as The Dark Knight Returns, Batman: Year One, and Watchmen, does Moore and Bolland’s graphic novel deserve the praise it so often receives? 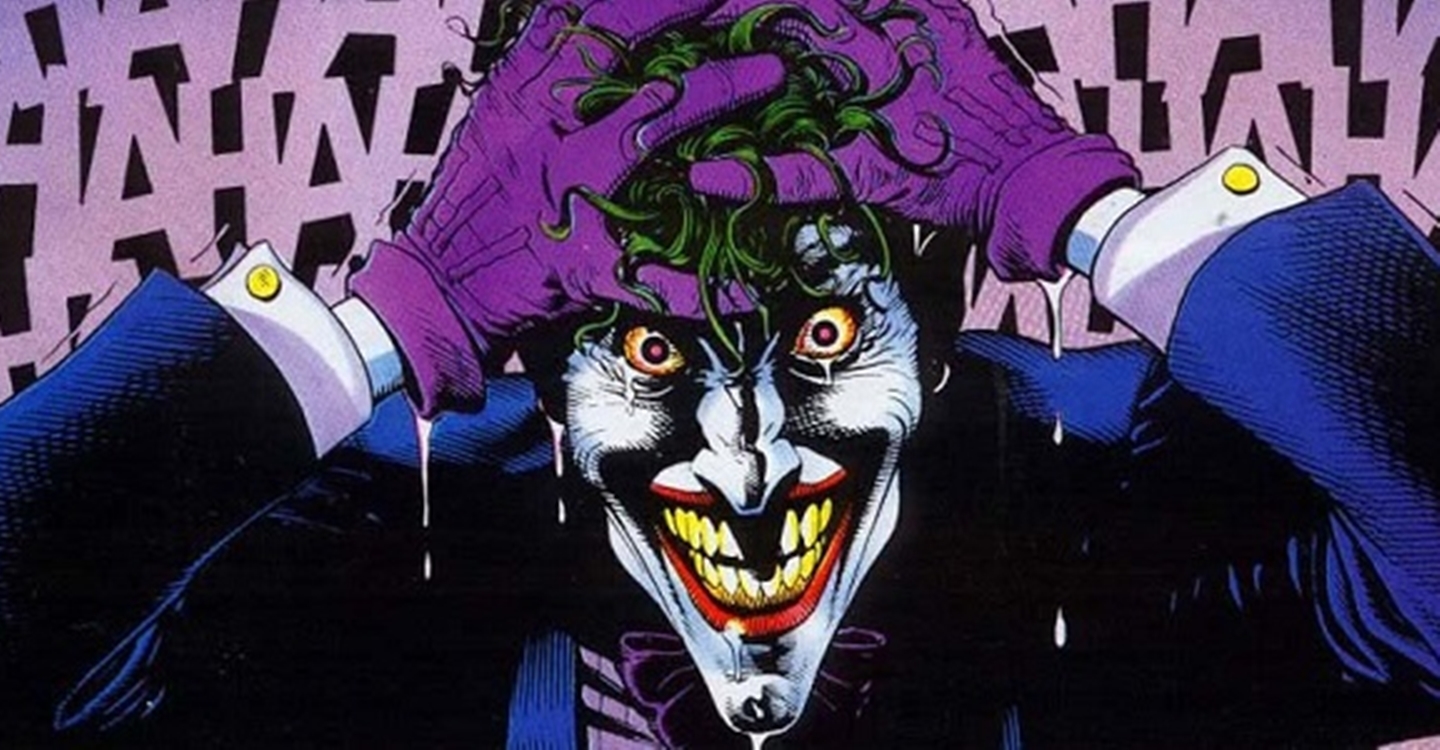 Violence/Scary Images: The graphic novel’s pivotal scene sees a young woman shot and paralyzed – blood spurts from her wound. A man is poisoned, his face frozen in a permanent grim. One character is punched twice and tazed. Two men are shot and killed. A character is squirted with acid, though it does no harm. Two characters tussle for a few pages, hitting each other and throwing one another. Someone gets their hand stepped on. A character dies violently off-panel; their death is relayed to someone else. A man buys a dilapidated theme park knowing the defunct rides could harm people, particularly children.

Sexual Content: It’s implied that the aforementioned woman is sexually assaulted – we don’t see anything other than a man preparing to undress her. We do, however, later witness photos of her in a state of undress. Most of the photos are positioned in a way that obscure anything inappropriate, though a few are more explicit. Another man is stripped naked, but his body is largely obscured. Someone is said to be “good in the sack.” A few characters wear revealing outfits. Someone makes a reference to prostitution.

Drug/Alcohol Use: A few people smoke. A character pours himself a drink.

Spiritual Content: Humans are called “nature’s mistakes.” A criminal believes God sent Batman after him as a form of retribution.

Other Negative Content: A man vomits. The Joker views mankind as weak and spineless, thrust into a world of insanity and forced to make institutions and rules to guide himself.

Positive Content: For all the enmity between himself and the Joker, Batman repeatedly mentions how he doesn’t want their “relationship” to end in death for either of them. He even offers to help the Joker vanquish their rivalry peacefully. A character, though traumatized by the Joker, implores Batman to bring the villain in “by the book,” standing by his ideals even in the face of tragedy. We’re shown a glimpse into a loving relationship between a father and daughter. If the Joker’s background is to be trusted, we’re led to believe that he loved and was married to a kind woman.

I’m not one to tell anybody how they should interpret works of fiction. However, I should warn you that if you head into The Killing Joke hoping for a poppy, colorful tale, you’re going to be disappointed almost immediately. It is colorful, certainly. The main character resembles a clown, after all. But if you see the Joker’s ghoulish grin on the cover and, for some reason, think he’s a member of Bozo’s Circus or the Barnum & Bailey Circus, you’re in for a rude awakening. The Joker isn’t going to juggle or throw cream pies or entertain with hijinks or pratfalls aplenty. He’s more Heath Ledger or Joaquin Phoenix than Cesar Romero or Mark Hamill (who, interestingly enough, voiced the villain in a DC Animated adaptation of The Killing Joke). He’s here to make people miserable, and he does a bang-up job.

Chief among Joker’s deplorable antics is wounding Barbara Gordon, the former Batgirl and daughter of Gotham Police Commissioner, James Gordon. Invading the young woman’s home, Joker shoots her through the spine. Moore implies Joker assaults her and takes pictures of the aftermath after kidnapping her father. Commissioner Gordon is subjected to a series of tortures designed to break him mentally, from cockamamie show tunes to being shown pictures of the attack on Barbara. 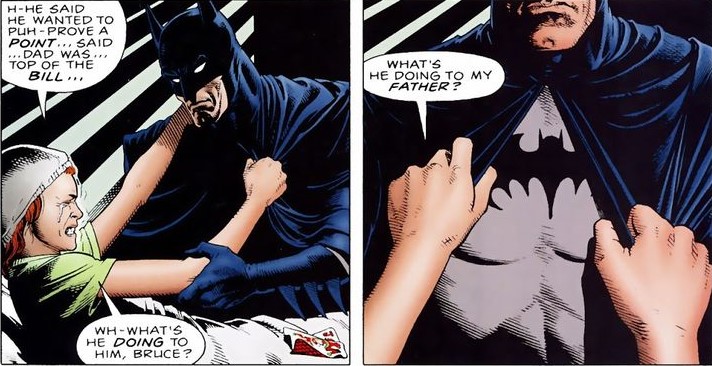 Moore and Bolland’s utilization of assault is nothing less than disturbing. While the attack itself is never shown, dialogue and imagery make the matter clear: in addition to committing a litany of other crimes, the Joker is now a rapist. Some fans may count their blessings that Moore and Bolland shy away from depicting anything explicit, but that mindset fails to address  that the creators inserted this particular plot to begin with. The assault on Barbara does nothing to enhance The Killing Joke or future depictions of the character. Readers of mainstream 80s, 90s, and early 00s Batman comics will know that, following the attack, Barbara was confined to a wheelchair. Unable to perform as Batgirl, she took on the logistically and technologically savvy role of Oracle. This was eventually changed during the New 52, where Barbara’s injuries were retconned and she once again adopted the Batgirl mantle. It’s important to note, however, that Moore and Bolland’s graphic novel impacted the character for over thirty years, real world time. And that’s only considering her physical injuries from the Joker’s gun.

The addition of assault is one step too far for the Joker, or for Moore and Bolland, to take. This kind of material must be beyond difficult to write about, and part of me can see why Moore and Bolland deflect the issue. Batman never addresses those crimes with the Joker, nor does the reader feel as if Batman is “avenging” Barbara for that particular reason. The story even ends prior to the Joker being taken into custody, so there’s no sense of Batman righting any wrongs by bringing the villain to justice. So why have Joker assault Barbara in the first place? Barbara feels more like a tool than a character, utilized to push the envelope of the Joker’s wickedness in a direction that is not necessary for this particular story or appropriate for any narrative. 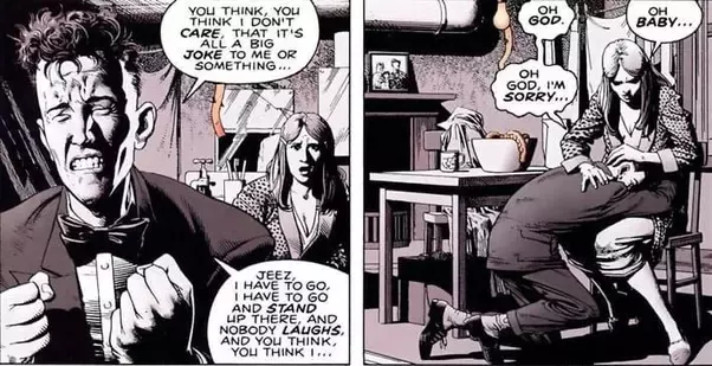 To their credit, Moore and Bolland provide an engaging potential backstory for the Joker. Moore details a morose origin for the villain, drawing from tales of old to influence his story of how a failed comedian turns into a heinous supervillain. Fascinatingly, Moore indicates this particular origin may not be true. “If I’m going to have a past, I prefer it to be multiple choice!” the Joker states at one point. Real or not, the backstory is still a much-needed look into the possible life of the Joker before he became the crazed clown. The flashbacks add dimension to the criminal, making me wish the creators had focused more on this aspect of the Joker. Part of me finds it extremely difficult to sympathize with his tragic past, knowing his horrific actions in the present, but the information is intriguing nevertheless. “Who is the Joker, really?” the creators ask, dangling the tantalizing answers in front of your nose before switching back to the Joker’s terrifying scheme.

Yet not all is total hopelessness and bleak tragedy. Commissioner Gordon, perhaps, comes across as the standout character of the story, exemplifying a glimmer of light in an otherwise dark tale. Mentally and physically tormented by the Joker, the grizzled veteran cop nevertheless remains staunch in his unwavering principles. When Batman chases the Joker after rescuing the commissioner, Gordon calls after him, “By the book, you hear? We have to show him! We have to show him that our way works!” Joker’s attack on Barbara and mistreatment of her father are tough to read, but this single instance becomes a moment of relief. For the last several pages, Moore has piled on darkness and despair, foisting the Joker’s warped perception of humanity onto the reader. Moore injects so much hopelessness you start to wonder if the Joker is just his mouthpiece, his vehicle for driving forward his own unfortunately bleak view of the world. Therefore, Gordon’s assertion comes as a beautiful pinhole, allowing light to come in. 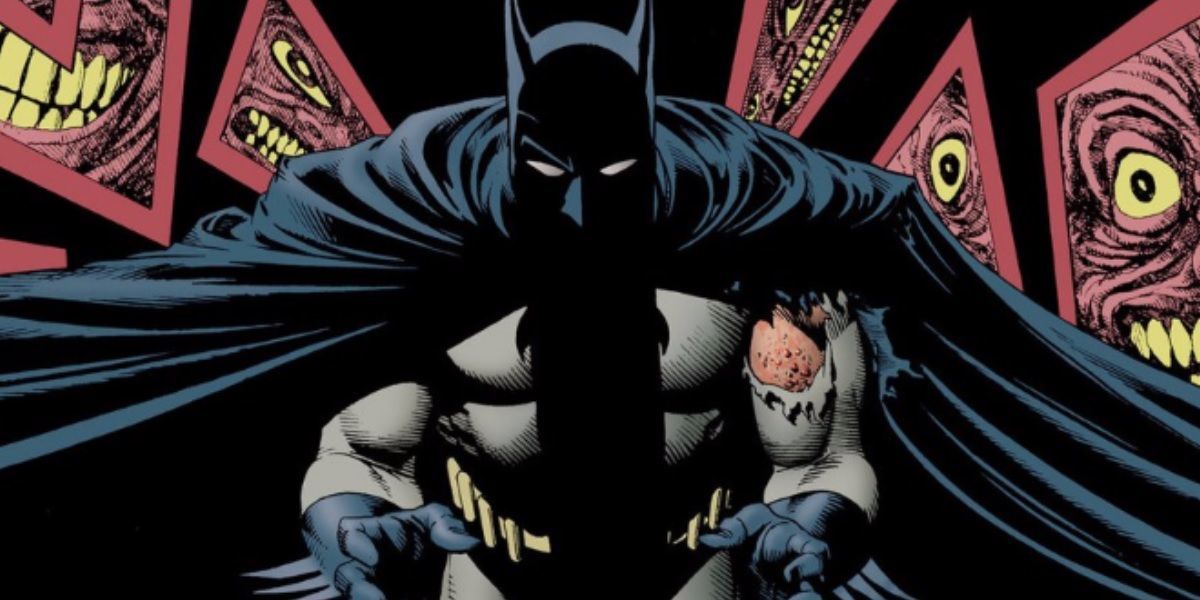 Some may look at Gordon’s statement and think Well, yeah, he’s a police officer–of course he’d say that! That notion, however, overlooks the torture Gordon has endured. He doesn’t encourage Batman simply because he wears a badge; he encourages Batman because he believes in his ideals so strongly, not even the Joker can strip him of that faith. One could also argue the ambiguous ending disrupts Gordon’s determined outlook, as we’re left with no idea whether the Joker is brought in “by the book” or not. I would personally argue the Joker is incarcerated for his crimes, Batman’s potentially murderous rage soothed by Gordon’s plea. Maybe it’s just me, but that particular ending helps soften the brutal blows which come before it.

“Soften” but not wholly smooth over. The Killing Joke, enrapturing as it has been to the Batman fanbase for the last thirty-plus years, is not without its serious foibles. Gordon’s victory over Joker’s villainy doesn’t absolve the wickedness the clown commits against him and Barbara. The villain’s backstory, though enlightening, doesn’t make the Joker any less a monster. And even Batman, though portrayed as heroic, feels sidelined in favor of  a woman getting shot through the spine and an old man tortured on carnival rides. Moore and Bolland don’t discredit Barbara by visually prolonging her horrific ordeal, but they don’t deal with her situation with the honest weight and sympathy that should be granted her. 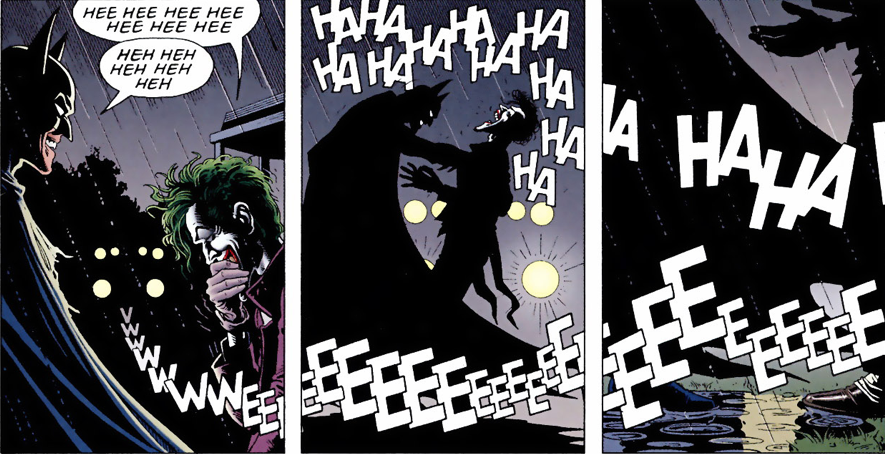 Hopefully, once you’ve worked your way through this graphic novel, you’ll be able to see the Joker’s fallacious philosophies for the shallow, dangerous lies they are and embrace Gordon’s message of faith in the midst of deep darkness. The Joker asserts that only “one bad day” is enough to remold a person into his clownish image. Gordon and Batman disprove this. Unfortunately, enlightening as Gordon’s plea ends up being, you have to trudge murky miles to reach that moment in this graphic novel. If you’re looking for a hopeful story, I’m going to suggest seeking out a different book or comic. Some “darker” stories nicely balance the shadows with the light. They clearly point out evil as wrong and allow the good guys to assert messages of justice and righteousness. The Killing Joke toes that line but never sides with the heroes completely. As a result, you’re left with a rather burdensome mire of shadows to wade through before reaching a faint glimmer of light. Hope lies elsewhere. In my mind, it’s not wholly worth it.

Moore and Bolland's graphic novel, though considered a classic, is fraught with disturbing imagery and a dark narrative. Even a series of engaging flashbacks and a late glimpse of hope can't wholly salvage the grim story told in the present.