We here at Geeks Under Grace like to highlight other people or organizations that are bringing hope and light to the geek community. I found out about one of these particular people named Hector Miray. He’s a pastor who speaks at various churches and groups about finding faith in fandom.

What does that mean exactly? Well, imagine reading a comic book and trying to pull out biblical lessons we can learn from these heroes or villians. Maybe you just saw an episode of Doctor Who and you could relate it to a bible verse you once read.

Hector has a knack for finding those important scenes that have impacted us throughout our lives and puts them all together to show us how God can be found in any medium. Whether you’re a comic book lover, a Whovian, Firefly addict or gamer you will find gems throughout this book that will impact your life.

I was given the opportunity to interview Hector about his book, why he does what he does, reactions from others when he’s out in conventions and how he became a pastor. Enjoy!

GUG: Hi, thanks for allowing this interview to happen. I’m thankful that we can do this, and am looking forward to asking you a few things on your latest book, Faith & Fandom.

H: Thanks for taking the time do it. I’m excited and grateful for the opportunity. Yeah, Faith & Fandom is the latest, first, and maybe last book if I don’t slow down a little bit.

GUG: Have you always been into comics, sci-fi, and other related media? What led you to become such a fan?

H: Comics have been in my world since elementary school. Between Ninja Turtles, Batman: The Animated Series, and X-Men, my cartoon intake in the early 90s pretty much indoctrinated me into the world of heroes. My mom would drop me off at the local comic shop on Saturday mornings and leave me until it closed. Sci-fi I’ve only really been into since Firefly.

But for me these stories just have more to offer than most of what’s out there. If I am going to sacrifice hours of my life to a story, I want it to be inspiring. I want it to make me want to be a hero, and to fight for the things that are worth fighting for. Sometimes it takes a story that’s larger than life to really see some of the real truths of our lives.

GUG: So, what inspired you to write this book, and how did it happen?

H: After a few years of going to comic cons, I began to truly see that there was really no representation of the gospel in a lot of the events I was going to. It’s like there was a void just waiting to be filled. Not something to force faith into a situation, but there are a lot of geeks who are believers, yet there are so few circumstances where these areas of life intentionally meet.

Finally, after leaving a con in summer 2013 I decided that I was going to attempt to do something to bridge the gap. I wrote the eight superhero chapters first and actually did them as messages for a summer camp, then spent four months pouring my free time (which is near nonexistent) into completing it. I shopped it around to different publishers, and when no one picked it up initially I went through Amazon’s self-publishing and have enjoyed the process.

GUG: Where did you get the concept of combining faith in God with all these other fiction characters from the Hulk to Doctor Who?

H: It’s less of a concept, and more just the way my mind works on a daily basis. I’ve been pursuing my faith almost as long as I’ve been a fan boy, so they intersect constantly whether I want them to or not. When I watch, read, or game, I constantly am seeing biblical parallels. When I’m teaching, or studying scripture I often see geek culture parallels, there are just very few outlets to be able to actually share these ideas. If you look though, there are tons of books comparing philosophy and psychology to these characters, it only seems appropriate that there would also be something that covers the spiritual end of the discussion as well.

GUG: Which were your favorite characters that you highlighted in your book and why?

H: Not to be cliché, but Batman was one for sure, and it’s pretty much just because of  the direction I took it in. Everyone has this concept of Batman being the ultimate hero, unstoppable, etc. (which I don’t disagree with), but writing about him as a broken orphan comparing to our own struggles was just liberating.

I’d also say River Song from Doctor Who. The way her story was told over four seasons of television was just masterfully done, and she is such an embodiment of sacrificial love, plus I just love talking about her. I’d also throw Walter White in there too, which I know calling Breaking Bad Sci-fi is a stretch, but I wanted to fit it in there somewhere. I literally wrote that chapter within a day after the series finale, and it was so fresh on my mind and heart and was my own closure to the series.

GUG: What feedback have you received from your readers from your book?

H: Everything has been fairly positive. Some people have recommended subjects or characters I should do next. A lot of people have said things like, “I would have never thought of that.” My book fits a very niche culture so a lot of the people who actually choose to read it know what they are getting into. The only negatives I’ve really received had been on some editorial issues, and this was also my editor’s first book too. So we’re aware it’s not perfect, but hopefully the heart outweighs the grammar fouls. 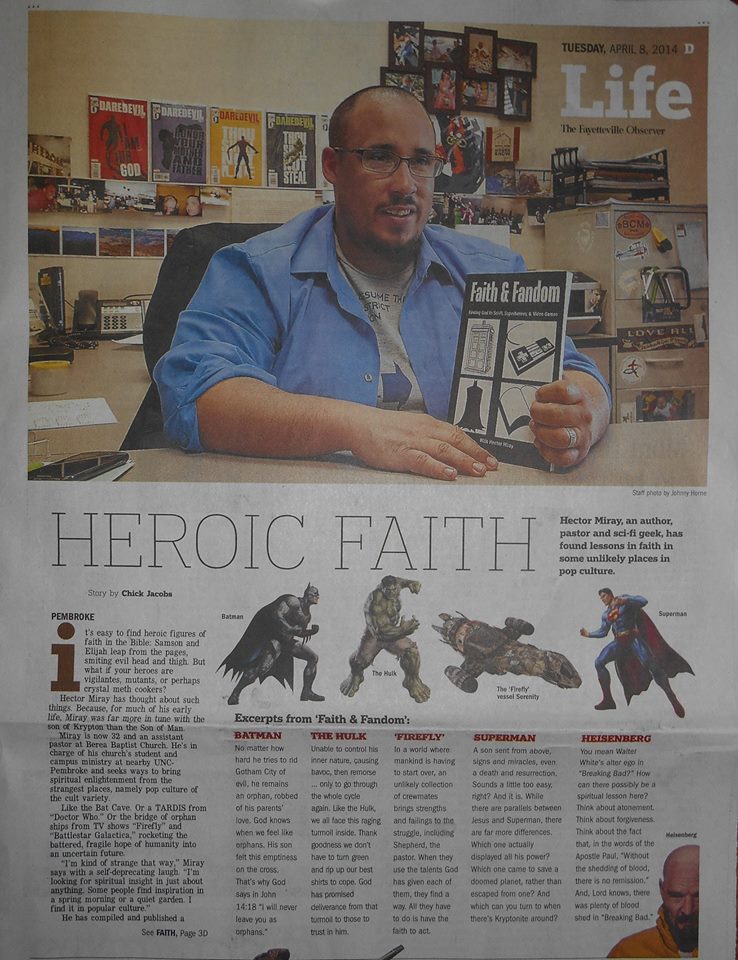 GUG: I see that you travel to a lot of different events and you have your own booth. What do you hope to accomplish by bringing the message of Faith & Fandom to these places? How have people reacted when they meet you and see what you have going on?

H: I hope to just be a presence of salt and light in these arenas. That a believer who walks into a con would see something affirming that there’s a welcome spot for them. For those who aren’t believers to spark a discussion that might just be a way of opening the door for them.

That faith doesn’t always fit into a certain mold. I hope to show you can have a meaningful faith walk regardless if you are in a suit in a sanctuary or in cosplay in a convention center. Plus it’s a valid excuse for me to go to lots of cons and events.

People react in a variety of ways. Some people just walk by and smile. Some people express how cool they think the concept is. A fairly common reaction though is people looking, seeing what it is, and then quickly walking by, avoiding eye contact because they don’t want to talk about God.

But I make it a point to never start or take a conversation in any direction the person isn’t interested in. Surprisingly I’ve yet to have a “nasty” confrontation, which I’m grateful for. Having conversations with the con-goers as well as some of the other vendors is one of my favorite aspects by far.

GUG: How did you become a pastor? How has your interests interlaced itself with your pastoral ministry?

H: I was a missionary running a Bible camp for nine years, and somewhere in there I began volunteering with a campus ministry, and eventually became a pastor of the church I volunteered with. They’ve always worked their way in there when appropriately possible. We’ve had video game weekends for students. Every time we go on a field trip we make detours to local comic book shops. I’ve done several weeks of Superhero-themed summer camp for ministries, and frequently my whovian students will stay after our Thursday Bible study to watch the latest episode of Doctor Who and discuss it.

I’m too much of a geek for most of my youth group, I’m adequately geeky for my college ministry, and I doubt my adult congregation pays enough attention to notice. It’s never something I’ve purposely tried to hide or tone down, but if there’s a way I can use it to further the Kingdom, I definitely will. 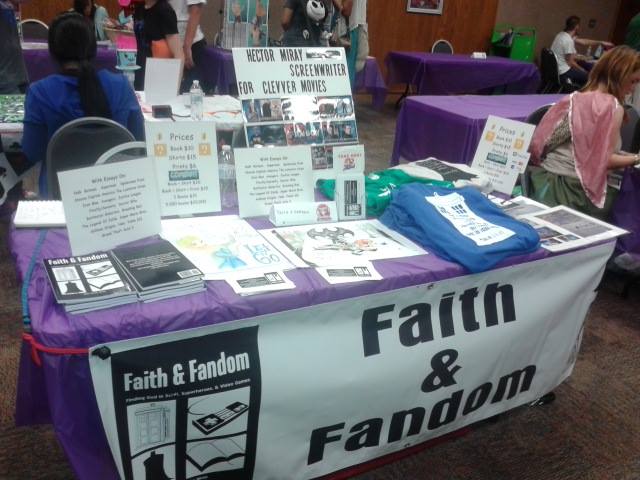 GUG: Okay, now we can get into some fun, geek related questions. Ready?

H: Almost Famous. There’s just something about the beautiful combination of a movie about music, love, innocence, and adventure with an amazing soundtrack all to tell a heartfelt story. But for the sake of conversation I will say The Dark Knight is my second favorite.

GUG: Most hated comic book villain and why?

H: I don’t know if I have a villain I hate. A good villain makes the story that much better. I hate when a great villain gets poorly written. My favorite Villain is Hush from Batman, so when he is written poorly or used in a horrible way (the “Hush Returns” storyline), I hate it the most.

H: Personally I love the Flash Thompson Venom. Like, choosing a character based on look alone, I’d go with him. Side note though, everyone looks better when drawn by Jim Lee.

GUG: If you could be any video game/comic book/sci-fi/ect. character, who would it be and why?

H: I would be The Doctor from Doctor Who. For me the concept of going around saving people day in and day out for my entire existence is about as great as you can get. Taking my best friends along on adventures, shenanigans would abound. Although I’d choose “The Shepherd” instead of “The Doctor” (if anyone from the BBC is reading this, feel free to offer me a spin-off series).

GUG: Thank you so much Hector for your time and for doing this interview with us. Where can our readers find you or purchase your book?

H: You can reach me on Facebook, Twitter, or email me at faithandfandom@gmail.com. Amazon is the main place to get the book. 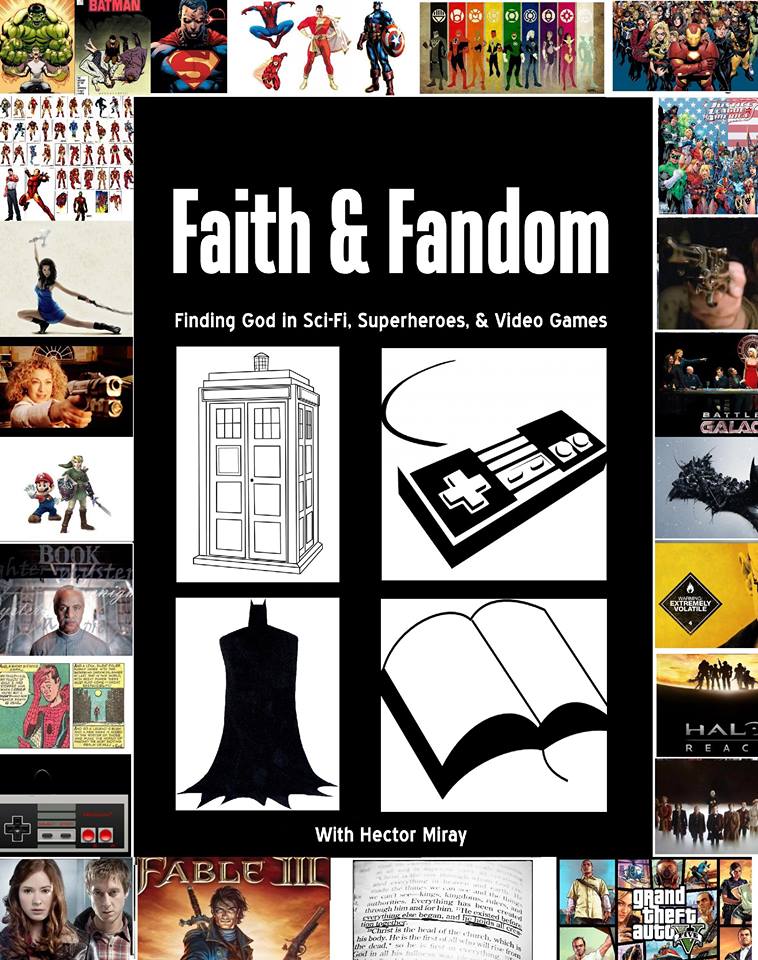