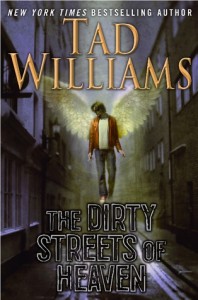 in recent, contemporary, fantasy novels, the name Tad Williams might not be an unfamiliar one.  But for those of you who’ve never had the fortune of cracking open one of this man’s books, please stick around.  I’ve recently come to acquaint myself with Mister Williams’s most recent duo of page-turners, the Bobby Dollar novels (soon to be a trio), which consist of The Dirty Streets of Heaven and Happy Hour in Hell. Within this article, I intend to cover a few different elements of the story for this angel’s fantastic, and sometimes thought-turning, adventure.

Before continuing, you are due the obligatory notice that there will be spoilers, though they should be shallow.  Not much of a fan for spoilers myself, I would like to keep them at a minimum for any prospective readers.

A dark, noir fantasy, The Dirty Streets of Heaven kicks off the story of Angel Doloriel, advocate for the Third House of Heaven (a.k.a. “Yours Truly” or just, you know, “Bobby Dollar” as he prefers).  Dollar lives his celestial life as a lesser angel, tasked with bringing as many lost and disparaging souls to Heaven as lies in his power.  He does this by battling demon prosecutors in a war of judicial propriety, weighing sins of that soul versus their good deeds and otherwise hoping for the best.  He’s successful.  Sometimes.  He tries, he really does, even if he doesn’t always feel like it.  It is a fight over eternal salvation or damnation, after all.  But this aside, Dollar is rather unconventional in his state of living.  Throughout the books, he tussles more than once with very mortal complications–small things like smoking, alcoholism, lust, anger, hatred, and doubt in, well, God.  Yeah, that’s right: an angel that isn’t sure if God exists.  In fact, he doesn’t even know if Christianity is the truest religion, if he was ever human, always an angel, or at one time something else entirely.

Needless to say, there are a lot of questions rolling around in little Bobby’s brain, to put it lightly.

These inner struggles are best experienced from the voice of Dollar himself.  Author Williams has crafted a very interesting tongue for our favorite angel, laced with snarky sarcasm and enough wit to make you giggle in your chair more than once.  It helps that Dollar keeps company with strange, strange creatures in the cosmic world of San Jude, his home away from Heaven.

As it must, the balance of his fragile and questionable existence goes awry when a soul Bobby’s assigned to recruit for the Heavenly domain just up and vanishes from existence.  As you can guess, this isn’t normal.  What’s more, it’s so abnormal that both Heaven and Hell lose their minds over it, and everything starts exploding–both physically and otherwise.  Before long, Angel Doloriel is caught up trying to solve a crime infinitely beyond himself, all the while fending off his own celestial bosses, an invincible beast literally older than Hell and all its inhabitants, and Eligor–one of Hell’s most powerful demon lords.

All in all, Bobby considers it a less than pleasant day. And it’s made that much worse when he starts falling for Casimira, Countess of Cold Hands and bringer of bad things to our troubled little advocate.

That’s just the first book, and only a small chunk of it.  Things become arguably more off-the-wall in the sequel, when Dollar throws logic and sanity like chaff to the wind and plunges into the place that no angel should ever dream of going.  Yep, the pit of Hell itself.  Alone.

Now, while the story and prose might be lean, concise, and excellent, I’d like to bring a moment’s focus to a different side of this tale.  Where does faith play a part in it?  As evidenced by the overall scheme and scope of the story, it’s not hiding any illusions that it’s a fantasy story, regardless of your personal beliefs or ideals of how the afterlife looks or if angels and demons exist.  Tad Williams simply saw a route and setting for a great plot, did research to fill in the cracks, and capitalized on the idea.  It’s not entirely unlike the popular television series “Supernatural”.

But the Bobby Dollar novels are riding an interesting line.  No right-hearted person would confuse these for Christian novels, despite the numerous threads of Christian under-stitching.  Bobby’s topsy-turvy suspicions of God and the other heavenly Principalities might do harm to secular readers that are away from the Christian faith or trying to find a faith.  Yet, at the same time, this story casts a better pitch for the nature and ultimatum of eternity for me than most sermons, classes, and books I’ve experienced on the subject.  Needless to say, these novels gave me a lot to think about.

While I did enjoy both installments of this series, and was able to suspend my idea for how angels and demons behave for the sake of the fantasy in my blood, I did have some trouble with the sexuality displayed in the books.  On general principle, demonstrating some sexual facet to a story is not something I have a problem with, but the presentation in the Bobby Dollar novels is needlessly raunchy and ultimately detracts from the quality as a whole.  Thankfully, this angel is not a running swathe of sexual ill-decisions, and at least progresses the story with his actions the couple of times they become relevant.  This is simply something that I felt was required to forewarn, as I did have a moment where I questioned if it would be safe for me to continue reading.  Perhaps our convictions will have different outcomes.

Overall, the story deals with a taste of theology, kinetic storytelling, and well-crafted characterization all wrapped into a hilarious, chaotic little bundle.  The final installment Sleeping Late on Judgment Day is due out later this year (here’s hoping), and yes, I do intend to buy it soon after it hits the shelves.  Should the stars align, I might be writing a review for that bad boy, too.

I say all of this in spite of the fact that when I first read Dirty Streets of Heaven, I thought it was a standalone novel.  This, my friends, is why we have Google.