Compared to C.S. Lewis for his ability to craft intricate fantasy worlds and dimensional characters interwoven with biblical truths, Bryan Davis is a best-selling Christian fantasy author who has penned over twenty-five books. Geeks Under Grace “sat down” with Bryan to ask him about his faith, writing, favorite characters, upcoming works, and latest novel: Omega Dragon. 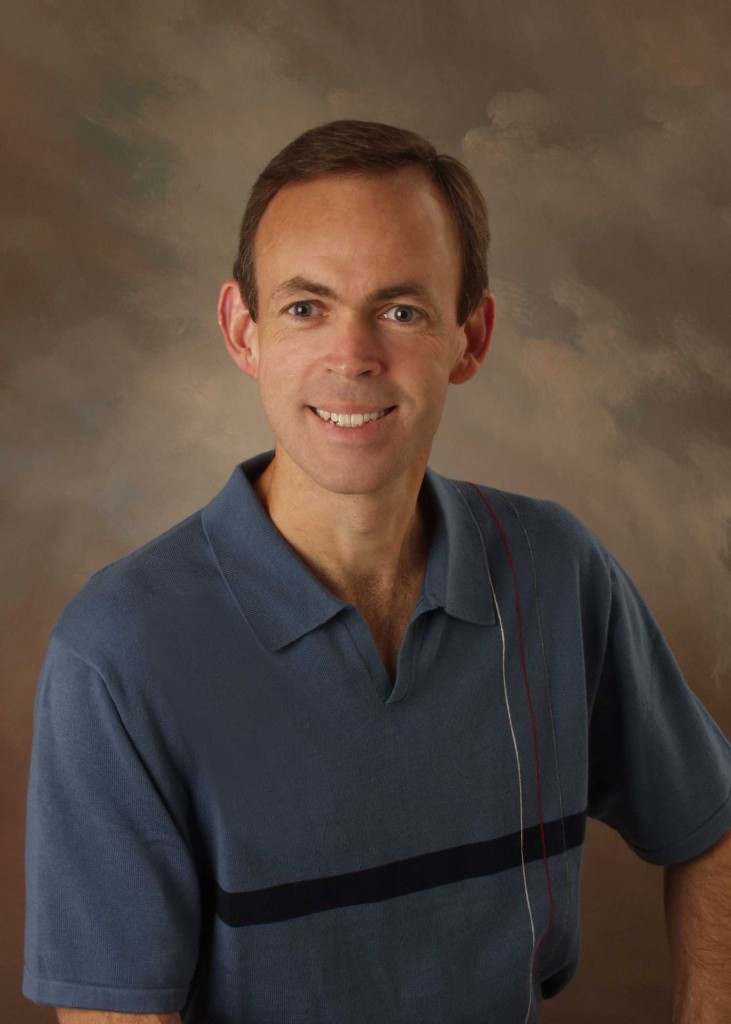 Q. When did you know you wanted to be a fantasy author and how long have you been writing professionally?

Bryan: In 1994, I began writing a story with my children as a way to get them excited about writing. That story grew into a novel, and I submitted it for publication to various places without success. Then around 1995 to 1996 I had a dream about a boy who could breathe fire. When I told my eldest son about the dream, he encouraged me to turn it into a fantasy story, because he loves fantasy. So we dreamed up the premise that eventually became Raising Dragons, the first book in the Dragons in our Midst series.

After many more rejections from publishing houses, I quit my “day job” in 2002 to pursue writing full time, though I didn’t yet have any royalty publishing contracts, so I suppose whether or not that is “writing professionally” is debatable. In any case, I received my first contract in 2003, and Raising Dragons came out in 2004.

Q. As an author of Christian fantasy, specifically, what are the biggest difficulties you face? How has God helped you overcome these difficulties?

Bryan: Early on, after Raising Dragons came out, I received negative feedback about using dragons in Christian stories. “Dragons are evil.” “Your books are of the devil.” “You’re going to hell for writing those stories.” I heard from one reader who said his pastor rebuked me by name from the pulpit for teaching that people evolved from dragons, which, of course, is total nonsense.

I overcame them by remembering a simple statement: “Some people are just ignorant.” And I would move on. It also helped thinking that Jesus sometimes faced absurd opposition, so I was in good company. Finally, praying for them helped me have compassion for them.

“I hope readers take away the heart of a selfless, sacrificial warrior. We are always involved in spiritual battles, and many people are not up to the challenge.”

Q. Are there any other Christian authors whom you look up to or draw inspiration from? If so, who are they?

Bryan: My favorite author is C. S. Lewis. His blend of fantasy and reality in Narnia inspired me greatly as I wrote Raising Dragons.

Q. What is a day in the life of a writer like? Do you set a certain quota to complete each day? Do you have any specific rituals or patterns that aid your work?

Bryan: During writing seasons, my day usually starts around 5 a.m. with devotions, exercise, and breakfast. Then after reading the news and emails, I begin writing, usually, before 8 a.m. My goal is to write 3000 to 4000 polished words before I call it a day. When I am touring, I rarely write at all. My days are filled with travel, speaking, and book sales, which is far more exhausting than writing is. This year, I plan to pull back on touring and concentrate more on writing. I hope to write and edit three novels in 2015. 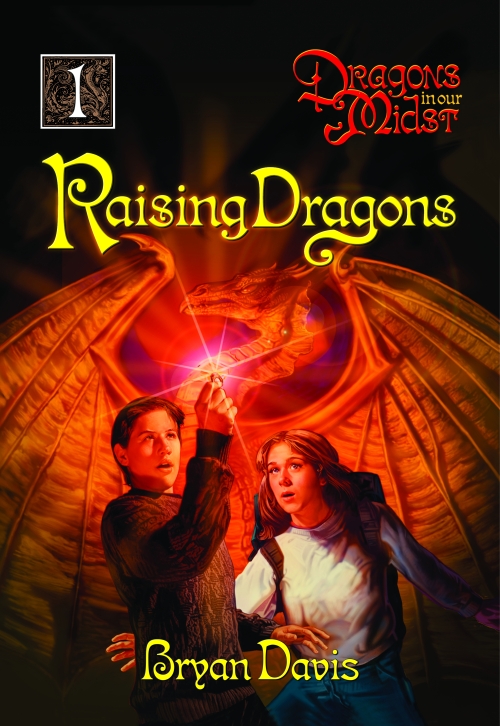 Q. Out of all the fictional characters you have created, who would you say are your top five favorites and why?

Bryan: Bonnie Silver (Dragons in our Midst) is my ideal teenaged female, the model I hope readers strive to emulate. Although she has fears and doubts while facing great challenges, she overcomes by faith.

Adrian Masters (Tales of Starlight) is my ideal young man (24 years old), the model of a man on a spiritual journey. He is chivalrous to a fault, which sometimes causes him problems, but he always means well. He is fiercely loyal to his family and will sacrifice his life without question for those whom he loves.

Jared Bannister is a dad I sympathize with. He does his best to relate to his wife and son, but because of his draconic past, he feels a barrier that never quite goes away. He is courageous and sacrificial, even when he is aloof.

Cassabrie the Starlighter is mysterious, independent, and forceful, yet she is also loving, playful, and filled with love.

Sapphira Adi is the model of godly suffering and sacrifice. No other character in my stories suffered as much as she did, and the challenge to her faith was excruciating. Yet, even through many tears, she triumphed.

Q. What is the most strange, unusual, or unforgettable experience you have ever had with a fan?

Bryan: I always have unforgettable times with my fans when they come to sit under my teaching at the Florida Christian Writers Conference. We laugh together till we hurt. Yet, I wouldn’t call those times strange.

Some of the emails I get are truly odd. One reader told me that he loves my books because he used to be a dragon, and he gave me a link to a group of people who make the same claim. They really do think they were once dragons. 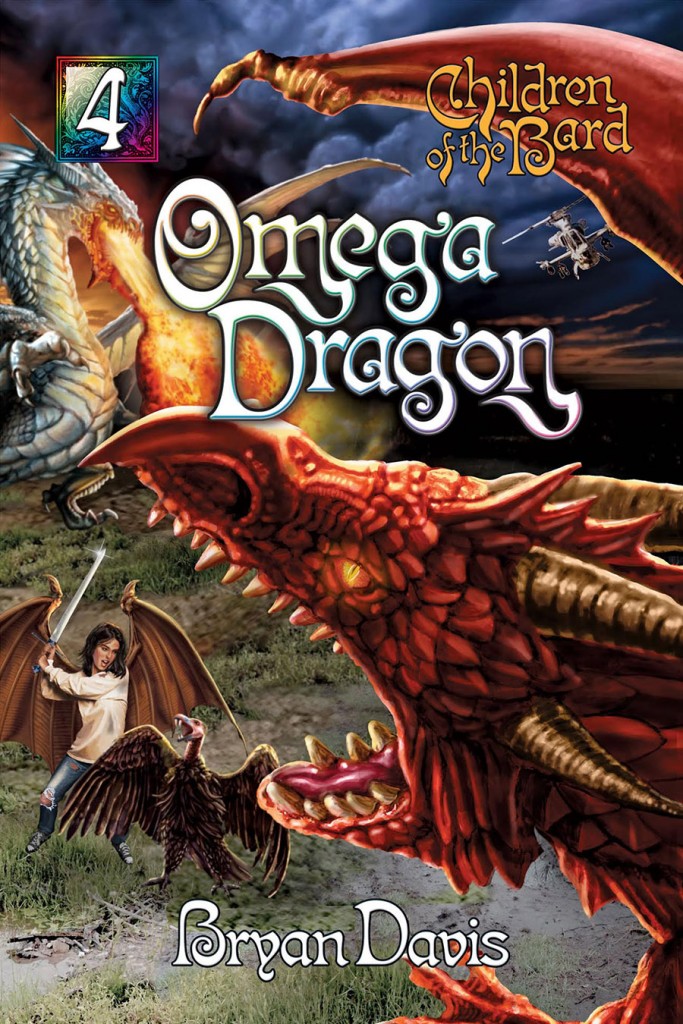 Q. Tell us a little about your latest project—the final novel in the Children of the Bard series, Omega Dragon. What has been the most exciting, surprising, or fun part of writing this novel? Did a specific character especially stand out?

Bryan: Omega Dragon, book #4 in Children of the Bard, is book #12 in the Dragons in our Midst story world. It is the last book in a very long tale that consumed more than 1.5 million words.

The most exciting, surprising, and fun part of the story was watching the two main characters, Matt and Lauren, face and conquer unbelievable challenges. As I went into the story, I had no idea that their obstacles would be so seemingly insurmountable. They really suffered a lot, which always makes a story more satisfying when the characters reach the end of their journeys.

Q. Omega Dragon marks the ending of a franchise that has spanned over ten years of your writing career (and ten years of the lives of your readers). What do you hope readers will take away from this final book in the series?

Bryan: I hope readers take away the heart of a selfless, sacrificial warrior. We are always involved in spiritual battles, and many people are not up to the challenge. We live in a culture that worships self and entertainment, and many bow to those idols, often because everyone they know also pays homage to them.

These books have provided character models who refuse to bow to those idols. With hearts filled with passion and purpose, they lay their lives down to serve God and others. My hope is that readers will emulate these qualities.

“As I went into the story, I had no idea that their obstacles would be so seemingly insurmountable. They really suffered a lot, which always makes a story more satisfying when the characters reach the end of their journeys.” 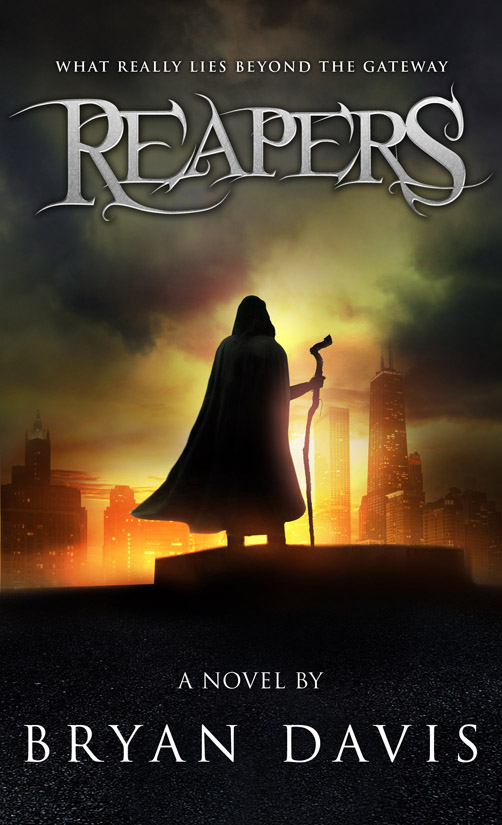 Q. Do you have any future projects in the works? Can you tell us a little about them?

1. The second book in the Reapers Trilogy, a dystopian tale about people who collect souls and wandering ghosts.
2. A super-hero tale for 8 to 12 year olds that will follow the adventures of a 12-year-old genius boy and his endearing 8-year-old sister as they try to take the place of the city’s superhero who died in the young boy’s arms. They have to complete the hero’s missions without letting the villain know that he is dead.
3. A graphic novel version of Raising Dragons.
4. An adult thriller that is tentatively entitled The Scent of Her Soul. I am not far enough into this story to describe it.

Q. As Geeks Under Grace is a Christ-centered website that focuses on all things geek, we have to ask: Do you have any favorite videogames, movies, novels, or other geeky media?

Bryan: I am not a fan of videogames, but I do enjoy movies and novels. My favorite recent geeky movies were Captain America: the Winter Soldier and Edge of Tomorrow, but I can’t recall any recently published novels that I enjoyed. My favorite novels are fairly old: To Kill a Mockingbird (Harper Lee), Joan of Arc (Mark Twain), and Till We Have Faces (C. S. Lewis).

Geeks Under Grace would again like to thank Bryan Davis for taking the time to participate in this interview. To find out more about Bryan Davis, keep up with his latest work, and purchase his novels, be sure to click on the links below: