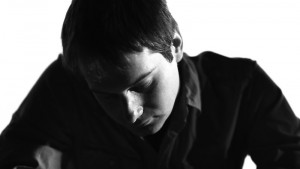 It’s wonderful to talk with people who are passionate about what they do. That’s why I’m extremely grateful that I got to ask comic book author and artist, Jonny Jimison, about his newest project, The Dragon Lord Saga: Martin and Marco. In our talk, Jonny talks about his ten-year-old idea, and how it finally came to be published through the help of a successfully-backed Kickstarter project. Our creative readers will also appreciate the helpful tidbits Jonny shared about writing, overcoming artist’s blocks, and how faith is a part of the creative process.

GUG: For those GUG readers who may not be familiar with you, tell us about yourself and your past work.

JJ: I started pursuing comics in a big way around 2007. I produced a webcomic, Getting Ethan, that ran six days a week for around five years. Along the way, I dabbled with short comic book stories, guest posts on comic blogs, and other projects. Almost all of it has been self-published, online content… until Martin and Marco!

GUG: How did you get started reading comics? And can you talk about the transition from reader to creator?

JJ: Ah, my origin story! I grew up reading Peanuts, Calvin and Hobbes, and the Donald Duck comics by Carl Barks and Don Rosa. Later, I added classic Marvel and DC to the mix. For years I doodled characters, but never thought about pursuing the art form. Sure, I drew comics for my own amusement, but it wasn’t until I graduated Bible college in 2007 that I thought I should apply myself to something that I loved to do!

What really fueled me through this period was discovering the highly-stylized, story-centered comics published by imprints like First Second, Archaia, and Scholastic Graphics. I read those comics religiously, because those are the stories I dream of doing!

GUG: Why do you like the medium of comics?

JJ: You know, I’ve tried to write lengthy pro-comics essays about what makes the art form special, but for me it’s all about personality traits. I love reading; I’m a visual person. Therefore: comics. 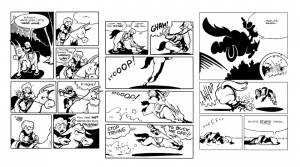 GUG: How do faith and geeky things (like comics and video games) relate?

JJ: I believe that the power of stories comes from truth. A truth that’s written into the stories by people made in God’s image.

I believe that the aesthetic beauty and ingenuity in media is an outgrowth of the God-painted universe.

I believe that the joy of sharing a geeky love of something with friends is part of the kinship and communion of God’s design.

In geeky things, like everything else, God is at the center. Faith points to the power and wonder of the Creator’s involvement in our creations!

GUG: Wow, well put! How has your faith influenced your work as a writer and artist?

JJ: I think it’s closer to say that God has influenced my faith through my work as an artist. In composing stories—my own miniature creations, spoken out of darkness in the image of God—He walks me through my own frustration, confusion, and doubt. God uses the process of storytelling to teach me perspective, learning from my own characters as I write their stories. 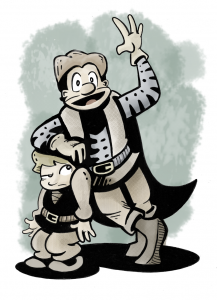 GUG: Tell us about Martin and Marco. Where did you draw inspiration for this new series?

JJ: The original idea happened in 2003. It was nothing special, just a copycat Tolkien story. I did a lot of copycat stories back then. Before you can make something of your own, you learn by mimicking others.

What kept this story alive was not just the plot and the cast of characters—it was the entire alternate world. It had a history and geography that I could play around with endlessly.

It took about ten years to really start hammering down the story in graphic novel form. By that time, I had replaced the weak, Tolkien copycatting with original ideas. Although, the core of the plot remains the same.

GUG: What can you tell us about the characters Martin and Marco?

JJ: Martin, the soldier, longs for a life of adventure. Marco, the stableboy, wants to stay home, where it’s safe. But adventures end up taking them both by surprise. They encounter dragons, magic, thieves, and monsters—anything the outside world can throw at them!

GUG: Since this story takes place in a fantasy past (with dragons and the like), how did you prepare to draw these creatures and environments? 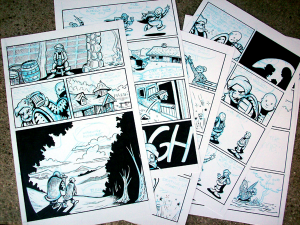 JJ: I traced a lot. When I first began drawing comics, I thought tracing was cheating. But like I said, before you can make something of your own, you learn by mimicking others. That could be copying the world God created or others artists’ interpretation of that world. Tracing has become my best friend—not only on the dragons, but also environments, character poses, and especially horses.

Also, never underestimate the power of doodling. Tracing gives you the tools, but doodling helps you to use those tools to bring everything together! 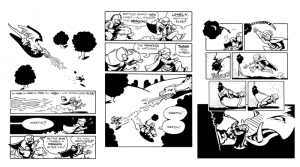 GUG: Congratulations on a successful Kickstarter campaign! Can you talk about your experience with crowdfunding?

JJ: I was blessed to have a half-dozen friends who had already completed successful Kickstarter campaigns—I credit the success of Martin and Marco to their advice and participation!

Doing my first Kickstarter campaign was similar to doing my first graphic novel. It took much longer than it needed to, because I was making mistakes and learning along the way. Now that I’ve learned what not to do and understand the timing more, the second time around should go much smoother!

GUG: In your Kickstarter video, you mention that the original tone for the story was serious—like Lord of the Rings. That is, until you began adding more humor to it. What influenced your decision to move the writing in that direction?

JJ: The original story was wannabe-Tolkien, and while I love me some Tolkien, I’m not him. I’m not a linguist who is well-schooled in epic poetry—I’m a comics geek who loves fun adventure stories.

So over the years I refit the story to be my own. I’m not meant to write watered-down Tolkien, I’m meant to write the best Jonny Jimison has to offer. So the story became more like a whimsical Calvin and Hobbes strip or a Daffy Duck cartoon, rather than epic English literature. This is language I am versed in!

That’s not to say that I can’t draw a serious comic. But I wanted to offer this project in the spirit of fun rather than drama. And my spirit of fun has a lot of slapstick and terrible puns. 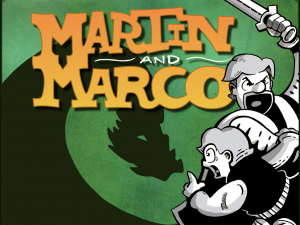 GUG: Martin and Marco is Volume 1 of The Dragon Lord Saga. When can we expect to get our hands on Volume 2? Will you be going the Kickstarter route once again?

JJ: My goal is one book per year, with a new Kickstarter at the end of each summer. Fingers crossed!

GUG: For our creative readers, what’s your advice on overcoming creator’s block?

JJ: A lot of the material in The Dragon Lord Saga came from this process:

1) There’s something in life I don’t understand.

2) In an effort to understand it, I build a story around it. For example, “How would Marco react to this? What would this situation look like in his world?”

3) The results wind up taking Marco’s story in exciting and unexpected directions!

That’s been my approach to writer’s block: take your eyes off your story for a while and look at your life, or your friend’s life, or the world around you. Find the things that naturally pique your curiosity, or scare you, or compel you. Then reinterpret those things through the lens’ of your characters. New stories just start happening! 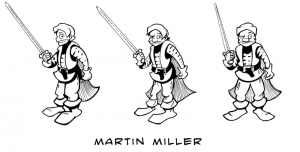 JJ: Stephen McCranie (of Doodle Alley) once said to me that a protagonist is a supporter of something, and an antagonist opposes it. Even though I usually think of the protagonist as the hero and the antagonist as the villain, there are lots of ways to interpret those terms. In Star Wars, you could make a good case that the Rebel Alliance are the antagonists, since they oppose the Empire.

In any case, I think the key to good protagonist behavior (or antagonist behavior) is a motivation that the reader can connect with. That could mean rooting for the character because you believe in them, or it might mean feeling for the character because you identify with their shortcomings. But that’s all in the hands of the reader—what connects with one person won’t connect with the next. So character depth is a must! If the character’s motivations are too simple, they run the risk of being unrelatable.

GUG: What are your thoughts on how the Church approaches media—like comics and video games? Is there anything you’d like to see done differently?

JJ: How does the Church approach media? Every local church body is different, so I’d hesitate to generalize. But I’ll tell you what’s dangerous for me: viewing scripture and prayer as bland but necessary “health food” and pop culture as destructive but delicious “junk food.”

Pop culture isn’t just fat and grease—it’s loaded with vitamins of truth if it’s processed with the Spirit. But if it’s destructive it doesn’t matter how delicious it is—it needs to go.

The truth of the Gospel is the most powerful, compelling, delicious story of all. But man, I always seem to fall for the lie that it’s a bland old story I’ve chewed too often. I know I’m not alone in that.

I’m fed so many sights, sounds, experiences, and ideas from morning to night. I think I need to look my food over and relish it, instead of absent-mindedly clearing my plate while thinking of something else. Easier said than done, right?

GUG: Thank you so much for your time! Tell us, how can we get a copy of Martin and Marco?

Thank you! As of now, you can order a copy online at mkt.com/jonnyjimison

For more information about comic book creator Jonny Jimison, check out the links below.