Review: Where the Crawdads Sing

Where the Crawdads Sing is about Kya Clark, known to townspeople as the Marsh Girl, growing up in the marsh of North Carolina in the 1960’s. When her family abandons her at age six, Kya must learn to survive on her own with only nature (and a handful of friends) to guide her. During her young adulthood, a tragedy occurs in the nearest town, and the prejudices of the day come to light when she is accused of murder.

This book is Delia Owens’ debut novel. The author has written numerous books of nonfiction, but this is her first attempt at fiction…a very successful attempt. Where the Crawdads Sing has been a New York Times Best-Seller for 58 weeks and (as of March 2020) is still going strong. What makes this book so appealing? Is it really worthy of all the hype?

Violence/Scary Images: Some boys discover a corpse, and the investigating police describe it, but the description is not explicit. A person commits murder. The main character’s father is abusive. Boys throws rocks at an African American man. Kya fights off an attempted rapist.

Drug/Alcohol References: Kya’s father is an alcoholic and abusive to his family when drunk. The town deputy mentions drug dealing as a possible motive for murder. A young man gets drunk and tries to rape Kya.

Sexual Content: Kya gets her menstrual cycle and must learn about it through friends. She and her love interest engage in detailed sexual exploration, which nearly leads to intercourse. Premarital intercourse occurs and is described simply as “lovemaking.” A young man tries to rape Kya, and the author vividly describes the scene. Some of the townspeople bet on who will be the first to “take the cherry” of the wild girl. Kya takes note of the various mating habits of marsh animals.

Other Negative Content: One of the main characters makes a morally questionable choice, and it is neither praised nor condemned. The town is prejudiced against Kya and her family because of their status as marsh dwellers. African Americans are segregated to “Colored Town,” called inappropriate names, and sometimes physically harassed. Women, children, and African Americans are not allowed to enter the bar in town; and African Americans cannot go into the shops, even in the rain.

Spiritual Content: An African American church donates clothing and food to Kya when no one else in town will.

Positive Content: The townspeople discover their underlying hatred of the Marsh Girl and attempt to change. A couple takes care of Kya, even though they face hardships because of their race. Kya starts to believe love exists, even after a lifetime of abandonment. 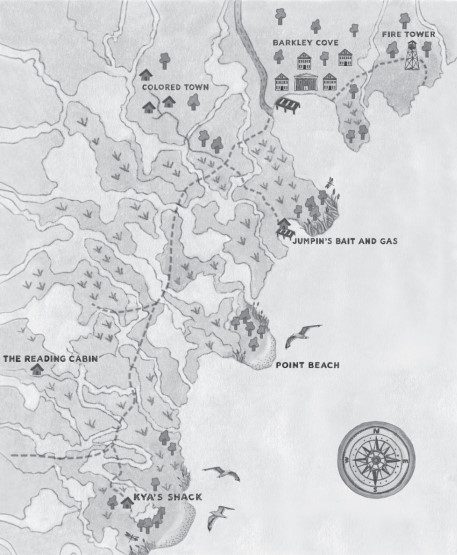 From the first line of the prologue, Owens throws the reader into the setting:

Marsh is not swamp. Marsh is a space of light, where grass grows in water, and water flows into the sky. … Then within the marsh, here and there, true swamp crawls into low-lying bogs, hidden in clammy forests. Swamp water is still and dark, having swallowed the light in its muddy throat (3).

The image of marsh versus swamp is present throughout Where the Crawdads Sing, linking Owens’ background in science to her literary genius. Kya lives in the marsh. She is comfortable and confident in her little shack with her gull family. She can survive with minimal human interaction, and knows the name of every shell and bird feather she collects. The swamp, though, is another beast entirely.

This love is evident to readers through the tender way Kya interacts with her surroundings: Painting her collection, whispering in the grasses, and feeding the gulls daily. She understands the marsh like no other, and this brings the author’s own vast knowledge of nature to light. Owens brilliantly weaves Kya’s story with a story about North Carolina wildlife. Poetry and metaphor scattered throughout the book force readers to learn more about the area without realizing they are doing so.

When someone reads this story, they step into that marsh and commit to a journey through the prejudices of the US South in the 1960’s. They will watch Kya struggle against bullies of all ages and realize even though she has proved her worth, the bullies still refuse to leave her alone. It forces readers to look at US history, and themselves, and question decisions they may take for granted.

At first glance, Where the Crawdads Sing is just another coming-of-age story with hints of a murder mystery. In reality, it is a study in intimacy. Kya never understands love. She watches her loving mother, abusive father, and five siblings walk down the dirt path out of her life forever. One couple helps her the best they can: Taking donations from their church to keep her clothed, advising her about female anatomy when she comes of age, and employing her for jobs they do not need. However, their help is limited. As African Americans, they are relegated to the “Colored Town” outside the town limits and face similar prejudices to Kya.

The most positive relationship comes in the form of Tate Walker, a childhood friend. As Kya and Tate grow closer through the years, she starts to reflect on love, or the absence of it, in the animal kingdom:

Kya watched other [fireflies]. The females got what they wanted – first a mate, then a meal – just by changing their signals. Kya knew judgment had no place here. Evil was not in play, just life pulsing on, even at the expense of some of the players (142-143).

When Tate makes a bad decision, Kya is even more convinced love is only a reproductive instinct: Mate and move on. It will take the love of a town, not just one man, to repair her fractured heart.

The murder mystery in Where the Crawdads Sing is not the true plot, which is a refreshing difference from most genre mysteries. In fact, if a reader tried to pinpoint the plot by its events alone, they would fall short. This story is sometimes painfully slow. There is little to no action. Time jumps are signaled only by a year printed at the beginning of each chapter, which can be confusing since the entire story (Kya’s past and present) is set in the reader’s past. However, this story is not about murder or the passage of time; it is about the Marsh Girl.

While the story may creep along, the characters’ lives are rich and developed, full of love and mistakes. Some of the main characters make bad decisions when faced with nearly impossible odds, and readers will find themselves wondering what they would do in such a situation. It may be Delia Owens’ debut novel, but it reads like a masterpiece. This coming-of-age story is perfect for anyone who wants to fully immerse themselves in the life of another, for better or worse.