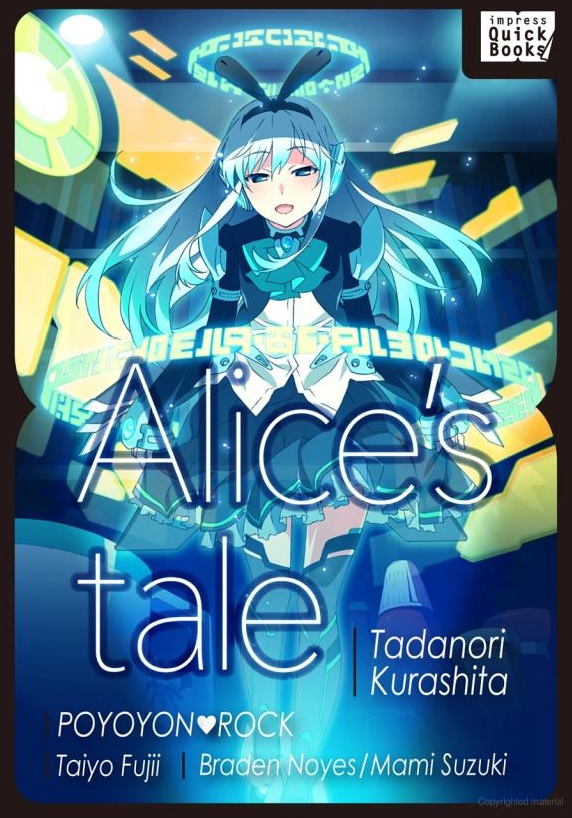 Note: This book was read through the Book Walker app—a digitalized application for PC and mobile devices, provided by Book Walker. Highly recommended!

Before March 2015, the light novella Alice’s Tale remained elusive to all but the most die-hard of otaku, willing to teach themselves Japanese. However, crowdsourced translation service, Conyac, held a contest wherein the winning submission would become the official English translation of Alice’s Tale. That victory belonged to Braden Noyes and Mami Suzuki.

Thanks to this translation team, Alice’s Tale has been made accessible to English readers through iTunes, Book Walker, and Google Play.

Positive Elements: Alice and her unnamed master hold a very special bond built on friendship and love (which appears refreshingly platonic for the most part). Alice acts on her own in order to protect her master and shows special interest in his everyday life. “It is enough for me to simply be by your side,” she tells him.

Spiritual Content: None, really. Alice is frequently likened to a real human and very life-like, but she’s a product of technology, not magic. There are some philosophical ramblings about how humanity’s mindset has changed with the onset of mass technology, though it would require a stretch to find anything spiritual within these pithy ponderings.

Violence: The protagonist speculates the potential of someone killing him with a planted bomb.

Sexual Content: Nothing beyond innocent, implied crushes. The unnamed male protagonist thinks about what sort of clothes would look best on Alice, and daydreams about her drawing a heart on his omelet. There’s a certain “waifu” vibe to their relationship, but nothing remotely sensual. It’s possible — even likely — that their relationship is entirely platonic.

Drug/Alcohol Reference: The protagonist ponders making a toast, but then considers that Alice can’t drink alcohol.

Other Negative Content: Dealing in stocks is a risky, manipulative business, and while the unnamed protagonist doesn’t necessarily do anything illegal, he does publish bogus editorials about the conditions of certain stocks in order to trick buyers and sellers into acting certain ways.

An unnamed, male protagonist considers himself a master stock-dealer. With the help of his A.I., Alice, he’s able to spot market trends and uncover the most hidden of company secrets in order to make the best purchases and sales. When Alice begins to behave strangely, the protagonist realizes this may be his riskiest trade yet. Dealing in stocks is competitive business, after all, and some investing rivals consider “playing dirty” the name of the game.

Much like Hosoda’s Summer Wars, Alice’s Tale takes a glimpse into an ever-foreseeable future, where the digital era has all but overtaken the suburban way of life. In the midst of a world so regulated that humans have no need of their flight-or-fight response, stock exchange remains the final frontier of excitement and danger. It’s within the confines of this cash-grab cage match that the protagonist is centered, and where the narrative focuses rather exclusively. 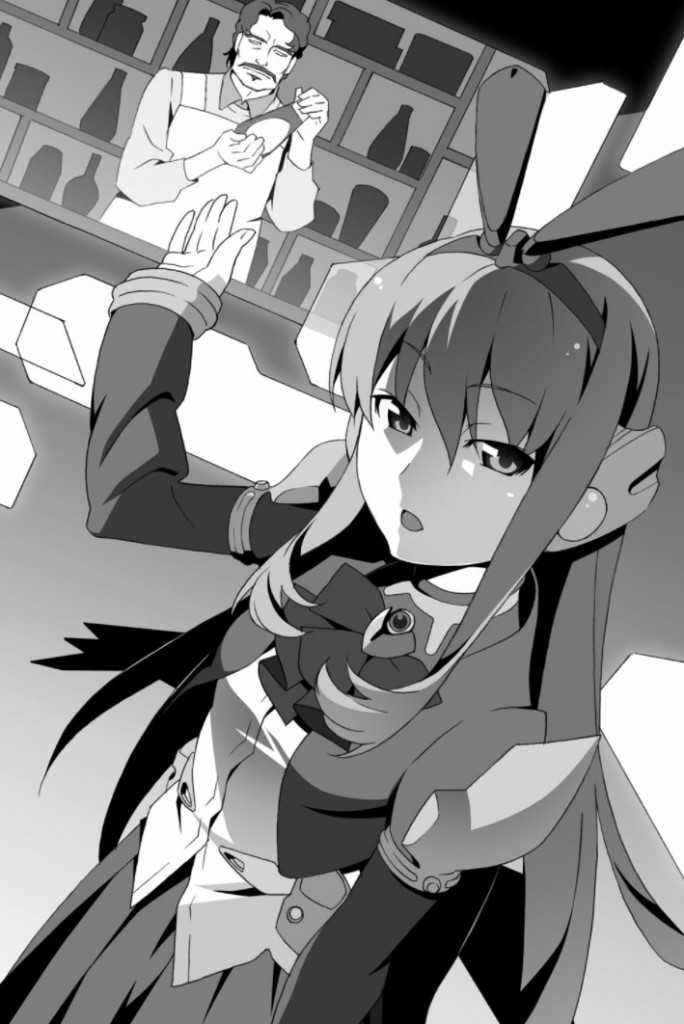 Perhaps if the story used stock-exchange as a plot-enhancer, rather than an end-goal state, it would feel less spliced-in. More than necessary, the focus is placed on the protagonist’s view of stocks and how those stocks affect the vaguely-painted world. It’s a shame, not because the stock element is unoriginal, but because the clincher of the story focuses more on Alice and her relationship with the unnamed protagonist than it does on the stocks themselves. The climax concludes almost as quickly as it builds, and Alice—the novella’s most interesting element—gets brushed aside in the midst of it. That’s mostly due to Alice’s role in the story being so secretive, but the narrative would have suffered less for involving her sooner.

With the focus more pinpointed and the individual elements of the story swapped around, Alice’s Tale could have the makings of an intriguing read. As is, the intrigue sets in too late, the fine details too early, and the character relationships are pushed to the back burner in favor of lifeless, inanimate elements—stocks, data, trading, and media. It’s likely that left-brain-favoring readers will find themselves bored at times.

The technical dialogue and philosophical musings of the protagonist target an older, familiar audience—one that balances the digital know-how of a tech-guru with the otaku subculture… or should. Alice’s Tale  shows that it knows its audience quite well, making it a shame that so little of the content truly focuses on the concept that would cause most otaku scoop up the novella in the first place: the kawaii shojou girl on the cover. 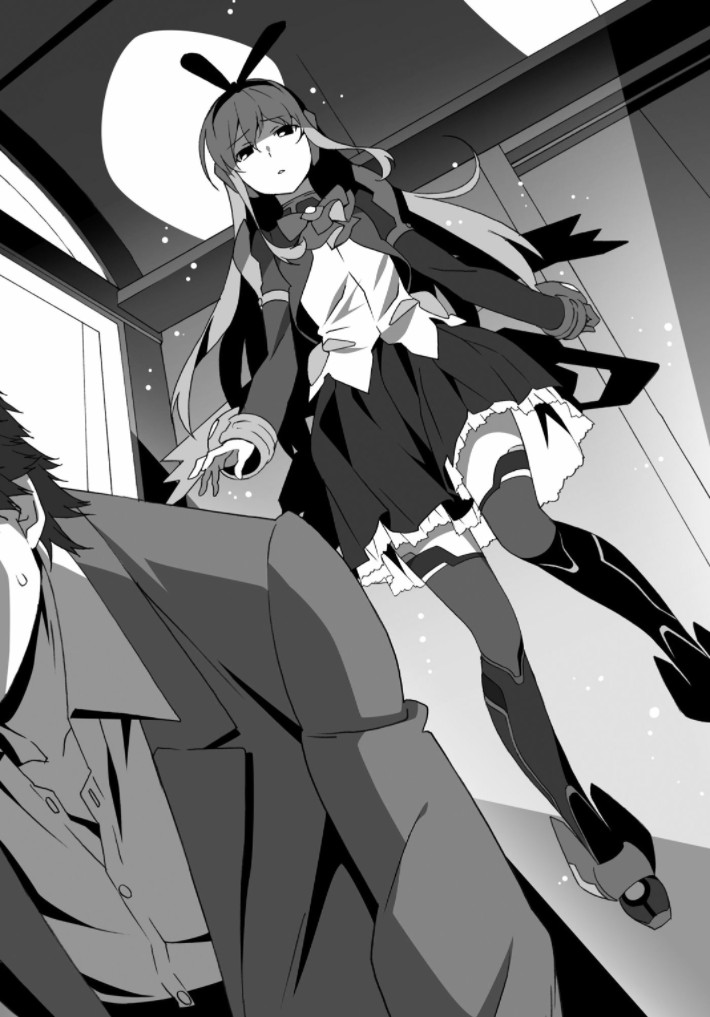 Alice is far more than a pretty face, though, and it’s a pity that more of her backstory and the motives behind her creation are never fully revealed (there’s the obvious assisting with stocks, but any personal or psychological reasons–such as a deep-rooted need for love or companionship–are held at bay). Her sense of loyalty and her brilliance make her worthy of the reader’s respect, and it’s refreshing to see an all-but-otherwise-implied platonic relationship between such a charming digital girl and her human Master.

At its onset, Alice’s Tale appears to be waifu material, with a fixed first-person perspective (even in the artworks), nameless male character, and coy observations of her femininity. It’s possible that Kurashita did intend to bait the hook a bit at the onset, but there’s no cyber-dating to speak of, meaning that the relationship culminates in a heart-warming demonstration of two friends’ love for each other. Refreshing to say the least, it’s a carefully concluded “love story” that’s helped in large part by an acute translation.

A solid English translation brings out each of the characters’ unique voices. With the protagonist frequently falling into philosophical flights of fancy, some genuinely interesting observations are made about the state of a world reliant on provisional safety and technology. Occasionally, metaphors become too thought-out, and the impact is lost, but more often their originality wins out. On the grammatical side of things, there are a few bugs—awkward changes in tense and “question marks” replacing dashes—but these aside, the choice of phrase is commendable.

Alice’s Tale is a straight-forward read, one without any remarkably stunning developments, but it does contain some conceptually interesting world-building and a few well-thought-out musings. Those anticipating a sci-fi story will instead receive a concentrated snapshot, spanning a few days’ time and featuring more slice-of-life than science. That said, for a very reasonable price, the more novella-minded otaku may find something charming, or at least inherently hipster, in Alice’s Tale, as it’s a one-shot undiscovered by the mainstream world.

Alice’s Tale is a straight-forward read, one without any remarkably stunning developments, but some conceptually interesting world-building and a few well-thought-out musings. Its "undiscovered" status will likely make it a must-read for otaku hipsters.